Each Friday, please visit our blog and join us as we take a look back at stories, people and events that have shaped who we are today. We are a family of survivors honoring our selfless heroes who paid the ultimate sacrifice for our freedom. We are grieving parents, spouses, children, siblings, grandparents, fiancées, battle buddies and loved ones. We are hope. We are strength. We are TAPS.

Ted Stevens, Sr., was an American statesman who served as a United States senator from Alaska from 1968 to 2009. After his death in 2010, Senator Stevens left a legacy of caring for the families of the fallen military. 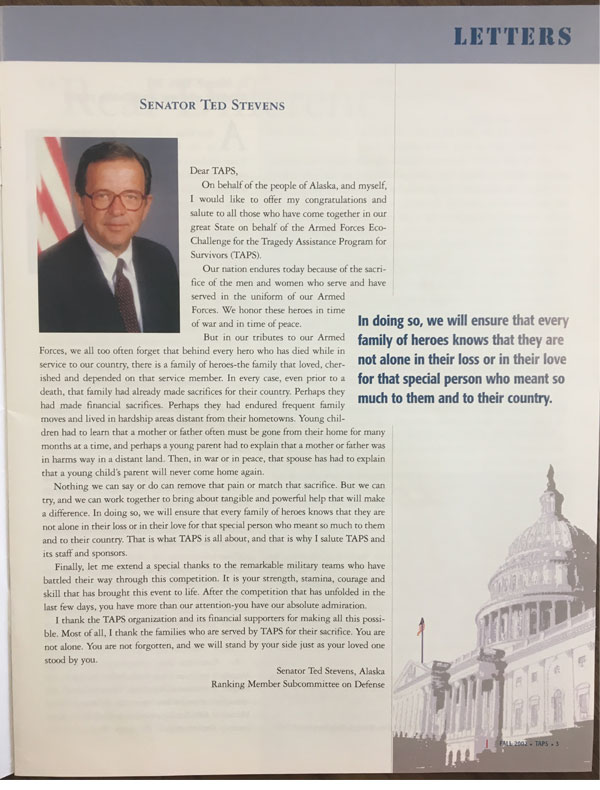 Following an Army National Guard plane crash in 1992, Ted delivered the eulogy for his friend, Brig. Gen. Tom Carroll. He recognized the gap in services for military survivors and guided Bonnie Carroll as she founded TAPS in Alaska to be the national nonprofit organization offering comfort and care for all those grieving the death of a military member.

The senator understood firsthand the toll traumatic and sudden loss can take on a family. His first wife, Ann Cherrington, died in a 1978 plane crash that Stevens survived. Years later, in a heartbreaking twist of fate, Sen. Ted Stevens was killed in a 2010 plane crash in Alaska. TAPS proudly continues to honor his legacy with the Ted Stevens Leadership Award.

Angel Pansini, surviving sister of Sgt. Nicholas Pansini, is a legacy mentor who will receive this year’s Ted Stevens Leadership Award at the TAPS Honor Guard Gala on March 6 in Washington, D.C.

We thought it fitting to share this letter written by Sen. Ted Stevens in 2002 for TAPS Magazine, thanking staff and sponsors for their work in supporting surviving military families.

Our nation endures today because of the sacrifice of the men and women who serve and have served in the uniform of our Armed Forces. We honor these heroes in time of war and in time of peace.

But in our tributes to our Armed Forces, we all too often forget that behind every hero who has died while in service to our country, there is a family of heroes-the family that loved, cherished, and depended on that service member. In every case, even prior to a death, that family had already made sacrifices for their country. Perhaps they had made financial sacrifices. Perhaps they had endured frequent family moves and lived in hardship areas distant from their hometowns. Young children had to learn that a mother or father often must be gone from their home for many months at a time, and perhaps a young parent had to explain that a mother or father was in harms way in a distant land. Then, in war or in peace, that spouse has had to explain that a young child’s parent will never come home again.

Nothing we can say or do can remove that pain or match that sacrifice. But we can try, and we can work together to bring about tangible and powerful help that will make a difference. In doing so, we will ensure that every family of heroes knows that they are not alone in their loss or in their love for that special person who meant so much to them and to their country. That is what TAPS is all about, and that is why I salute TAPS and its staff and sponsors.

I thank the TAPS organization and its financial supporters for making all this possible. Most of all, I thank the families who are served by TAPS for their sacrifice. You are not alone. You are not forgotten, and we will stand by your side just as your loved one stood by you.

We welcome your stories that we know can bring hope and healing to our TAPS families. If you would like to share a Flashback Friday story, we would love to hear from you. Email media@taps.org.