Whether you’re a seasoned runner or aspire to run your first 10K race in the fall, now is the time to start planning your training regimen and getting into the runner’s mindset. As spring gets under way, it’s a good time to shift our focus to getting outside to start running and walking more. At TAPS, we’re excited for the fall race season as we continue to make every mile memory in honor of our loved ones.

Jennifer Jamison is a runner who frequently wears the Team TAPS singlet — she has run nine marathons, 13 half marathons, two 50K ultras and many 5K races. 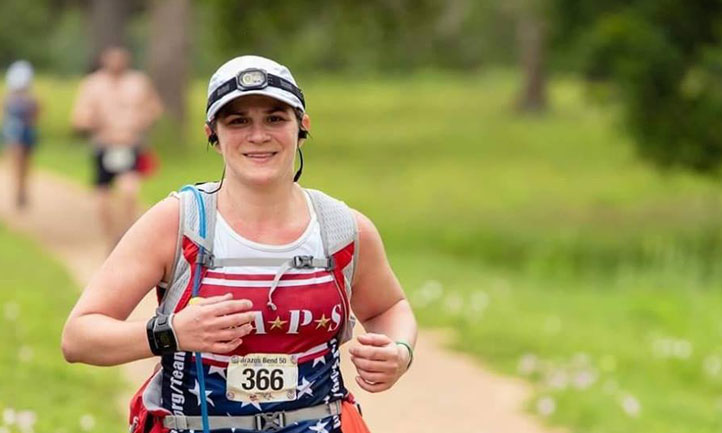 She came to TAPS after the death of a veteran friend. She wondered how she might honor his service, when another friend, Col. Ben Ringvelski, told her about TAPS. “Do what I do,” he said, “Run for TAPS.”

After learning about how TAPS supports families of the fallen, Jennifer signed up for a half marathon, and wore the TAPS singlet in a show of support for military fallen heroes and the families who carry their legacy. She was so inspired by who she met and what she saw on the course that soon after, she signed up for the Marine Corps Marathon.

“I love the MCM,” she said. “My favorite part of the course is the Blue Mile.” The Blue Mile is stretch of the marathon course in Washington, D.C., that displays photos of fallen service members. “I always am so struck by all of the faces. I've seen a family member find their hero photo, and pause. Some hug the photo, some stop to cry, some high-five that photo and take off. The end of that Blue Mile is a silent stretch full of U.S. flags. It's patriotic, reflective and is a real good reminder why I run.”

Over the years, Jennifer has raised funds in support of the TAPS mission, and been matched with surviving families to celebrate and remember the lives of their fallen heroes. The Fallen Hero Match program pairs runners with survivors and lets them know their loved one’s sacrifice will never be forgotten.

“I run for Army Sgt. Cody Legg, and his mother Bunnie. I run for Army Capt. Gil Munoz, and his sweetheart Emily,” Jennifer said. “I've got songs for those guys on my running play list, and I sing them when I'm feeling down, when the miles get overwhelming. I remember how hard those guys fought for my right to run all the time, anywhere I want to.”

Jennifer encourages other runners and would-be runners to consider their reason for running. For her, it’s more than being healthy, or losing weight. Her motivation for going the distance requires more than just crossing the marathon off a bucket list. “For me, it's TAPS. I think of my heroes, their loved ones left behind, and how strong and resilient they are to keep moving,” she said. “If they can keep on after that sacrifice, I can certainly tell my legs to finish 26.2 miles.”

Save the dates  for our favorite fall races:

Stay tuned! Find updates to Team TAPS events on the events calendar.  We look forward to seeing you on the course!

Hundreds of people every year, from experienced runners to those new to the course, participate in events throughout the country to remember and honor our fallen service members and raise funds to help TAPS assist the families left behind. You can participate in one of our Team TAPS events where TAPS has an organized team in the race, or you can run on behalf of TAPS at your local race or favorite event and create your own team. We’ll help you with a personalized fundraising webpage if you choose to raise money to support the TAPS mission. Email teamTAPS@taps.org for more information.