Editor's note: For more than 10 years, TAPS has comforted and cared for more than 11,500 surviving family members who have lost a military loved one to suicide. Each day, an average of three to four new survivors of suicide loss come to TAPS, and we welcome them with the warm embrace that can only come from those who truly understand their journey. This is the second installment in a five-part series about how best to support an individual and the community after a traumatic loss.

Like many people across the country, I felt like crying after hearing news of the suicide deaths of Sydney Aiello and Calvin Desir, teen survivors of the Parkland school mass shooting in Florida.  And then, only days later, Jeremy Richman, the father of Avielle Richman, a 6-year-old victim of the Sandy Hook mass shooting in Connecticut, also took his own life. We are all deeply saddened. The stories of their deaths reflect what so many survivors at TAPS know too well: the pain of traumatic loss can contribute to feelings of hopelessness—weeks, months, even years after a tragedy has occurred.

How the members of a family or community come together in response to a death by suicide—what we call postvention—is critical for long-term recovery, healing and health.  The TAPS Suicide Prevention and Postvention Team has developed a range of resources, programs and events that help survivors work through the complicated emotions that come with this type of loss. We’ve taken what we’ve learned and created a model of care to help survivors move through the pain of grief to a place where hope prevails. 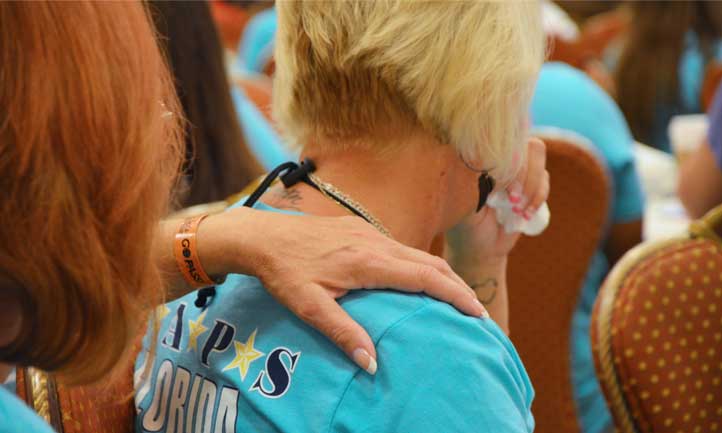 The natural course of trauma creates a cyclical, destructive pattern that can span decades and cross many generations within families and communities. Without a careful, fully informed plan of support, collective trauma, including a mass shooting in the community, can become collective helplessness. For the many thousands of survivors that we serve at TAPS who have lost their dearest loved ones often in sudden, violent ways, there is a culture of hope. How is this possible and how can we apply what works to support those whose lives are suddenly altered by senseless acts of violence?

Breaking a destructive pattern of hopelessness requires us to apply the best of our knowledge—both the wisdom of lived experience and the best practices of trauma-informed care for survivors. In the wake of a traumatic event like a mass shooting or a suicide loss, developing a best-practice plan for supporting survivors becomes critical for preventing suicide. There are four pillars to build a strong plan for supporting those impacted by traumatic loss. In the next few days, we will discuss each of these pillars as the focus of a four-part series.

1st pillar: Support must be Proactive

Supporting those impacted by suicide loss requires a proactive approach. In our work with other organizations, we have often observed a pattern of passive “resource offering.” This happens when survivors are briefed on the availability of supportive resources and invited to follow up on their own based on what they need. Often this comes from the best of intentions—out of motivations like “respecting someone’s grief” or “giving them space” to decide what is helpful in the wake of a loss. Unfortunately, this practice can make survivors feel even more isolated with their loss.

Further, in military units, we have often observed a pattern of responding to suicide attempts and completed suicides by offering standard suicide prevention trainings. In these situations, service members are often carrying a heavy burden of survivor guilt and feelings of personal responsibility. They ask themselves questions like, “What does it say about me that I missed the signs or that he or she didn’t trust me enough to tell me how bad it was?” Bringing in standard suicide prevention protocols which emphasize “recognizing the signs of risk” can increase their feelings of responsibility and self-blame, which can increase risk for further suicides. Recognizing the signs of risk is important, but in these situations, bringing in TAPS’ unique expertise in postvention to help stabilize units becomes critical. Assessing the impact of suicide, helping people understand the suicidal mind and decreasing self-directed guilt and blame among those affected is the most urgent need in the wake of attempted or completed suicides.

Traumatic loss is inherently destabilizing and disorienting. Survivors will benefit from a proactive approach that does not wait for them to “opt in” to get support. They benefit from the right support at the right time. TAPS Suicide Prevention & Postvention Team offers training and consultation on our best-practice postvention model. Our trainings help you to ask the right questions and line up the right kind of support so survivors will not have to suffer alone.

Shauna Springer, Ph.D., is the senior director of TAPS Suicide Prevention & Postvention Initiatives. She is a licensed psychologist with an undergraduate degree from Harvard University and a doctoral degree from the University of Florida. She previously served as a front-line psychologist in a Department of Veterans Affairs behavioral health clinic and has helped hundreds of warriors reconnect with their tribe, strengthen their most important relationships and build lives that are driven by their deepest values.