TAPS has been caring for all those who have experienced the death of a military loved one since its inception in 1994, where outreach to survivors was established to offer support and resources to all, regardless of their relationship to the deceased or the manner of death. Always striving to enhance and expand services to meet the needs of the survivor community, in 2008 TAPS began building a groundbreaking, new program specifically designed for military families bereaved by suicide deaths. Under the leadership of Kim Ruocco, Vice-President of Suicide Prevention and Postvention, nearly 13,000 military family members, loved ones, and friends have received services and support for their grief related to losing a service member who has died by suicide. As a program founded by survivors, run by survivors, and developed for survivors, TAPS offers specialized care and resources that are responsive to this population by addressing many of the complicating factors around suicide loss that can often compromise the healing process, thus providing vital encouragement and knowledge for survivors that they do not have to face their grief alone. 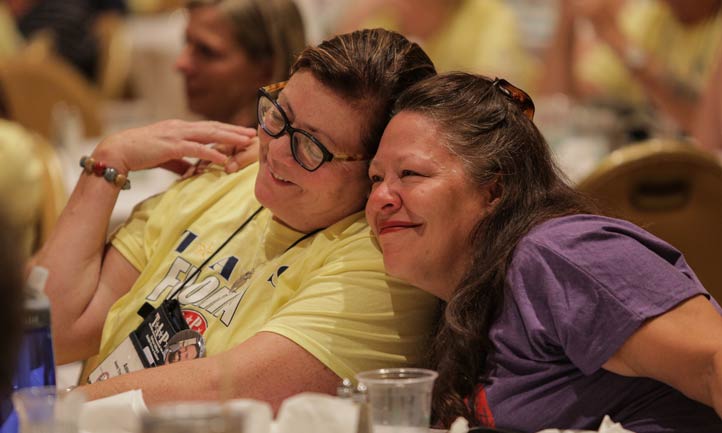 TAPS is the leading Veteran Service Organization in military suicide postvention, setting the standard in best practices and quality of care, so it is equally important to understand exactly what postvention is: an intervention or a strategy of support offered to survivors in the aftermath of a suicide attempt or in most cases, a death by suicide. The goal of quality postvention care is to reduce the likelihood that survivors will face complications that can interfere with or hinder their grief, and ultimately, to increase the likelihood that they have a pathway to guide them towards a more healthy grief journey and recovery. Additionally, family members and loved ones bereaved by suicide often experience increased levels or symptoms of posttraumatic stress, in particular, for those who had first-hand or immediate exposure to the suicide. Under these circumstances, survivors are often left to cope with trauma (in addition to their grief), and where it is critical to receive the appropriate professional help to address these specific issues. In such cases, TAPS can help offer referrals for a trauma-informed therapist or the clinical level of care that might be needed to help treat and reduce such symptoms.

With our staff of subject matter experts, combined with survivors who are peer support specialists, TAPS offers a range of immediate services allowing survivors to find a stable, healthy path to healing and ultimately allowing them to create and establish a new life after loss—a concept referred to as posttraumatic growth. A powerful example of this is the National Military Suicide Survivor Seminar and Good Grief Camp, which began in 2009. This annual event has given thousands of survivors of suicide loss the healthy coping skills and encouragement to begin a path toward healing for themselves as well as their families.

I went to the Suicide Survivors Seminar in October for the first time. It was 5 months after my husband Tim died and it was probably one of the hardest and most emotional experiences I chose to do. However, it felt good to be around people who were understanding, compassionate and who had an idea of how I felt and what I was going through. I am very thankful for TAPS, as their resources have been some of the most helpful things I have found since Tim died. ~ Melanie Spotts, Surviving spouse of Timothy Spotts, US Navy Veteran

Postvention care can address some of the most significant issues facing those bereaved by suicide, and it can be beneficial for survivors to understand some of the concepts that might be helpful in stabilizing their grief, such as issues which might include (but are not limited to) knowing that:

Based on the development of best-practice TAPS Suicide Postvention ModelTM and related programs and services for survivors, TAPS has also been an influential leader in external, outfacing suicide prevention and postvention initiatives. This includes partnerships with both national and international organizations, board representation on task forces, specialty committees, and other advocacy platforms (such as with American Association of Suicidology, American Foundation for Suicide Prevention, and National Action Alliance for Suicide Prevention) and thought leadership among national policy discussion and legislation related to military suicide (such as with the Defense Suicide Prevention Office and the Department of Veterans Affairs). Our Suicide Prevention and Postvention team offers subject matter expertise in areas of public messaging (such as with Op Eds and media statements in response to high profile suicides), specialty trainings and webinars on topics of prevention, intervention, and postvention, consultations with organizations in the military, public, and private sectors, and as major contributors to the field of suicidology.

This article was written by Dr. Carla Stumpf-Patton, TAPS Director of Suicide Postvention Programs and the Surviving Spouse of Sgt. Richard Stumpf, Jr., U.S. Marine Corps. Carla is a board-certified counselor who holds a doctorate in education counseling psychology and is a licensed mental health counselor and subject matter expert in the field of suicidology. She is a certified Fellow in Thanatology and holds certification as a clinical trauma professional.

TAPS offers a range of programming and resources to care for you in your time of need:

If you or someone you know has lost a loved one to suicide who served in the U.S. Armed Forces, regardless of duty status, we are here to help. Call 800-959-TAPS (8277) or visit TAPS Suicide Loss.

If you, or someone you know, may be struggling with thoughts of suicide, please seek immediate help by: calling the National Suicide Prevention Lifeline at 800-273-8255 (Veterans press 1) or 911, texting the Crisis Text Line at 741741, or visit the nearest emergency room.