The sign “Empowered women empower women” greeted visitors as they were welcomed to the SheBelieves Cup, an international women’s soccer tournament. SheBelieves Cup is held in the United States every year and invites women’s national teams around the world to come together to show their talents and efforts both on and off the field. It was created to empower and inspire women and young girls around the world to be a part of something bigger than themselves, and encourage the next generation to give back to their own communities. This year, national teams from Japan, England and Brazil joined the U.S. national team with that mission in mind. 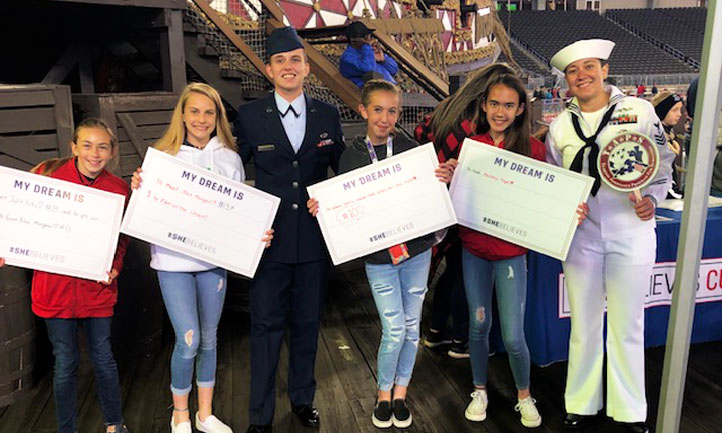 Thanks to the generosity of U.S. Soccer, TAPS families and Military Mentors attended and participated in special events at each of the three tournament locations — in Pennsylvania, Tennessee and Florida. The SheBelieves Captains were our very own TAPS Military Mentors. This honor gave the mentors the opportunity to lead the national teams out of the tunnel while carrying the SheBelieves Cup Trophy. After the game, the TAPS mentors met with the coach and some players from the U.S Women’s National team.

Senior Mentor and Assistant Group Leader Sgt. 1st Class Nicole McMinamin attended the games in Chester, Pa., and said she was proud to represent TAPS at such a symbolic event. “To be at the SheBelieves Cup representing TAPS and families who have lost loved ones was an honor,” she said. “U.S. Soccer allows TAPS into their organization and has a special place in their hearts for the families and their sacrifices.”

The surviving family of Sgt. 1st Class Charles Adkins attended the game in Nashville, Tenn. After the game, the Adkins family walked onto the field for a group photo in the goal. Surviving daughters, Mackenzie and Gabriella Adkins, loved that this tournament was “a way of showing that girls are just as strong as anyone else.” They said the experience gave them the opportunity to remember their dad and all of our fallen heroes.

TAPS Military Mentors, Airman 1st Class Brianna Johnson and U.S. Navy IS1 Iliana Martinez, participated in the final leg of the tournament in Tampa, Fla. As honorary team captains, Brianna and Iliana proudly carried the trophy and escorted the national players onto the field to prepare for the last night of competition on March 5. At the end of the second match of the night, both mentors participated in the trophy ceremony by carrying the tray of medals to be presented to each member of the winning team. Throughout the evening, they were able to share the message and mission of TAPS to those they met.

Sport, similar to grief, is a universal language. It has a special way of uniting people of all backgrounds and encouraging them to work together to lift others up while still working to better themselves. This international showcase of community, camaraderie and compassion displays values that resonate with our TAPS family. It was an honor to have TAPS families and TAPS Military Mentors come together as they represented the organization and all those who have lost a loved one in military service to our country. 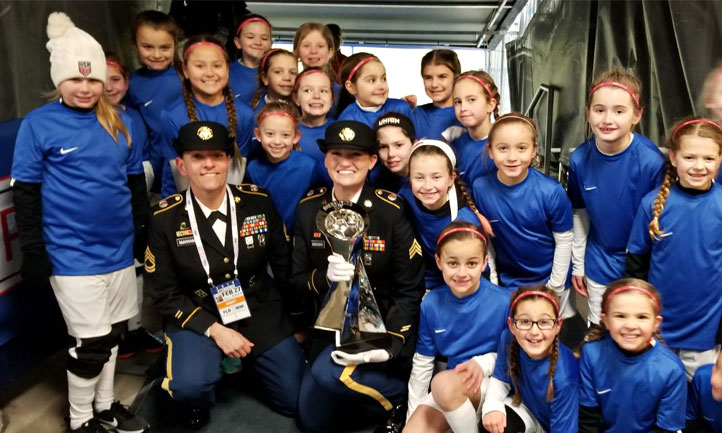