Writers note: This story contains topics related to mental health and suicide. If you are experiencing emotional distress or thoughts of suicide, help can be found by contacting the National Suicide Prevention Lifeline at 1-800-273-8255 (Veterans Press 1), or by contacting the National Crisis Text Line by texting “HOME” at: 741741. For immediate assistance, please call 911 or go to the closest Emergency room.

All eyes are on Hollywood this weekend as the film industry gathers to celebrate the work of so many talented artists, but this year is different.  Media attention surrounding the Academy Awards is perennial, but this year, with the attention surrounding A Star is Born starring Bradley Cooper and Lady Gaga, we have a unique opportunity to advance the conversation about mental health issues, specifically, the topic of suicide.

In the field of suicidology, we know that how we depict and discuss suicide can influence those who may be most vulnerable to suicide and impact the actual rates of suicide.  When stories are delivered in a safe and responsible manner, they can drastically reduce suicide contagion and rates of deaths by suicide.  This is not an attempt to offer a review of the film, analyze performances, or endorse awards, but rather, to address the topic of mental health in the movies as a chance to safely talk about the issue in a public forum directed at awareness and prevention.

For those who are not aware of the story line in A Star is Born, (and without divulging too much of the plot) it is safe to share that the film has been remade into 4 versions in the last 82 years (1937, 1954, 1976, and 2018) and each version has stayed close to the original theme.  The different versions of the film have appealed to separate generations over the past eight decades because of what they have in common. They each speak to the beauty of love and the heartache and struggle around loss and grief.

With the depiction and details of suicide, however,  the viewer needs to make an informed decision about if they are in an emotionally stable place to view the film.  This is particularly true for those who may be vulnerable to suicide, or for the bereaved who have experienced a recent loss.

Entertainment in artistic works like literature, music, and film, can give us a sense of adventure and often evoke feelings of excitement, intrigue, joy, or sorrow, especially if we empathize with the experiences of the characters. While some movies might be for pure entertainment, action, or adventure, others have the capacity to move us to deep emotion where we connect with the experiences of others. Watching a film might resonate so deeply within us that we actually feel  for the character(s), thus eliciting emotional reactions (like when we often refer to a story or film as a “tearjerker”).

The experience of feeling, and even crying, is not a negative concept by any means.  Emotions are meant to be felt; in fact, they can even be therapeutically cathartic and emotionally healthy to process difficult emotions.

When a film touches on issues of the human condition and viewers are emotionally impacted by topics like this, we must seize the opportunity to advance the dialogue about mental health and the psychiatric issues we face. Open conversation affords us the opportunity to educate about suicide prevention and suicide-related grief and loss.  We can offer helpful resources and share stories of hope that we know can save lives.  But, what is key, is how we safely advance the conversation about suicide in terms of how it is covered by the media.

The honest truth is that suicide is ugly.  It is not something to be glorified or misrepresented.  Suicide is devastating, it’s dark, it’s graphic, and leaves in its wake a traumatic aftermath of destruction. Sadly, we too often ignore the painful reality of suicide until it hits close to home.

In today’s society, depression, addiction, and suicidal thoughts or behaviors are part of what we face, but there is hope.  As professionals, we know these conditions are treatable and preventable. In spite of the fact that the topic of suicide is often overlooked, we must continue to build awareness because for every person who has attempted or died by suicide, there are countless numbers of people surrounding them who are impacted and may be in the need of care and support.

When suicide is addressed in films, it brings up questions and discussions about, “why this happened”.  It comes back to a need for awareness about risk factors and warning signs to help us know when someone might be struggling with thoughts of suicide. One source we can turn to is The American Association of Suicidology which offers resources and strategies on how to best help those in an emotional crisis who may be struggling with thoughts of suicide.

Suicide is a complex phenomenon.  It is a multi-factored event that cannot be minimalized as resulting from a single incident or explained by a simple definition. For those struggling with thoughts of suicide, it can involve intense suffering with emotional pain, combined with feelings of burdensomeness, hopelessness, isolation, and psychological anguish.

In this mental state of mind, when options may be perceived as narrow and limited, it can be difficult for the individual to see helpful solutions.

It is important to note that the majority of people with thoughts of suicide do not go on to die by suicide, and in many cases, the situation can be helped and resolved. This is why it is critical to openly talk about suicide directly and honestly, without judgment or stigma. This awareness (based on accurate information from experts in the field) can reduce obstacles to seeking care, circulate the available resources, and promote the concept that there is another option beside suicide, which includes staying safe in an emotional crisis by seeking help from one’s support system or seeking professional help. To learn more, read the related article Understanding Why People Die by Suicide.

For the bereaved survivors impacted by suicide, the process can involve a complex grief trajectory where survivors of suicide loss often have very unique needs, thus requiring specialized support in terms of stabilization efforts. These survivors of loss often experience higher levels of trauma due to the death of their loved one, which must be met with trauma-informed care by those specializing in suicide postvention services and grief support. It is important to acknowledge that their story is not just defined by the final moments of how their loved one died.  These are real people, with real lives that have been irremovably changed, but have beautiful stories of the love that was shared prior to the loss.

You can learn more about the TAPS Suicide Postvention Model, which explains more about the services provided to military families coping with suicide loss.

Another consideration is how we use safe messaging. Responsible language used in media reporting of suicide matters significantly. To reduce the risk of suicide we must promote help-seeking behaviors and offer hope and compassion to those who might be suffering.

When suicide is addressed in the public forum, language matters.

Reports on high profile deaths of celebrities or those seen in the public eye, can serve to educate the public by initiating conversation about how suicide impacts all, regardless of income, religion, age, gender, race, or socioeconomic status.  You can learn more about recommendations for reporting on suicide on their website.

We also applaud those in the public eye who have effectively used their art and subsequent media attention to address mental health issues. Such is the case with the cast and crew of the recent adaptation of A Star is Born.

Actors like Bradley Cooper and Stefani Germanotta, a.k.a. Lady Gaga, have used their powerful platform to promote discussion and affect change.  By making a poignant storyline relevant to all, they’ve helped us reduce stigma, promote resources and convey the message that people are not alone. Bringing this dialogue to the public forum changes how society views mental health and encourage people to seek help.  With help comes hope that people can get better and lives can be saved. 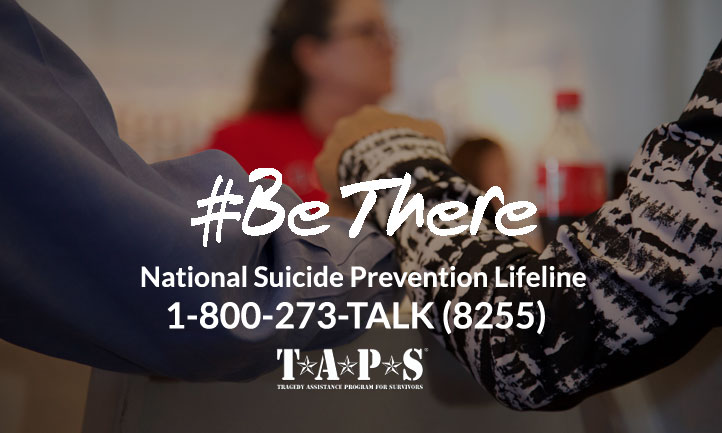 If you need grief support for your military related suicide loss, TAPS is here to help. Our 24/7 Helpline is 800-959-8277. If you, or someone you know, may be struggling with thoughts of suicide, please seek immediate help by: calling the National Suicide Prevention Lifeline at 800-273-8255 (Veterans press 1) or 911, texting the Crisis Text Line at 741741, or visit the nearest emergency room.

This article was written by Dr. Carla Stumpf-Patton, TAPS Director of Suicide Postvention Programs and the Surviving Spouse of Sgt. Richard Stumpf, Jr., U.S. Marine Corps. Carla is a board-certified counselor who holds a doctorate in education counseling psychology and is a licensed mental health counselor and subject matter expert in the field of suicidology. She is a certified Fellow in Thanatology and holds certification as a clinical trauma professional.