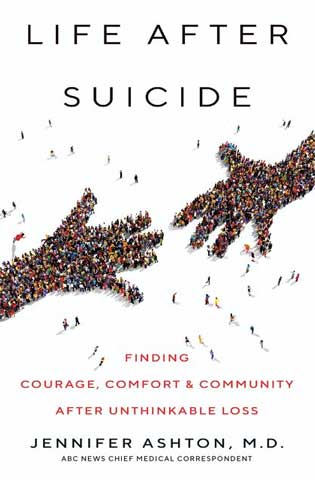 A new ABC Radio podcast, called “Life After Suicide,” hosted by Dr. Jennifer Ashton, chief medical correspondent at ABC News, launched this week. Dr. Ashton draws from her tragic experience to explore the aftermath of suicide and sudden loss. The podcast is a roadmap to survival, offering inspiring insight on how to regain balance and get back to life. She speaks with people living with loss who have moved through guilt, anger and hopelessness to a new normal as well as with survivors and specialists in medicine, faith and more on how to heal from any type of traumatic experience.

Dr. Ashton witnessed firsthand the impact of a loved one’s suicide. When her ex-husband killed himself soon after their divorce, her world—and that of her children—was shattered. Though she held a very public position with one of the world’s largest media companies, she was hesitant to speak about the personal trauma that she and her family experienced following his death. A woman who addresses the public regularly on intimate health topics, she was uncertain of revealing her devastating loss—the most painful thing she’d ever experienced. But with high-profile suicides of celebrities in the news, Dr. Ashton recognized the importance of talking about her experience and the power of giving voice to her grief.

The podcast has launched in tandem with the release of Dr. Ashton’s new book, “Life After Suicide,” in which she opens up for the first time, hoping to inspire those faced with the unthinkable to persevere. Part memoir and part comforting guide that incorporates the latest insights from researchers and health professionals, “Life After Suicide” is both a call to arms against this dangerous, devastating epidemic, and an affecting story of personal grief and loss.

In one chapter, Dr. Ashton shares the story of TAPS Vice President of Suicide Prevention & Postvention Kim Ruocco’s journey with the suicide loss of her husband, Marine Maj. John Ruocco. Ashton recalls that from the moment the two women meet, there was an instant connection. Both women are mothers who lost men they loved to suicide. Both are health professionals who after many years, still wonder what they could or should have done differently to prevent their loved ones’ suicides. Together, they are working to proactively increase an understanding of mental health issues and end the stigma of mental illness.

“May is Mental Health Awareness Month and a time for us to remember that we’re not alone in our struggles,” says Dr. Ashton. “I want listeners to find solace in others’ stories and be inspired to find their personal path to healing, joy and a life with new purpose.”

The eight-part podcast is available for free on Apple Podcasts, Google Podcasts, TuneIn, Spotify, Pandora, Stitcher and the ABC News app, with new episodes posting every Wednesday. The first episode features a conversation with television personality Melissa Rivers, who opens up about life after her father, producer Edgar Rosenberg, died by suicide and her mother, Joan Rivers, suffered an unexpected death.