A grateful and hopeful spirit has helped Maggie Bainbridge through the darkest times, including the six years her husband, Bill, was battling cancer and the four years since he let go of the pain and died in her arms.

She is grateful for the time she had with him. “We were so happy,” she says. “I would rather have 18 years with him than none.”

She is grateful that retired Army Major William J. Bainbridge IV, who died on October 30, 2015, is still with her and their two children, Matthew and Elizabeth, now 16 and 12 respectively. “Bill’s body is at Arlington, but he’s in Heaven so he’s with us all the time.” 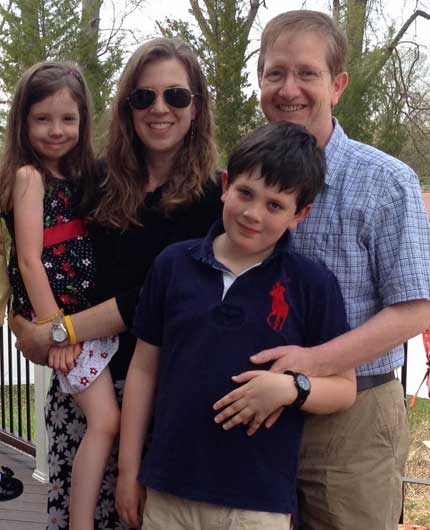 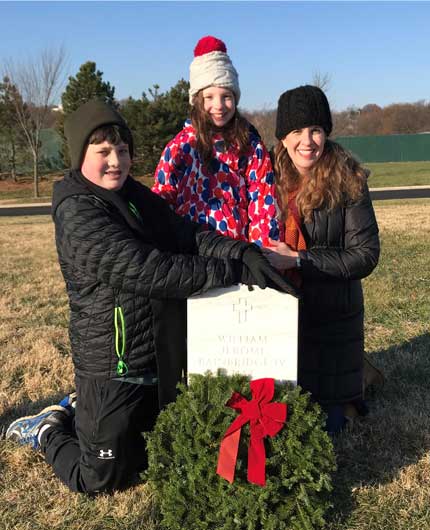 “Bill was amazing,” Maggie says. “He was amazing on earth and he’s amazing in Heaven. He’s with us. I feel like he’s busier now. We see these signs that are Bill’s way of saying, ‘You know, I got you.’ ” TAPS President and Founder Bonnie Carroll calls these signs Godwinks, and Maggie said they see so many of them that she’s started writing them down.

One Christmas Eve, while the family was visiting Bill in Section 57 at Arlington National Cemetery, a Godwink came in the form of a young child’s Superman balloon. To them, Bill was—will always be—Superman.

They saw a sign on November 2, 2016, when Bill’s beloved Chicago Cubs won the World Series for the first time in 108 years. “The last gift he gave us,” Maggie recalls, “he bought four Cubs caps. He was buried in his.”

They saw another sign on October 30 of this year when his other favorite baseball team, the Washington Nationals, beat the odds to win a World Series of their own—on the fourth anniversary of Bill’s death. “October 30 was a really rough day, but it was outstanding,” Maggie says, adding that time at the ballpark was “our happy place.”

“We’d go, he’d watch baseball, and the kids and I would eat,” she says. “Bill was having a good time watching the game and we were having good food. As he got sicker, we put the MLB app on his iPad,” Maggie said. “We’d watch during his chemo. Family time was spending time with Bill in an infusion room.”

The kids would ask him whom to cheer for when the Nationals and the Cubs played each other. “You root for the home team,” Maggie says he taught them. Rooting for the home team this year included a chance for Maggie, Matthew, Elizabeth and Maggie’s mom, Fran Bullard, to walk with other TAPS families in the Nationals championship parade on a spectacular fall day in Washington, D.C. “I am very grateful for TAPS, that we’re able to do things like this that honor Bill.” 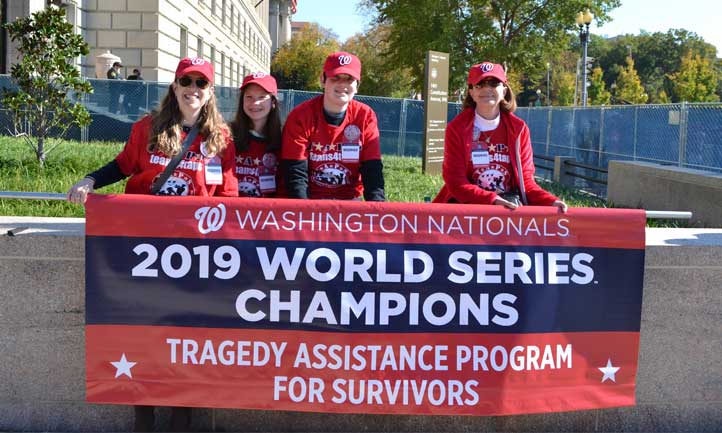 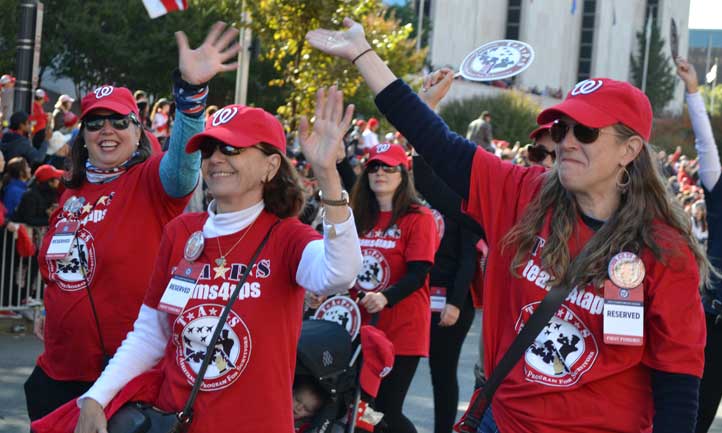 It wasn’t easy for Maggie, who was in a lot of pain related to an autoimmune disease, to walk in the parade, “but I had to do it for Bill,” she says. “I told myself, ‘I can do a mile.’ It was an amazing day. It was magical. There are top moments in your life. This parade was one of them.”

Grateful for Professional and Peer Support

Maggie is grateful for her grief therapist, who helped her through the first three years, which she describes as horrid, and whom she continues to see. “You need to cry. You need to feel your grief at some point. You’ll feel it now or you’ll feel it later.”

She is grateful for her TAPS “sister wives,” the other young widows who have been a source of comfort and understanding. They live across the country, but they check in on each other all the time. “I have all these amazing women through TAPS who understand what I am going through,” Maggie says. “With TAPS, they encourage us to all get together and not pigeonhole us by how our husbands died,” she said. “Loss is loss is loss. What matters is how they lived. We were all married to amazing men.”

With her sister wives, she can laugh now about how she “ugly-cries” and how she didn’t shower for months and ran errands in her pajamas. “If you’ve not been through it, you just don’t understand,” she says. When Maggie decided to try dating again, her sister wives understood when she felt like she was cheating on Bill. They understand her undying love. “I still love Bill. I will always love Bill,” she said. “Widows understand that.”

And they are happy that she has found a boyfriend, a man who lost his wife to breast cancer, who is great with her kids and also understands that she will always love Bill.

Because Maggie understands how important the support of other widows has been to her, she volunteers as a peer mentor, helping others who are new to grief realize that everyone has their own timeline in grief and that none is better than the other. “Being a peer mentor is the least I can do for how much TAPS gave to me.”

TAPS has also been a blessing to Matthew and Elizabeth, who went to their first Good Grief Camp in 2016, several months after Bill died. “The kids were like, ‘We’re with other kids who understand.’ I told them that as long as they want to go, we’ll make it happen,” Maggie says.

Things like camp and the World Series parade have allowed the Bainbridge family to create some new memories, all while honoring Bill. “The parade, they were beaming for Daddy,” Maggie says. “They are proud of him and the life he lived. They love their Dad. Adding some happiness or joy into what’s really a sad situation, it’s priceless actually.”

Kathy Bold is the director of survivor communications for TAPS.

‘I am very grateful for TAPS, that we’re able to do things like this that honor Bill.’