This opinion piece was originally published in The Oklahoman on September 13, 2019. It is reprinted here with permission.

The day my dad died was the worst day of my life. I was 10 when two officers in dress uniforms showed up at our door to tell us that a routine day of training had turned into our worst nightmare. It was April 12, 2002, and the Army was preparing for war. My dad, Sergeant 1st Class Jeffrey Haycock, was the first post-9/11 casualty at Fort Sill, Oklahoma and no one really knew what to do.

Within the first 72 hours, my mom had to make numerous unalterable decisions. Some had to do with funeral arrangements and where to bury my dad, and some had to do with our family and where to move our home. At the time, we were living on the Army post and were required to vacate our base housing within 90 days.

None of these decisions were easy, but the most challenging of all were the financial decisions. My dad was the breadwinner in our family. Having been in the Army for 16 years, he earned considerably more than my mom, who was also employed. Even so, my parents had always presumed that if anything ever happened to my dad, we would be taken care of. Just hours after that fateful knock at our door, we discovered how wrong they were.

The Army determined that my dad died “in the line of duty,” so my mom was eligible for Dependency and Indemnity Compensation (DIC) benefits from the Department of Veterans Affairs of $1,200 per month. This alone was nowhere close to my dad’s salary, but my mom was also eligible to receive his retirement benefits and Survivor Benefit Plan (SBP). Initially, my mom was under the impression we would receive both the DIC and SBP payments, only to learn later that for every dollar we received in DIC, we would lose a dollar in SBP. This has long been known as the SBP/DIC Offset or the “Widow’s Tax.”

For almost 20 years now, Congress has attempted to correct this injustice but still has yet to do so. My mom advocated passionately for the elimination of the offset, frequently meeting with our Oklahoma senators at the time — Tom Coburn and Jim Inhofe — and our local state representatives. She was tenacious and remained an advocate for military families until her own untimely death a few years ago. 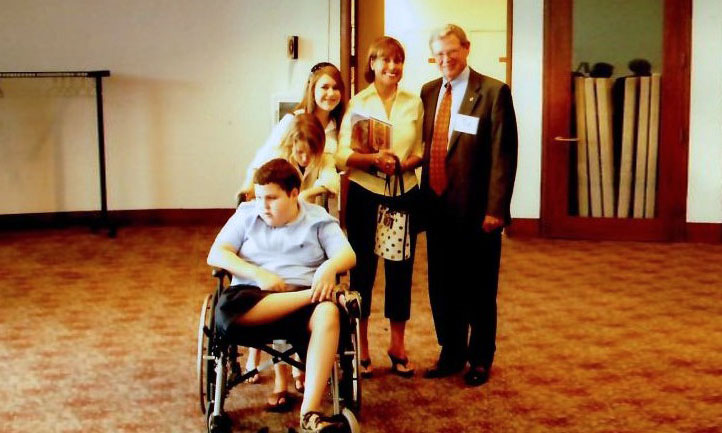 Oklahoma Senator Jim Inhofe, right, is shown on Capitol Hill in 2006 with Nichole Haycock, second from right, and her children, Ashlynne, Weston and Colton Haycock. Photo courtesy of Ashlynne Haycock.

My own love of policy and advocacy was inspired at a very young age walking the halls of the U.S. Capitol with my mom. I learned to fight this fight right alongside her and distinctly remember the first time we met with Senator Inhofe. He was appalled by this injustice and immediately signed on as a cosponsor to legislation that would eliminate the offset. He promised my mom then that we would end the Widow’s Tax to ensure families like ours who had made the ultimate sacrifice would receive all the benefits earned by the service and sacrifice of their loved one.

When it was announced that Senator Inhofe would be the new chairman of the Senate Armed Services Committee, I was ecstatic. I had not forgotten the promise he repeatedly made to my mother to fix this problem impacting so many military families. With renewed confidence, I was certain that 2019 would be the year the Widow’s Tax would finally be eliminated.

Earlier this year, when the legislation to fix the issue was not included in the Senate version of the defense budget, I was shocked and personally discouraged. I did not understand how this could happen — our senator had been such a champion for surviving military families for the past 15 years. Surely, he understands the devastating impact this offset has had on 65,000 military widows and their children. That said, Senator Inhofe did, in fact, make an impassioned speech on the Senate floor urging his colleagues to finally get this done. The House of Representatives, thankfully, did include an amendment to eliminate the Widow’s Tax in its version of the defense budget. Now, the two bills will go to conference where both chambers will work out the differences and decide on a final budget for the coming year.

As an advocate for the Tragedy Assistance Program for Survivors (TAPS) and the 1,503 widows currently impacted by the offset in Oklahoma, I trust Senator Inhofe will keep his word to us and encourage his colleagues to honor the commitment he made to my mother, Nichole Haycock. In Oklahoma, we keep our promises. I look forward to Senator Inhofe and Congress keeping theirs. Together, we must make this the year we finally eliminate the Widow’s Tax.

Ashlynne Haycock is the deputy director of Policy and Legislation at the Tragedy Assistance Program for Survivors (TAPS) and serves on the Department of Veterans Affairs Advisory Committee on Education (VACOE). She is the surviving daughter of U.S. Army Sgt. 1st Class Jeffrey Haycock, who died in the line of duty in 2002, and U.S. Air Force veteran, Nichole Haycock, who died by suicide in 2011. She graduated from American University with a bachelor's degree in political science in 2013. While at American University, she was one of the first recipients of the Marine Gunnery Sergeant John Fry Scholarship.