The need to be understood and connect with others is key to finding hope and healing. Every month, hundreds of our TAPS family members are embraced in Care Groups to have honest discussions about grief and loss in a safe space. Although these gatherings are not therapy, they are therapeutic and allow us to explore the emotions we encounter on our grief journey. We find comfort in the supportive company of others, knowing we are not alone.

Since September, TAPS has doubled the number of Care Groups supporting survivors in communities across the country. Behind the effort to expand Care Group outreach is Tara Woodruff Dukes, who joined the TAPS staff to manage Care Groups last year. 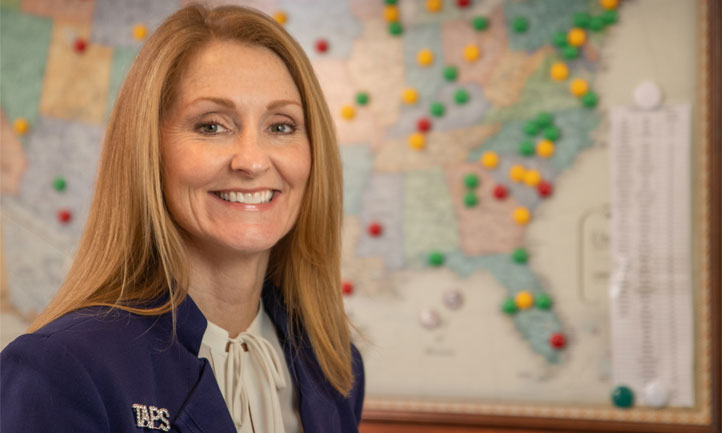 Tara came to TAPS soon after she lost her husband, Lt. Cmdr. Jay Woodruff, in 2009. At her first TAPS event, she met many survivors just like herself and said she had never been hugged so much. For the first time, in a long time, she remembered how to smile.

A few years later, attending another TAPS event, Tara began to feel strong enough to help other military family members cope with the pain she so intimately understood. At a TAPS Women’s Empowerment Retreat, her group created vision boards and dedicated time to developing short- and long-term goals. “At that retreat I realized how much I still wanted to do,” she said. “With the death of my first husband, I came to know how short life is.”

The dream she envisioned materialized not long thereafter. She found the courage to resign from a demanding corporate position and dedicate time to soul searching through painting and journaling. She also trained to become a TAPS Peer Mentor.

“The support I received from TAPS changed my life,” Tara said. “The time spent with other survivors at the retreat sparked my desire to serve others.” As a Navy veteran with a background as an ER nurse, Tara was drawn to helping veterans and military families. It was meant to be when an opportunity to work with TAPS was soon presented. “I was honored to accept a position to support those grieving the loss of their service member."

Tara joined the TAPS staff to manage Care Groups and expand the peer-based program in local communities across the country. She also leads the Care Group for survivors in the D.C. area. “It’s been a privilege to hear survivors' stories and witness their pain and vulnerability,” she said. “Knowing that while I can’t cure their pain, the simple act of being present, engaged and listening contributes to their healing in some way.”

In 2019, with the support of Peer Mentors nationwide, Tara hopes to expand the reach of TAPS Care Groups. “We want to make sure that even more survivors have access to TAPS Care Groups. We have a list of cities where there is a need and our team is determined and ready to fill that need.”

If you would like to join a TAPS Care Group go to our Care Groups page to find a group near you.

If your are a TAPS Peer Mentor interested in starting a Care Group in your area, contact CareGroups@taps.org, or call 800-959-TAPS (8277).