Once a year, the “giants” in the field of thanatology gather in one place for a whirlwind experience of education, networking and collaboration. Last week, I had the honor of representing TAPS at the 41st ADEC Conference in Atlanta, Georgia. The Association for Death Education and Counseling is the leading organization in thanatology, the study of death. ADEC is the oldest organization in the field of dying, death and bereavement. As a nonprofit, the mission of ADEC is to “enhance the ability of professionals and laypeople to be better able to meet the needs of those with whom they work in death education and grief counseling.” You will often see “CT” or “FT” following the names of many TAPS staff. This is a certificatation through ADEC that endorses an individual as a certified thanatology professional or fellow in thanatology, an advanced certification for thanatology professionals. 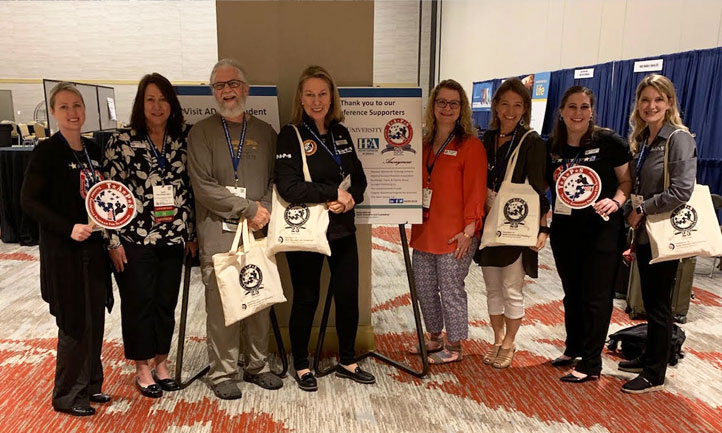 Thanks to the TAPS Institute for Hope and Healing, we have seen many of the leaders in the field of grief facilitate webinars at the TAPS Institute (many of which are listed in our webinar archives). It was awe-inspiring to be in the same room with some of the very people who have professionally shaped the field to which my life and my career are now dedicated.

Along with TAPS President and Founder Bonnie Carroll and a few other TAPS colleagues, we presented the TAPS mission to hundreds of other attendees throughout the four-day event. We were joined at the conference by professionals, clinicians, scholars, academics and survivors. This year, TAPS was once again the seminar’s primary sponsor. At check-in, each person was given a beautiful bag and lanyard both with the TAPS logo. Many people approached our table and said, “Tell me about TAPS. I had never heard of you before I saw my bag.” Inevitably, when one of us began describing TAPS, the person would share their personal story and relay how necessary they believe the TAPS mission is. I was convinced from the moment we hung the TAPS banner behind our table that we were accomplishing important work.

Each day, the seminar had several sessions at the same time, all with fascinating topics. It was hard to choose which ones to attend. I went to one presented by J. William Worden, Ph.D., himself! Dr. Worden is a professor of psychology at Harvard Medical School and the author who conceived the “Four Tasks of Mourning,” a framework that helps to show how people journey through grief. He was presenting on his classic tasks of grieving and discussing with a fellow colleague how they are still valuable today. In another session, I heard Robert Neimeyer, Ph.D., speak on a panel with other accomplished professors. He coherently described his thoughts off the cuff and in a way that brought clarity and conclusion to the session.

For me, the most meaningful session was not one I would have expected. It was not presented by anyone famous or published, or with a flashy degree. Rather, Rebekah Near, like me, is a therapist and a mom. In an hour filled with gut-wrenching honesty, she shared her story of miscarriage and how she found life again after the death of her baby. She shared videos of talking to her children in utero. She concluded the hour by playing a song she wrote and recorded. Three lines from the chorus have stayed with me for days: “In this body I’ll live / In this body you’ll die / My womb now your tomb.”  When the song ended, there was not a dry eye in the room.

At TAPS, we embrace many aspects of “disenfranchised grief,” or, a kind of grief that is not often acknowledged by society. TAPS recognizes that grief comes in all shapes and sizes, and may affect anyone. After the suicide of my brother, Airman 1st Class Caleb Kelley, I could not imagine a more traumatic loss. Sibling death and suicide loss are often considered two examples of disenfranchised grief. For me, it was a very long and lonely road to healing. My journey had many turning points, but I remember one in particular. I was about 19 months out from my loss and it occurred to me that even though Caleb’s death was extremely traumatic, other survivors had also experienced just as much trauma. I wanted to hear and hold other people’s stories, and not just my own.

I learned after Caleb died, my pain was just as painful as the person next to me. Like Rebekah described in her story, her grief is real, even if the world does not acknowledge her reality. At TAPS, we strive to be a family that recognizes and respects the grief of all of our survivors — no matter the relationship to the deceased, no matter the manner of death. We also understand the loss of your loved one in the military is likely not your only loss. Whether you are grieving another death or a loss of a different sort, please hear that TAPS loves you and TAPS cares for you.

It feels strange sometimes to talk about hope and healing in the middle of also experiencing gut-wrenching pain. My question for Rebekah at the conclusion of her presentation was about how she and her husband found hope together after the loss of their child. Similar to my own story of hope and healing, along with many other stories shared with me by survivors, Rebekah described a winding and bumpy road. It is hard and it is purposeful. Life does not ever “go back to normal.” But life does go on. For all of us on this journey toward healing, I do know that life exists. Hope is real.

Karissa Kelley, the surviving sister of Airman 1st Class Caleb Kelely, is a licensed professional counselor and a certified thanatologist. At TAPS, she works closely with survivors as the family resource liaison.