TAPS Advisory Board member and internationally-recognized expert in grief and loss, Kenneth J. Doka, Ph.D., was recognized April 12 with the Lifetime Achievement Award from the Association for Death Education and Counseling. The award was presented at ADEC’s 41st annual conference, held in Atlanta.

Ken Doka, who serves on the TAPS advisory board, is a professor of gerontology at the College of New Rochelle Graduate School and has been a senior consultant to the Hospice Foundation of America for 26 years. 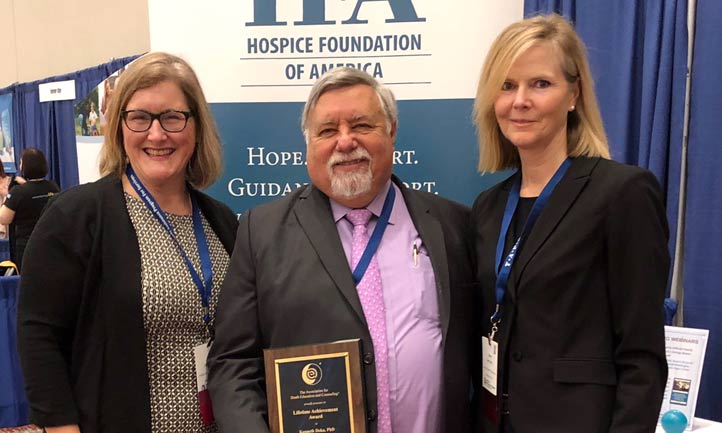 As part of an educational initiative, TAPS has teamed with the Hospice Foundation of America to create the TAPS Institute for Hope and Healing, a training and education hub for bereavement professionals, bereaved individuals and grieving military and civilian families. At the Institute, the two organizations provide workshops, seminars, panel discussions and more to train professionals and help individuals and families thrive after loss. Doka has facilitated, presented and moderated several popular webinars and in-person workshops. Coming up, he will present a two-day seminar for grief professionals, titled “Helping Families and Individuals Coping with Grief,” June 20-21, 2019 at the Institute in Arlington, Virginia. He will also be leading two workshops for survivors at TAPS National Military Survivor Seminar over Memorial Day Weekend.

Doka is a prolific author in the field of grief and loss and has written a number of  books, including "Spirituality and End-of-Life Care," "Grieving beyond Gender: Understanding the Ways Men and Woman Mourn," "Cancer and End-of-Life Care," "Living with Grief: Children and Adolescents," "Living with Grief: Before "Death, Dying and Bereavement," "Living with Grief: Coping with Public Tragedy," “Men Don’t Cry, Women Do," "Disenfranchised Grief: New Directions, Challenges, and Strategies for Practice." In addition to writing books, Doka has published more than 100 articles and book chapters and serves as editor of both "Omega: The Journal of Death and Dying" and "Journeys: A Newsletter to Help in Bereavement."

Reid, who has been a faculty member at Southeastern Oklahoma State University for more than 20 years, was honored with the ADEC 2019 Service Award. A long-time member of ADEC, Jon served as president of its board from 2013-2014. In his capacity as a national certified counselor and licensed professional counselor in Texas, Jon has been presenting workshops at TAPS National Military Survivor Seminar for many years.  He will be at TAPS National Military Survivor Seminar over Memorial Day Weekend.

Barrett, who serves as the executive director and co-founder of Tamarack Grief Resource Center in Montana, was presented with the Community Educator Award at the conference. Barrett specializes in outdoor-based programming, facilitator training and strength-oriented grief and trauma care. As a volunteer at national and regional seminars since 2007, Barrett has played an integral role in the development of TAPS programming. She helped launch the first Good Grief Campout, serves as a consultant and lead staff for outdoor-based youth programs, provides clinical support at the annual TAPS National Military Survivor Seminar and Good Grief Camp, and facilitates leadership seminars.