Thousands of volunteers will participate in National Wreaths Across America Day on Saturday, December 15, to place wreaths on veterans’ graves at more than a thousand cemeteries throughout the country, including at Arlington National Cemetery.

Gina Barnhurst started participating in Wreaths Across America in 2008, two years after her son, Marine Lance Cpl. Eric Herzberg, was killed in Iraq and buried at Arlington. The first time she volunteered, she brought snacks and coffee to share with the other parents and family members of those resting around her son's marker. 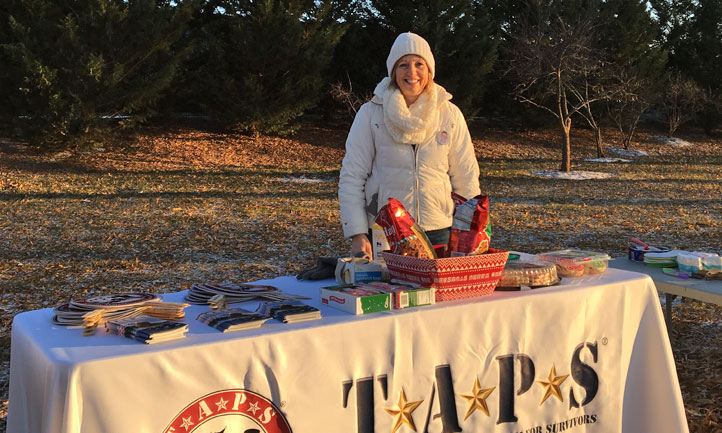 “Back then, we used to be able to drive to Section 60 on that day, so I started serving coffee out of the back of my car,” she said. “A few years later, I started bringing ornaments and art supplies for children to decorate trees and grave stones.”

Gina has made life-long friends with those she has met and gotten to know at the cemetery. “It’s like a reunion when we see each other on that day,” she said.

TAPS will have Peer Mentors in attendance to offer support to any surviving family and friends who are participating in the time-honored tradition of laying wreaths at Arlington. They will be standing by near York and Halsey Drives, near Section 60.

A schedule of the morning’s events are available on the Wreaths for America's website. Cemetery officials instruct visitors and volunteers to take the Metro to get to the cemetery. There is no public parking at the cemetery that day. There will be parking at the Pentagon’s South Parking lot and Pentagon City Mall; entry to the grounds will be through the South Cemetery Gate. For those parking at Pentagon North Parking, it is recommended you walk to the cemetery’s main entrance by using the Route 27 pedestrian walkway. 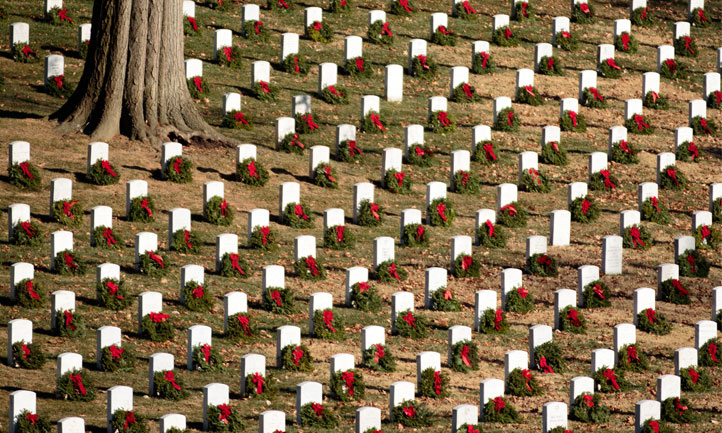 According to the Wreaths Across America’s website, the tradition of placing wreaths started in 1992 when Morrill Worcester, the owner of a Maine-based wreath company, had extra wreaths from that holiday season.

Worcester worked with his senator to arrange for the wreaths to be placed at Arlington National Cemetery. At first, the wreaths went to the graves in an older section of the cemetery that had fewer visitors with each passing year. As the years went on, the number of supporters, volunteers and donors for his project grew, and wreaths were placed throughout the cemetery. The project received national attention when a photo of the wreaths on the snow-covered ground at Arlington went viral. Today, thousands of volunteers lay wreaths at national and state cemeteries around the country.