What happened? Why did he do it?

The answers to the questions are complex. When someone we love dies by suicide, it can be overwhelming and confusing, and bring with it many emotions and questions. Those affected by suicide often struggle with how, and if, their life will ever fit back together again. More than anybody, it is the suicide loss survivor who is left with endless “whys” and “how could this happen?” While every circumstance is as unique as the loved one who has died, there can be many commonalities and factors that are often associated with deaths by suicide.

While this article cannot address exact scenarios or give precise answers as to why someone’s loved one died by suicide, acquiring an understanding around the concept of suicide can often shed light on the topic as being a complex phenomenon and a multi-factored event. Based on suicidology, the scientific study of suicide, some of the prominent theories, current research, and testimonials help to better explain the suicidal mindset and why people die by suicide. This understanding also helps in identifying some of the indicators, signs, and factors that often contribute to a person’s risk for suicide.

For those who have lost a loved one to suicide or for those at risk for suicide, it is important to note that talking about prevention efforts and details around suicide might elicit or evoke various feelings or responses that are unique to how each individual has processed their grief. It is common for survivors of loss to reflect or wonder why more wasn’t done to help their loved one. Some people may struggle with anger or blame at one’s self or towards others if these efforts were not offered to their loved ones.

There may be feelings of regret over how they didn’t know then what they have come to know now. It is important to note that learning new information about suicide does not mean you should hold yourself responsible for something you did, or did not do, in the past. While we may never get the exact answers we seek, understanding more around this subject matter can often help survivors of loss as they heal through the grieving process.

Dr. Edwin Shneidman, who is known as the father of suicidology, refers to the psychological commonalities of suicide in his book, The Suicidal Mind.  Shneidman called the psychological pain associated with suicide as “psychache,” which included intolerable emotion, unbearable pain, and unacceptable anguish, and where the common purpose of suicide was to seek a solution to a problem that generated intense suffering. He noted the common emotions of suicide as being hopelessness and helplessness, where the person at risk for suicide feels the situation is unsalvageable and seeks an escape from the suffering. Shneidman also proposed the mind of a suicidal person has a difficult time perceiving options, and mistakenly believes there are only two choices: either to continue suffering or to die.

Leading suicidologist Dr. Thomas Joiner proposes why some individuals may engage in suicidal behaviors as explained in his Interpersonal-Psychological Theory of Suicidal Behavior and in his book Why People Die by Suicide. Joiner states that for an individual to die by suicide, there must be two major components occurring at the same time. This first component is the desire to die (which includes the two elements of perceived burdensomeness, such as “I am a burden” and failure to belong, such as “I am alone.” The second component is the capacity or ability for self-harm or suicide—which includes a fearlessness of dying.

Otherwise stated, feelings of loneliness and being a burden to others, combined with the capacity for self-harm, converge to create a fatal combination necessary for suicide behavior or death to occur. 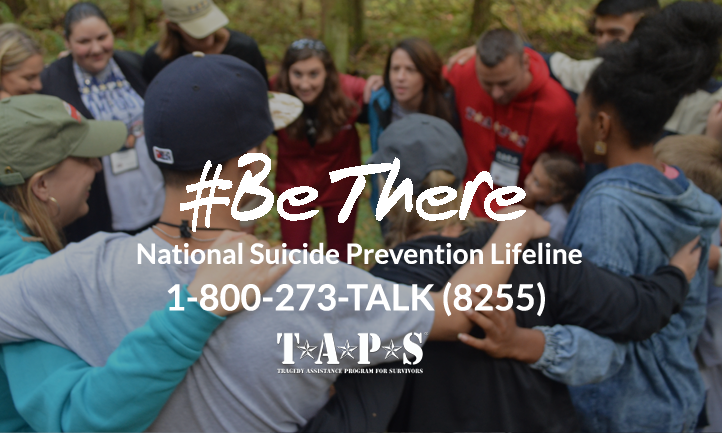 There are many myths surrounding the topic of suicide, so learning the facts can also lead to a deeper, more informed understanding. The following are some of the accurate details that may reframe the common misconceptions around suicide:

For suicide attempt survivors, their story becomes living proof that help does exist, and with it also comes the possibility of hope. A special, heartfelt thanks is offered to all those courageous people who have dedicated their lives, their stories, and the memories of their loves ones, in order to better understand the topic of suicide.

If you, or someone you know, may be at risk for suicide, please seek immediate help by: calling the National Suicide Prevention Lifeline at 800-273-8255 or 911, texting the Crisis Text Line at 741741, or go to the nearest emergency room.

This article was written by Carla Stumpf-Patton, Ed.D., TAPS Director of Suicide Postvention Programs and the Surviving Spouse of Sgt. Richard Stumpf, Jr., U.S. Marine Corps. Carla is a board-certified counselor who holds a doctorate in education counseling psychology and is a licensed mental health counselor. She is a certified Fellow in Thanatology and holds certification as a clinical trauma professional.