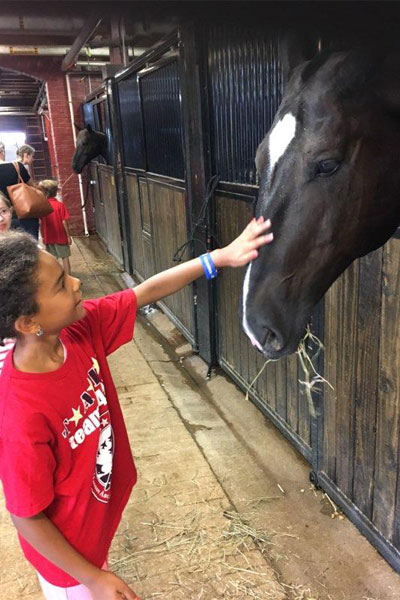 Seven-year-old Arianna Bryant has always had a love of horses. Her mother says she is crazy about horses “in a very good way.”

So when Arianna had a chance to meet Klinger, the horse in her favorite book “Klinger: A Story of Honor and Hope,” she was very excited.

“I like horses because most of them are nice and stand still when you brush them,” Arianna wrote in a letter to TAPS. “Horses help me by helping me get calm and if I am in a good mood they make me happier.”

Tonight, Arianna and her mother Anna Bryant will attend the Armed Forces Reception as part of the Washington International Horse Show’s 7th Annual Military Night presented by Caterpillar, Inc., in Washington, D.C. WIHS will honor and recognize military members, their families and supporters with a special evening program. As the official military charity for WIHS since 2010, TAPS will receive proceeds from the “Jump for TAPS.” Each time a rider clears the TAPS jumping fence, a donation is made to TAPS. WIHS has raised more than $96,000 for TAPS since 2010.

Arianna and Anna will join other surviving families, TAPS military mentors, volunteers and supporters at the Armed Forces Reception, supported by RBC Wealth Management. Arianna will also get to see her old friend Klinger, the horse, who is a special guest at the horse show every year. The Klinger Perpetual Award for Honor and Service, presented by EQUUS Foundation, is awarded during WIHS Military Night to recognize a horse, individual or organization that best shows the values of honor and service as embodied by Klinger. 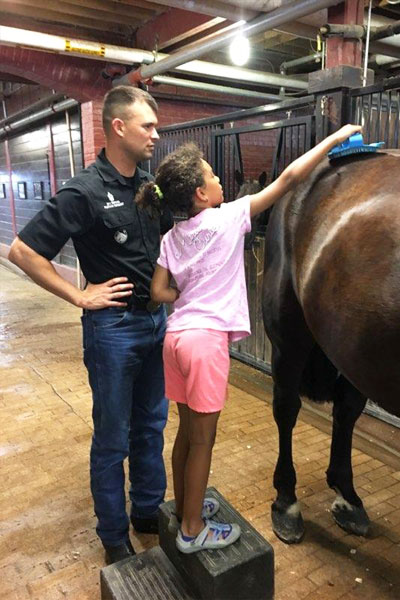 The Klinger award was created in 2013 to honor Klinger, a special horse who has touched the lives of many through his life of service with the 3rd U.S. Infantry Regiment (The Old Guard) Caisson Platoon at Fort Myer, Virginia. Klinger has served as the official escort to the President of the United States, and is a TAPS ambassador who brings comfort to many children who have lost loved ones in the military.

Arianna was an infant when her father, Maj. Vernon Bryant, died in 2012. She is one of many children who are drawn to the book “Klinger: A Story of Honor and Hope,” which is about a young horse who dreams of fame as a racehorse. When his life is disrupted, he finds a new dream and fulfillment in honoring fallen heroes and bringing comfort to children and their families.

As the WIHS celebrates its 60th anniversary, TAPS is proud to count the Washington International Horse Show and its supporters as one of our strongest partners in helping families of the fallen.