TAPS is once again partnering with the National Football League for the TAPS U.K. Experience. Surviving families from the United States and United Kingdom will get together for a series of events to strengthen international ties, honor loved ones who served in the American and British Armed Forces, and of course, catch some American football action.

“It’s an extraordinary experience to bring together American and British military families whose loved ones stood shoulder-to-shoulder when called upon to defend their freedoms,” said Bonnie Carroll, TAPS president and founder. 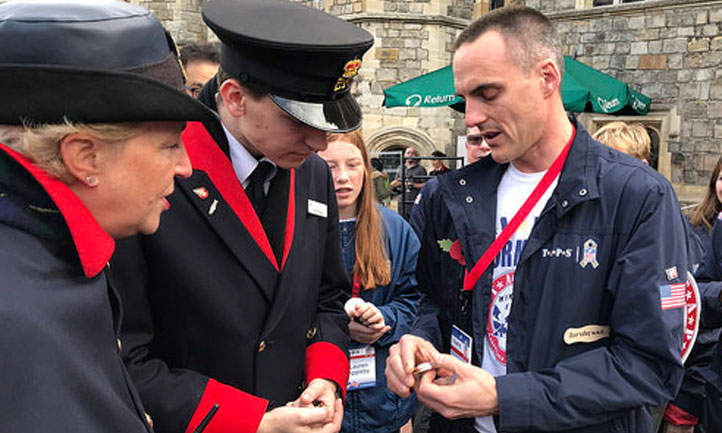 The families will visit and tour the American Embassy and Althorp Estate, the childhood home and final resting place of Princess Diana. They will meet with Super Bowl champs, the Philadelphia Eagles, and attend the team’s football practice. The TAPS U.K. Experience will culminate with a trip to Wembley Stadium to watch the Eagles face off with the Jacksonville Jaguars in one of three games being held in London this season.

“This weekend is a great opportunity to unite survivors on both sides of the Atlantic to honor their loved ones,” said Anna Isaacson, NFL senior vice president of social responsibility. “The NFL is proud to support TAPS as they continue their incredible work in the United States and extend support to families abroad.”

As part of the trip, TAPS Military Mentors from both the U.S. and British Armed Forces will support TAPS families and children from Scotty’s Little Soldiers, a U.K. organization that cares for children who have lost a military parent.

In addition, TAPS Legacy Mentors will travel to London to meet with young adult recipients of The Diana Award who are similarly committed to giving back to their communities through service and mentorship. Legacy Mentors are military children who have received mentorship through TAPS and are now mentoring newly bereaved younger children.

TAPS Military Mentors and Legacy Mentors will share the TAPS model of mentoring with U.K. counterparts at Scotty’ Little Soldiers and The Diana Award.

The partnership between the NFL and TAPS offers families the opportunity to come together around football, extend their network of support and move forward on their grief journeys. Participating American TAPS families include surviving children and spouses who have a special connection to the United Kingdom, or to the Eagles or Jaguars. These families will have the chance to share their stories with British surviving family members and create new memories as they work through their grief and honor their loved ones together.

“This international event will bring together those who have sacrificed so much for our freedom,” said Bonnie Carroll. “It will empower young people to effect positive change in our world.”