This weekend, TAPS will welcome surviving parents, spouses, children, siblings, and others grieving the death of a military loved one to its 10th annual TAPS National Military Suicide Survivor Seminar and Good Grief Camp on October 5 - 8, 2018. Taking place in the Tampa area at the Innisbrook Resort in Palm Harbor, Flordia, the event will focus on providing support and resources to surviving families as they find hope connecting with fellow suicide loss survivors and sharing their personal stories of loss.

“The grief that follows a suicide loss is uniquely complicated, and it’s important for those who have lost a military loved one to suicide to connect with others who are experiencing a similar journey,” said Kim Ruocco, Vice President of Suicide Prevention and Postvention at TAPS. “Families need to know they are not alone. They will come from across the country to join us to learn more about how to cope with their loss, honor their loved one and find hope and healing together.” 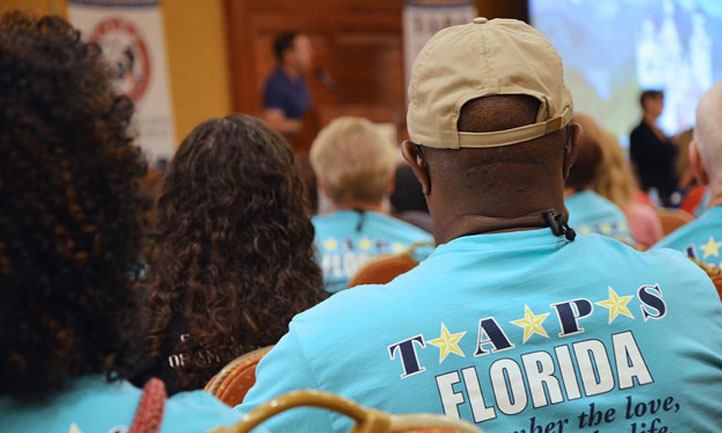 This year’s seminar marks the 10th anniversary of the event, which highlights a groundbreaking program that came into existence as a result of increased suicide rates in the military and veteran population that began a decade ago. TAPS has led the way developing a number of best practices on suicide prevention and postvention which it proactively shares with organizations inside the military and veteran community and beyond in the civilian world.

For those attending this year’s seminar, adults can choose from a myriad of sessions on everything from telling your story to family dynamics after loss. Additionally, TAPS will welcome Kevin Hines for a TED-style talk on Saturday night. Kevin’s story as a suicide attempt survivor is sure to provide insight and a inspiration for all who attend. On Sunday morning, we will host a panel discussion featuring faith leaders from six different religious traditions for an open and compassionate conversation. We will explore messages about suicide that we grew up with or are hearing in faith communities. The panel will explore questions such as:

Kim Burditt is the Programs and Logistics Manager of TAPS Suicide Postvention. She is also the surviving sister of Marine Corps veteran Jon Hoffman, who died by suicide in 2010. Kim helps create programming, trainings and events for suicide loss survivors and those who care for them. Kim is currently in Salem State University’s master of social work program.