This week we continue to share God winks from survivors. The picture this week comes from an article, Godwinks: Special Gifts from Our Loved Ones, written by Bevin Landrum. This picture is of a light that a survivor’s husband said he was going to fix, but never got around to. After his death, his wife was carrying some of his personal belongings upstairs and all of a sudden...it lit! 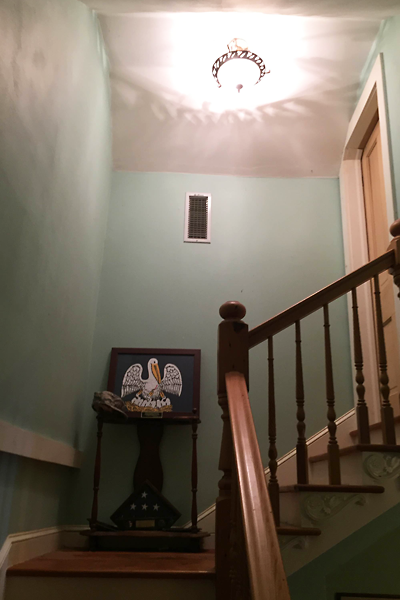 Today, I wanted to include a God wink that I had recently. My husband and I were watching a football game on TV and one of the players came right up to the camera. He was wearing a jersey with a huge number 76 on it. Later I noticed one of the referees had the number 76 on the back of his shirt. That was my son, Bryon’s number when he played football in high school. He loved football and that is the reason I watch now. God winks are all around us and they come when we least expect it. Enjoy this week’s message.

On one of the Tuesday online chats for all survivors, a question came up which we all thought would be a good one for the Saturday Morning Message and would help some of our newer survivors. We talked about celebrating our loved one’s birthday as a positive way to remember their lives, so the question this week is: What do you do to celebrate your loved one’s birthday?

I thought I’m Already There (Message from Home) sung by Lonestar would be a good song for this week’s message about God winks. I chose this one because at the beginning of the video, it shows a double rotor helicopter flying over. My son worked on the crew of those and I took it as another God wink.

Responses from Survivors to last week’s question: Have you had a God wink that you would like to share with our group?

From Essie, mother of Tysheena: The entire month of August especially, my husband’s birthday, was a God wink. I almost lost my husband in April and I believe I told you of the dream his doctor had about Tysheena. She was sitting in the very chair I was sitting in watching over her daddy after the doctor asked about the tattoo on his arm.

At his birthday party cookout, I felt her presence all around there. Everyone that was supposed to come came and he was so elated. This was his 60th birthday.

Finally, I have a cousin whose job is to make the casings that our loved one’s military flags go into. He made one for Tysheena's flag from her casket and it really stamped a God wink on my heart. Her picture is on it and her dates, it's beautiful.  She is everywhere in our apartment and lives with us every day of our lives.

From Samantha, fiancé of Preston: Preston would buy chocolate bars in bulk. Whenever I was having a bad day or in a funk, he would throw me a chocolate bar. He was romantic, but also very funny. He wouldn’t hand them to me with a love note. Normally, he just threw them at me and said nothing. He had them hidden in our apartment, so that I couldn’t just eat them all. I was really craving one, but he said that they were only for bad days, so I went on a hunt to find them. Of course, I couldn’t. And as months went by, he used them all.

I had just gotten back from the funeral and burial services and I needed to clean out the apartment. It was a horrible day, having to put all of his life in boxes. So, I was grabbing things off the top shelf in our closet. All of a sudden, a chocolate bar just fell down and literally smacked me in the face. I burst out laughing, because I knew that was him. And then I was crying. But that’s grief, right? I keep that chocolate bar in a box in my room. I’m not sure if it’ll go bad or if I’ll ever eat it, but it is a reminder that on my worst days, he’s always with me.

From Cheryl, mother of Jack:

A Letter from Heaven.

My son Jack was killed Sept. 29, 2009. On April 3, 2012, my daughter Abi, who was out of town, called me. She said a family that she knew through church had called her. Earlier that day the guy had been in his garage and looked up in the transom and he could see a paper. He pulled on it. It was a letter. They had a mail slot in their garage door. The letter must have gotten stuck and when they lifted the door it must have been caught above. They have the same house number, two blocks over. The letter was sorted and delivered to the wrong house. They saw it was addressed to us. It was written in 2003, when my son was at Fort Hood. They knew Abi and contacted her. Since she was out of town, they brought the letter over. This letter we opened sounded so much like we were meant to receive it when we got it. Jack talked about his situation at the time, but we felt we could compare it to him being in Heaven!

He told how that he was all settled in and that he missed us but he was enjoying himself. He told us we were the best family. It was so amazing to us that we called everyone, we talked to everyone saying we got a letter from Jack. God had all those things happen for us!

If you’re looking to connect with other surviving women, you may just find your sisterhood during our fall weekly Women’s Empowerment sessions! These sessions are open to all TAPS women wrestling with questions of identity and purpose after loss. You can join this safe, supportive online environment via webcam. Our weekly schedule offers sessions on Tuesday through Friday each week.

Accessing a spirit of holiday cheer in the midst of grief can be challenging and many may feel compelled to skip the holidays altogether. Especially this year, when so many gatherings and travel may be limited, cultivating holiday traditions that honor your grief and promote connection with others can be very healing. Join the TAPS Institute to discuss creative ways to engage in the holidays in ways that meet you where you are in your grief journey. This Creating New Holiday Traditions webinar is free and will be held Thursday, November 19 from 12:00 to- 1:00 p.m. Eastern.