There were so many interesting God winks sent this week that I think it will take two weeks to share these marvelous moments in our lives. If you have a God wink you would like to share after reading this week’s message, feel free to send it along. I will include it in the monthly Writers’ Circle that is sent to those who request it. 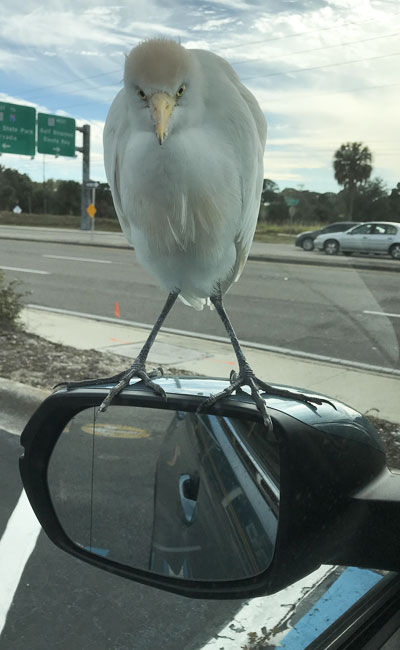 The picture this week comes from Debra, wife of Thomas. It goes with her God wink. Debra wrote, “Tom is a great one for making his presence known from time to time by the means of God winks. He leaves me pennies in some very odd places. I swear that Tom will try to get my attention by other means also. This stink eye bird one afternoon had me laughing. I had taken Gus, my dog, to lunch at Wendy’s and was cheating on my diet. (Tom would oftentimes raise his eyebrow and teasingly give me the stink eye when I was trying to diet, but gave into the call of the French fry.) I had parked the car under a tree to watch the squirrels (Tom loved his squirrels) and no sooner had I turned off the car engine than a bird landed on the driver’s side mirror and just sat there staring at me. The bird didn’t want any food, it just sat there looking at the two of us in the car the entire time. Gus, who usually will bark at birds, just sat very quietly and watched our strange lunch visitor. The bird didn’t leave until I was about ready to leave. God winks make me smile and I know that Tom is still around watching over us.”

Next week will be a continuation of the God winks that have been sent. Would you like to share a question or read how other survivors respond to a topic or question you have? I would love to gather some thoughts for future Saturday Morning Messages. It can be helpful to read and hear how others cope. Send them to me at online@taps.org. Thank you to everyone responding this week and those who read this message.

The song this week comes from Barbara, mother of David: My son Robert is getting married in two weeks. His older brother, David, who died in 2012, will be incredibly missed. Robert is setting up a memorial table at the reception hall. The wink I received happened at mass last weekend. The song On Eagles' Wings was played at communion and I instinctively knew it was David telling me that everything would be OK and he will be present at his brother's wedding. The song has a lot of meaning to us as it was sung at David's funeral.

Responses from Survivors to last week’s question: Have you had a God wink that you would like to share with our group?

From Leslie, mother of Eugene: Last Monday I had the funeral for my dad, a WWII Naval Veteran. This was a military cemetery in the far eastern part of Long Island. The first part of the service is the military, then the religious part. When my daughter from another mother, JoAnna, got up to speak, car alarms went off. She dated my son, Gene, for more than 13 years. All of us got out our keys and started clicking to no avail. Finally, she stopped talking and yelled, “Gene, enough already.” The cars went silent and she continued with her speech. My dad and my son are buried in the same section. They were very close and JoAnna was close to both.

From Samira, mother of Andres: One day I was at the cemetery crying and lying down at the side of the tomb, broke and wanting to die at that moment, but a butterfly landed in front of me and I stopped crying. I came back and stopped. I felt his presence. I think my Son Andres said, “I am with you Mom.”

From Ginny, wife of John: My God wink happened this week. I’m in a political science class with approximately 25 other people. We have a big research project on a country due in November. We drew our assigned country randomly from a vase. I stopped in my tracks as I saw my country. It was South Korea. My husband was a Korean linguist and an expert on the Korean Peninsula. Needless to say I couldn’t focus on the rest of the class!

From Kelsey, mother of Michael: My God wink happened shortly after Michael passed. He passed away in August 2016. My birthday is in July. That year for my birthday he bought a plane ticket for me to visit friends in Detroit, in September. So one month after he was gone I went on the trip. I overslept my first night there and he came into the room saying 'Momma-san, are you going to get up'? It was so real that I instantly awoke.

From Bonnie Jo, mother of Andrew: I was sitting there on the patio and all of a sudden a butterfly came up and landed on my eyeglasses. How he knew to land on my right eye is beyond me as my left eye is an artificial one. I sat there frozen until he flew away. I could not think about it that time as I had to get ready for the funeral.