The topic this week came from reading the article in the latest TAPS Magazine and on the TAPS blog about five books written by survivors. This got me thinking about writing a book to honor our loved ones and that became the subject for this week’s message. Some of the contributions are about books that have already been written or how the love of books was shared, while others write about books they would publish. 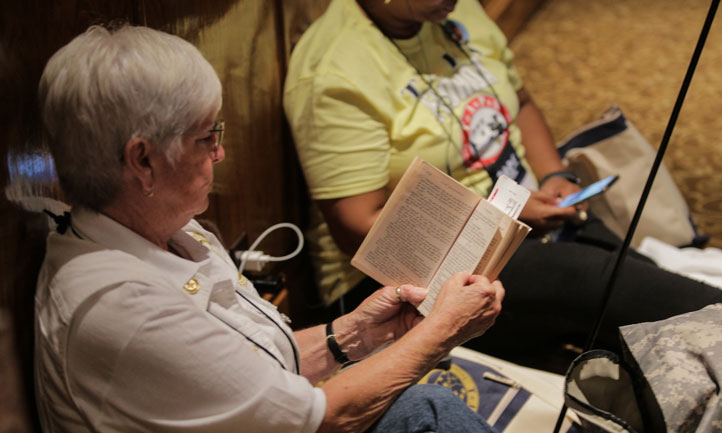 My book about Bryon would be a biography titled “Reaching for the Sky.” Ever since he was a small child, he worked to be the best he could be both academically and in sports where he played football, ice hockey, and baseball. Then one time my nephew came to visit who was at that time a Navy SEAL. Bryon was captivated, so it didn’t surprise me when he joined the Marines and signed up to be a helicopter crew chief. He had just come from four years on the presidential helicopter squad and began to get settled in at Camp Lejeune when he died in a training accident. I still visualize him whenever a helicopter flies over the house.

The question this week comes from Lalaine, daughter of Francisco. She writes, “Some nights we remember our dreams so vividly it's like watching a TV show or a movie. Sometimes we remember only a feeling or a hint of a dream, as it slips away when we wake and go about our day. Let’s share a dream we have had about our loved ones, so the question this week is: Has a loved one come to you in a dream? How did it make you feel? What was remarkable about it?” We look forward to your responses.

We can honor our loved ones by communicating with each other through writing. You never know how your words may touch the heart of another. I encourage you to reply to the Saturday Morning Message by emailing online@taps.org. In order to have your reply included in the week’s Saturday Morning Message, it is best to send it to me by Tuesday morning of the following week. Thank you to everyone responding this week and those who read this message.

From Debby, wife of Thomas: The other evening during one of the many TAPS online chats, I was following along with the conversation and for some unknown reason the Beatles’ song Help! just came flashing into my mind. I am a survivor and a Peer Mentor and it hadn’t occurred to me before just how much those lyrics from one simple little song really encompasses so many of the feelings which we all have experienced and what we have gained from TAPS. Our lives have changed in “Oh so many ways,” along with our self-assurance and independence. They seem at times to have really vanished into a haze or “grief fog.”  We look to our new TAPS family for help when we are feeling down or are just in need of grounding.

As a Peer Mentor, the song reminded me exactly of what that role is and what we try to do for another person. We are there to help someone else journey along with us and help navigate down this rocky road called grief. We try our best to help when someone is feeling down by listening to them and try to help get their feet back on the ground again. Many times, a new mentee chooses not to closely work with their mentor, but knowing that someone is there for them and is around is appreciated. For a number of us, we have become a friend and not the person’s actual assigned mentor, because of a chance encounter that maybe we once had at a TAPS retreat or seminar. TAPS and its many resources 24/7, 365 days a year is a true help when it’s needed by all of us, no matter if it’s been a month or 24 years of grief. They get it.

Responses from Survivors to last week’s question: If you were to write a book honoring your loved one's life, what would be the title and why?

From Janet, mother of Joseph: I have wanted to publish a child's book my son, Joseph, wrote and illustrated in the second or third grade. The title is “The Dog Who's Afraid of Bones.” I am so glad I have saved this treasured book. I read it when I need to feel that connection with him as a child. It brings me comfort and smiles.

From Beth, spouse of Thomas: My spouse, Thomas, had a bipolar disorder. Tom was never happier than when he was helping others. He became an American Red Cross and an American Heart Association instructor, honored in 2013 as the County Instructor of the Year by the local American Red Cross. He successfully ran his own CPR and first aid company to train nurses, teachers, and others in CPR and first aid. He served on the board of his homeowner’s association for over 10 years, helping neighbors with lockouts, fire, and security issues. He became a locksmith and was working in the security field at the time of his death. He was a staff sergeant in the Marine reserves and an aircraft mechanic

From Bonnie Jo, mother of Andrew: I have written and published a book entitled “Marla-boro,” after my favorite brand of cigarettes. It was never intended to be a book about my son, but I had not finished it before he was killed. I did include so much of him and my family as they endured all my years of addiction to cigarettes and my many attempts to quit. I remember when Andy left for his first tour in Afghanistan. He had given up his own smoking habit and studied so much as he was a medic. He gave me a green rubber band and said to me, “Mom, put this on and every time you desire a cigarette, just think of me. Pluck it and you will be fine!” It did work until life took its own turn.

When Andy was killed in action, I had quit smoking again and was doing quite well and wondering how to end my story. In the end, I did include lots about those devastating times when he was killed. Well, sad to say that I just could not handle his death, so I began to smoke again. Now, I am six plus years smoke-free and how I did it is another story.

From Merry, mother of Wesley: Oddly enough, the very first thing that popped into my head is this: Wes and I would read a story together and then I would ask him, "How would YOU end that story? Would you write anything different?" Those brief interactions were so precious to me and he would have the most interesting answers. Unfortunately, his personal story did not end well and I am sad to think that he would fashion his story the way it went. He was such a giving, sensitive, funny, smart person. Our everyday lives are at a loss since he is gone.

From Leslie, mother of Eugene: I would have a factionalized book written where my son is the main character. This would be a romantic fantasy where the FBI and NSA were involved. This would be a wild and crazy story including great adventures all over the world! It would probably be such an amazing story that a series would be made.

From Samira, mother of Andres: Andres was a great kid and a great man. He loved computers and games and was proactive in his responsibilities. At the base in Japan, he helped them make zero errors when entering the information in the computer. Before they had 10 percent errors. The title of the book I would write would be, “How to Become a Kind, Responsible, and Funny Man Besides Being a Gamer Dreamy Techy.” He was so smart. I miss him every day.

From Tabitha, wife of Michael: This is an interesting question as I am planning to write a book about my husband once I retire. I have already started a bit of it. It is truthful in nature with a tiny bit of artistic reflection. I just want people, especially his children, to know and/or remember him. No one talks about my husband anymore and I seem to have become the unofficial memory keeper. A book will be the best way to ensure his children remember him. It's a way of keeping him alive. I have decided to call it “Memoirs of My Soulmate.” It's a bit hippie, but then so we were a bit. I do believe that he is the key person for me and he has taught me so much in life and even more with his death. I cannot let that go, so I will forever memorialize him in a book.

If you would like to send a message thanking the participant in this week’s Saturday Morning Message, send it to me at online@taps.org and I will make sure your thoughts are passed along.