Some of the responses to the question about a comforting item included flag cases and who gave them to the family, so I thought it would be interesting to open this week’s message with the picture of the flag display sent by Winona, wife of Clifford, and the reply sent by Rebecca, mother of Nicholas, which is, “I keep my son's flag on a shelf that I had made for it. It has all my TAPS things on it, too. I have a Smurf collection on it as well. Since I am short, Nicholas always called me 'a Smurf.' The shelf is in my room.” 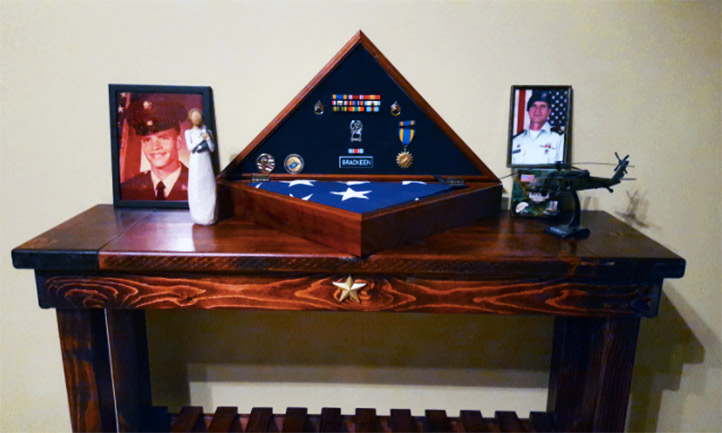 Thank you so much for all who contributed to this message and also those who read it.

I asked my friend Andy, father of Daniel, who facilitates a TAPS Care Group, to send me some questions that come up in his group. This is one of them and is this week’s question: When you are keenly feeling your loss, what is your "go to" thought to lift your spirits? You could also write about a place you go when you are feeling down. Feel free to send pictures. We look forward to your responses.

Debra, wife of Thomas: We both were fans of Willie Nelson, and we had one of our best date nights when he took me as a surprise to see Willie playing a live concert. Tom, unfortunately, never lived to hear the song “True Love” sung by Willie Nelson, but to me it reminds me of Tom whenever I play it.”

Question: What item have you received that you found useful or comforting following the death of your loved one?

From Travis, husband of Connie: The first isn't so much an item as it is an attitude that brought comfort. When I was doing the funeral planning with the funeral home, we were putting together the budget, and they asked about the reception. My church told me I could have the reception there and the funeral planner asked how much the charge was. I told her they weren't charging me. She asked me to double check, so I did. Our administrative pastor said, "This is our home, and you don't charge family rent to bring guests home."

The actual item that brought comfort was a display case for Connie's flag made in the wood hobby shop. Connie was at Fort Carson, and there were a few special forces troops there. Connie talked to them and fed them. There was one sergeant who was having a tough time. Connie and I both talked to him. He was returned to duty. About six months after Connie died he showed up at my door, apologized for not making it to the funeral because he was deployed when Connie died. Then he asked me if I had a display case for Connie's flag, which I hadn't gotten yet. When I said "no," he handed me one, and told me he had made it for her flag.

From Leslie, mother of Eugene: What was very comforting was a DVD about my son from his toddler days until he passed. Believe it or not, the DVD was made by my ex’s adult kids. They put together photos and music. I still treasure it.

From Cheryl, mother of Jack: After Jack died, I was just plain numb, hardly anything anyone said or did soaked in. It was like I was in a bubble. I was given things and tucked them away. It was about two months after the funeral that I was so desolate and knew I needed to get help. I went digging for my TAPS brochure I had been given. I tell people over and over, I believe it was literally my lifeline. I am saying it again. The most important thing for me was being given information to reach TAPS.

From Samira, mother of Andres: For me, everything is useful and special. My son, Andres', pillow is my connection with him. I sleep with it.

From Essie, mother of Tysheena: I lost my daughter on June 2, 2016, in Fort Hood, Texas, on a training mission at a low-water crossing. Sheena meant the world to my husband and me. She is one of seven children that we share together in a blended family. I received, last year around September or early October, Tysheena's wallet that she had on her person when the accident happened. I was wondering if they had found it, and I was called one afternoon and was told there was another item for me to retrieve. When I saw  it of course I broke down. It contained her military permit for truck driving, her SS card, and her New Jersey driver's license, among other things that she kept in her wallet. It was comforting and also helpful just to continue the process of grieving my daughter. Nothing can bring her back but having the things that she had on her at the time of her untimely departure helps me a lot. I just wanted to share this bit of information with my extended family. Love you all.