The replies from survivors to this week’s question all centered around the people who reached out to them not only in the early days, but who continued on past the memorials. It was the same for me. I value those in my community who talk about their memories of Bryon and I try to let them know how much that means. This week’s lead picture shows a staff member and a survivor at a TAPS seminar talking. One of the things I like about going to a seminar is doing just that as we share memories of our loved ones. The question for the upcoming week will let us do just that. I look forward to the responses that will be published next week. 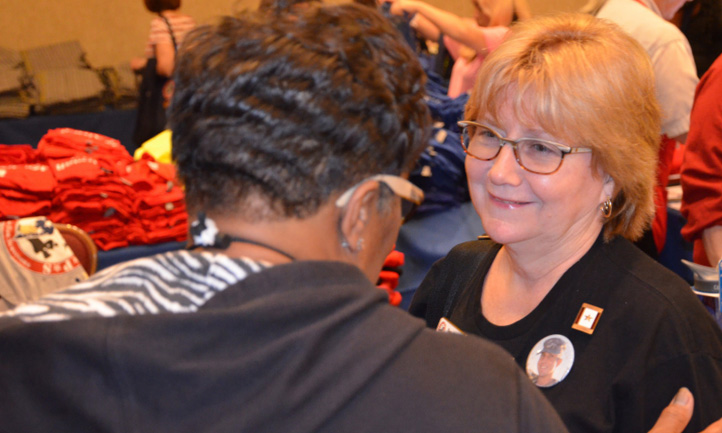 We can honor our loved ones by communicating with each other through writing. You never know how your words may touch the heart of another. You can also submit favorite songs that are meaningful to you. I encourage you to reply to the Saturday Morning Message by emailing online@taps.org. I directly receive all responses that are sent to this address. In order to have your reply included in the week’s Saturday Morning Message, it is best to send it to me by Tuesday morning of the following week. Thank you to everyone responding this week and those who read this message.

Bonnie Jo, mother of Andrew, sent this question: Why did your loved one join the military? I thought it would be a good question to introduce a part of our loved ones to each other. We look forward to your responses.

Leslie, mother of Eugene, sent this week’s song which is So Far Away sung by Carole King. Leslie wrote, “Just sitting here thinking of my son, Eugene, after one of his friends posted he just turned 40. The photo was of all Gene’s buddies from high school. And I thought of this song. Did I see a space in that photo or just wish he was standing there?”

Responses from Survivors to last week’s question: What was or were the kindest things said or done for you that pierced your grief fog early in your loss?

From Laura and Lyle, parents of Steven: As soon as we were notified by the Navy CACO that Steven was 'missing at sea' in the South China Sea and the search was underway, we planned a flight to Japan to be with our daughter-in-law and two toddler grandsons. The evening before we left, they called off the search and deemed Steven deceased. About a week after we arrived in Japan, members of our daughter-in-law’s family arrived as well. We were all tired, crowded, sad, stressed and feeling stuck together on the base as we awaited and somewhat dreaded the upcoming ship’s memorial service before all of us would return to the states. A chaplain and his wife took my husband and me for the day. They counseled us in the two-hour car ride to our destination with 'facts' to cling to and how to find hope in desperation and hope for us for the future, as Steven was our only child. They took us shopping, took us to eat, and on the two-hour car ride back, told us about how they would be our friends for life (and they are). They prayed with us, cried with us, and laughed with us. We felt renewed and looked forward to the memorial the ship would have to honor Steven.

We often grab our 'facts to cling to' for comfort and have found a new hope for the future through our daughter-in-law and toddler grandsons. The couple continues to call us and check on us often. We are blessed by them. It has been 10 months since Steven was missing at sea, we miss him terribly and we are very grateful for tangible words of wisdom given to us early in our loss.

From Essie, mother of Tysheena: My family and my childhood family rallied around me. Everyone assisted in any way they could without thought or question. My best friend came and cried with me for hours and my other best friend came and prayed with me. My in-laws drove from Maryland straight to me without thought. Mostly, my husband is the best — always by my side 10,000 percent.

From Sandra, mother of Joshua: After hearing that my oldest son Josh had passed away, my nephew Jacob was my "first responder." Jacob contacted me and came over. We were on our way to pick up some burgers at Whataburger when the two Casualty Assistance Officers knocked on my door. My youngest son answered the door. We already knew that Josh had died in the military hospital in Norfolk, Virginia. The CAOs stayed with me for hours, asking me how I was feeling, asking me about Josh and his girls, and making sure that I was all right. One CAO would be a constant in my life for the next few weeks. He checked on me every day, came over, and helped me fill out the tons of paperwork.

There was such an outpouring of love. Friends and family surrounded my husband and me at the wake, the funeral, and the luncheon. They were our support. There were so many beautiful things said to me about my son Joshua and it made me feel so proud, although I was so sad. So very sad. The grief was physically and mentally devastating. I could not have gotten through it without my family and friends.

From Kellye, wife of Thomas: The first words I heard from TAPS were, “Welcome to the TAPS family. You’re not alone. We’ve got you.” They then went on to explain that everyone at TAPS was a survivor and knew the horrific pain and sadness I was going through. I cannot even explain the sudden relief I felt. To know that I was safe.

Right after my husband died, I seriously didn’t know which way was up. I felt like I had gotten thrown under a massive waterfall and couldn’t come up for air. TAPS was my ‘air’ for my early days. They called several times a day, just to help me breathe. I cannot even say thank you for my Peer Mentor Sara’s and everyone else’s kindness. They were able to calm me down and shine a light onto my path. I seriously don’t have the words to express my thank you to TAPS. Thank you, Bonnie, for saving my life.

From Leslie, mother of Eugene: From the moment I received the call no one ever wants, all I thought about was my loss. My son was gone and as far as I was concerned I was the only one in pain. I couldn’t look at the wall in my apartment, because all I saw was my son. I moved. Then someone told me to look around and think about who else was in pain, like my dad and my surviving son. It was hard to believe anyone else could hurt as much as I was hurting, but they were. I had to not only help them but acknowledge their pain and their right to be in pain. Then I didn't feel so alone.

This Summer, Youth Programs is hosting TAPS Good Grief and Family Camp at Home through August 28. Each week, there are activities and challenges you can complete individually and as a family. Missed a week? No problem - all activities and challenges from previous weeks are available online. Join us for opportunities for you and the kids to connect to mentors and other families through Zoom sessions.

Make plans to join us for our next Virtual Military Survivor Seminar, August 21 and 22. We have new, dynamic sessions available throughout the weekend at no cost, with all of the resources, care and love we can offer, coming to you in the comfort of your home. We'll also have Share Groups, our facilitated support groups, where you can meet other survivors with similar loss experience. We look forward to seeing you online soon!

Save the date! Please join us for the Military Survivor New to Grief Seminar, once per week from September 3 to 24. Together we will work toward two primary goals. First, we will grow deeper understandings as we deconstruct myths about grief, explore the cognitive and physical impacts of grief, and seek to establish a helpful language around our own experiences. Second, we will establish community among our peers so that we have others who have a strong desire to accompany us as we continue navigating the ups and downs of our loss and grief.

If your military loved one suffered with a wound, illness, or injury, please consider taking our new Illness Loss Survivor Survey before August 18th, 2020, so TAPS can honor your loved one through our advocacy efforts. If you took the survey last year, we ask that you retake it as we've made important updates. Your response could help shape policy and legislation, and direct future TAPS programs and services. To learn more, email illnessloss@taps.org.

Have you lost your job, or have reduced work hours? Or are otherwise affected by COVID-19? If you are grieving the death of a loved one, and their life included military service, we'd like to hear from you. Your feedback will be used to improve TAPS programs and to communicate survivor needs to donors and stakeholders. Tell us more.