Pictures bring back memories of what we did with our loved ones and what they loved doing. This picture I carry in my cell phone wherever I go and I wanted to share it with you. It brings back the memory of how much Bryon loved his job in the Marines. He was a helicopter crew chief. One of his friends took the picture on one of the flights. I love the picture because it shows his big smile and makes me smile as well. You will read and see pictures others sent this week later in the message. 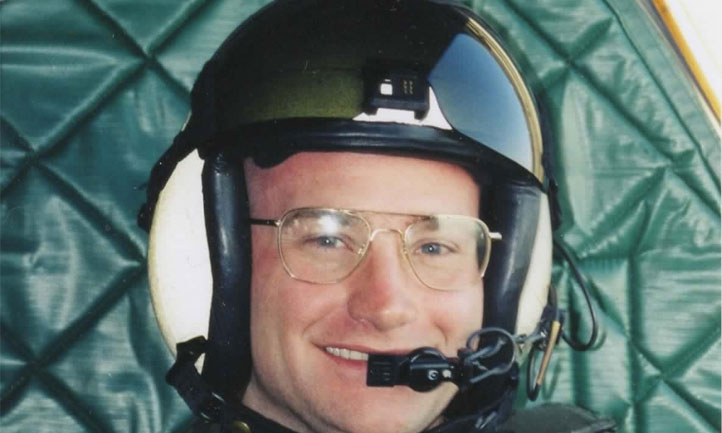 The Saturday Morning Message will be posted as usual to those who signed up to receive it. The responses may also be used in other TAPS publications.Remember that you can write to me anytime just to communicate or if you have thoughts on what could make the Saturday Morning Message more helpful. I look forward to hearing from you. My email address is online@taps.org.

The next question comes from Cheryl, mother of Jack who asks: Have you watched movies that helped with your grief or inspired an aspect of healing in your grief? Would you share a name of a movie and how it helped you? The movie doesn’t have to be one you saw at a cinema. It can be one you watched on TV or streamed through another device. The answers to this question will be posted in the July 28 Saturday Morning Message.

We can honor our loved ones by communicating with each other through writing. You never know how your words may touch the heart of another. You can also submit favorite songs that are meaningful to you. I encourage you to reply to the Saturday Morning Message by emailing online@taps.org. I directly receive all responses that are sent to this address. Thank you to everyone responding this week and those who read this message.

I know we had this song before, but I couldn’t resist sharing it again. I was watching the 4th of July concert in DC on PBS. Renee Fleming came onstage to perform You’ll Never Walk Alone. As the service members and their families went onstage, tears came to my eyes. Then I thought that is exactly what TAPS does for us...make sure that we never walk alone.

Responses from Survivors to last week’s question: Do you have photos of your loved one that bring back important memories for you? 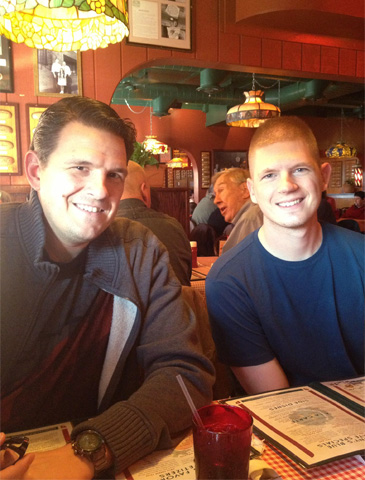 From Michelle, mother of Stephen: There are so many pictures I could post of memories that I have of my son, but then there wouldn't be anymore room for other proud parents to post their love ones’ pictures, so I decided to post one from when he came home in 2013 that really sticks in my head like it happened yesterday. Stephen had come home on leave, it was around 9:30 in the evening. I still remember opening the door, thinking it was my middle son’s girlfriend. When I opened that door, well, you know when you see videos of soldiers coming home surprising their loved ones and they are shouting, jumping up and down, just so excited. Well, that was my moment. Opening that front door, seeing him standing there with this big smile on his face and me going crazy! It was a moment I will forever cherish in my heart. So this picture is of my middle son, Daniel. The one to the right is my son, Stephen, when Stephen came home that March. They went to a restaurant he liked in Toledo, Ohio. My handsome soldier. 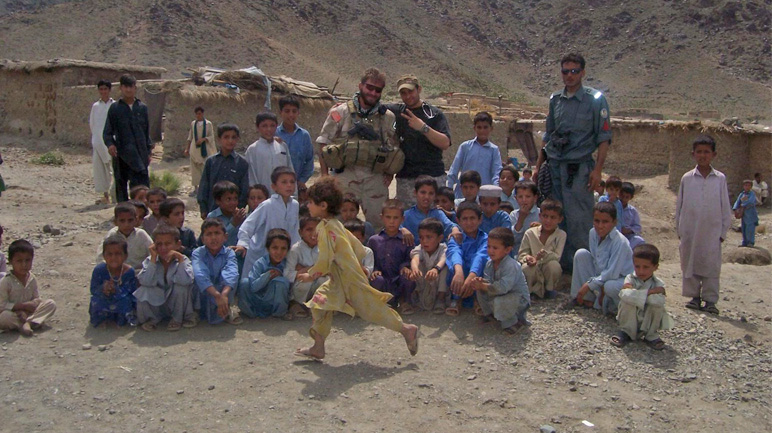 From Bonnie Jo, mother of Andrew and widow of Bob: Every photo I have of my Andy brings back so many wonderful memories and he was quite a ham, so he was always up for photos— except when he was a teenager! This is my favorite. It is of Andy with his KIDS as he called them on his first tour in Afghanistan. He laughed as he said, “These kids are having such a great time, but little do they know that in a while I will be giving them their shots!” 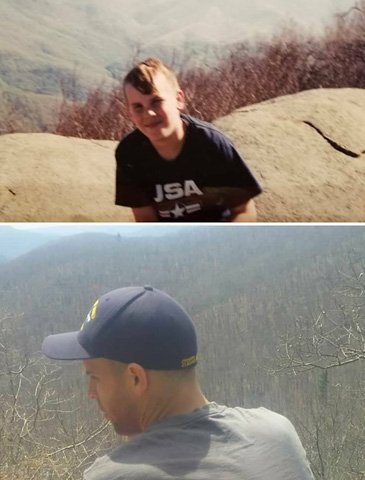 From Bruce, father of Brian: Brian, our son, was an active person never wanting to sit around. Whether it was going to baseball games, fishing, camping, hiking, concerts, or a game of golf. The hiking picture is him as a boy and a man six months before Brian’s death sitting in the same spot. 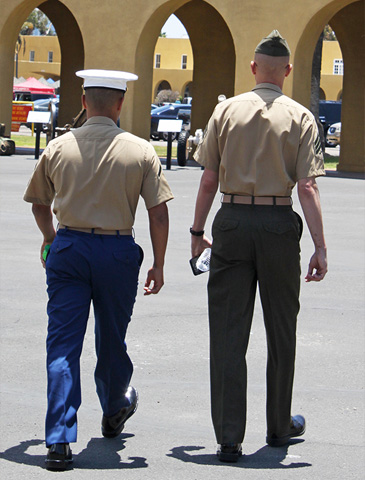 From Betty, mother of Michael: Despite the fact that it does not reveal the handsome smiles of my boys, this is one of my favorite photos. It was taken at Marine Recruit Depot in San Diego, June 5, 2015 following the graduation ceremony of my youngest son, Matthew. Ironically it was 10 years to the day that Michael left for boot camp in this same location. Michael, now a sergeant, was very proud of his brother. I snapped this photo as they strolled, in perfect step, across the beautiful art deco depot courtyard. It is hard to say who was the most proud that day: Michael, Matthew or me, the proud Marine mom. This picture hangs in our home as a precious reminder of a great day and our two great Marines—bound forever in love of country, love of family and love of God. 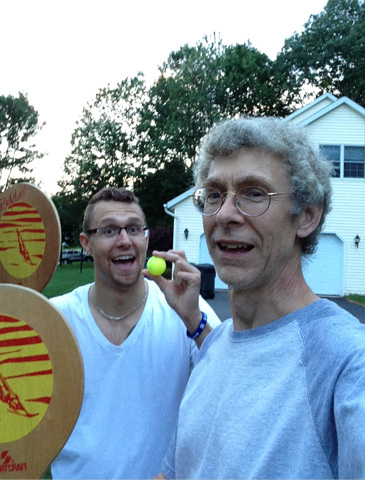 From James, father of Andrew: This photo is of Andy and me about one month before he left for boot camp. As a family, we vacationed often at Long Beach Island, New Jersey. We always did some regular things – the beach, ice cream, bike riding, mini golf, and … playing Rally Ball! It was a great game for the beach. One year, probably middle school age for Andy, he and I set our record of around 190 hits; well above any prior record for any of us ... except that his brother and I just set a new record the day before of over 210. Ultimately, my other son and I set quite a record – 498 hits. Well, on this evening three years ago, Andy and I went out and had some good rallies. Then we got to 239 hits – a record for the two of us! It didn’t top 498, but setting our own personal record sure felt great for both of us! I love the satisfaction and enjoyment in Andy’s face in this photo.