For many of us, the comments people say or the behavior of those who know that we have suffered the death of a loved one are memorable. I know before this event in my life, I had no idea the things people would say or do. The one that fascinates me to this day is when I talk about my son, Bryon, and someone will look or walk away. It is as if by not talking about it, somehow the event will go away. There is an article on the TAPS blog titled, “Beyond the Burst of Support” written by Shauna Springer that addresses this issue. In the article, she writes, “So often, we’ve heard that grief ‘changes our address book,’ but the warning doesn’t necessarily make it easy to face.” This week several people shared their thoughts about those times in their lives when people have been supportive and others when they’ve had to delete a name from their address book. Enjoy reading their contributions. 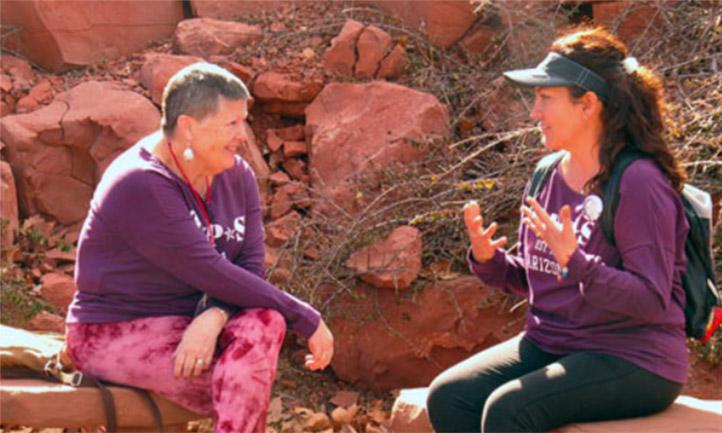 Last week, I said if anyone wanted to write about an additional event at a TAPS Seminar I would gladly add it to this week’s message. Cheryl, mother of Jack, shared her experience. She wrote, “At my very first TAPS Military Survivor Seminar, we had the most awesome time. We got to stay in a great place, and we were fed constantly! We got to write to Jack, tie it to a balloon and send it up to heaven. It was very good. We swam at the hotel, and I got to sit in the hot tub! It was all so great! I got to meet Ashley's (Jack’s wife) mentor. She is great!”

Would you like to share a question or read how other survivors respond to a topic or question you have? I would love to gather some thoughts for future Saturday Morning Messages. You can also submit favorite songs that are meaningful to you. It can be helpful to read and hear how others cope.

In addition, we can also honor our loved ones by communicating with each other through writing. You never know how your words may touch the heart of another. I encourage you to reply to the Saturday Morning Message by emailing online@taps.org. It is best to send your responses to me by Tuesday of the following week. If you would like to send a message thanking one or all of those who wrote this week, send it to me and I will make sure your thoughts are passed along to them. Thanks to everyone responding this week and those who read this message.

Tina, mother of Jonathan, says that her son’s first angelversary is coming up soon. Tina wrote, “There are so many emotions right now I don’t know what to do, and emotions toward so many people. Yet I know that I will be facing these people and emotions all at the same time and place at his anniversary because they all will want to be here.” Since many of us have faced this, I thought a good question this week would be: What do you do on your loved one’s angelversary? Sharing ideas can be most helpful especially at a time like this. We look forward to your responses.

Tina, mother of Jonathan, also sent these songs: Tina wrote, “There are two songs that make me really think about Jonathan. The first is  “Letters from Home.” The other is  “Night at the Roxbury” because he was such a jokester. He and his friend had that song down and could lip sync it with all the moves.”

From Michele, mother of Stephen: It was just a couple of weeks ago, a family member’s mother-in-law passed away. An old friend of the family I ran into struck up a conversation asking me how I was doing since my son passed. Mind you, I had seen her a year after my son passed away and she never said a word to me. Into the conversation, she informed me that she and her husband had a son who died by suicide. I let her know how sorry I was for their loss and gave her a hug. I had no idea of their loss. He would have been 47 now, so it had been over 20 some years since his passing. So as we talked more, she looked at me and said, "It had to be easier for you when your son passed, than for me as your son had been away from home being in the service and our son lived close to us and worked with his dad everyday.” I only could respond, "I understand my son had been in Korea, then Texas, then to Afghanistan, but I still miss my son something terrible."  It truly is a shame that people can be so ignorant when it comes to someone's loss. When I hear of someone losing a loved one, the first thing that goes through my head is the pain that they are going to endure. I just want to reach out to them to make them feel better, to let them know how I understand, to listen to them as they weep. I am so grateful for my TAPS family and how my heart has become even more caring since my son passed away. If there is anything I can do to help someone through their loss whether it was something from many years ago or just yesterday, I would never think that my pain was worse than theirs and would always have an ear for them, in addition to my arms for a good hug.

From Marlene, wife of Germany: I love to hear someone be completely honest by saying you will have moments of grief for the rest of your life. I don’t like when people treat my grief as something I will get “over” one day, because I know I will miss my husband for the rest of my life. Whether I find someone else or not, he will always be in my heart.

Bonnie Jo, mother of Andrew: I am going to answer my own question and the other one about “what someone said that took you back a bit,”— my own wording on that great question. We all have probably been through it once or twice as folks just do not know what to say, other than the perfunctory “I am here for you, anytime, just call me!”

So I do like having people notice my license plate and say something. It makes me feel special and I usually do not say much as they always say, “Thanks for your son’s service.” That is enough for me.

When I first ventured out to the grocery store alone, quite a while after Andy was killed, I was ready and had my list of food. I made my way down the aisles and I saw someone who looked familiar. The next thing I knew that person turned away quickly as if she had not seen me and went down the next aisle. What? I was left with the choice to turn into that aisle or hang around in an aisle I no longer needed to give her time to get away and escape!

Finally, I turned to the next aisle only to encounter someone whose name I didn't even remember, but she saw me and she left her cart and pocketbook in the middle of the aisle while she grabbed me, sobbing and saying all the things like, “Call me. I was so devastated when I heard the news on TV and in the paper.” Then she said, “I have just one question Bonnie, just tell me was it friendly fire?”

Oh my God! I told her I was in a hurry and had an appointment to get to. Then I left the stupid cart in the middle of the aisle and ran out of the store. Now I know why some articles and grief books I have read said that most folks travel about 20 to 30 miles away to grocery shop in peace and anonymity for quite some time. There is no right way to approach someone, but even just a “Hello Bonnie. How are you?” or a nod is good enough.

From Bob and Kitty, parents of John:

Best support of all are the hundreds of hugs we give and receive.