I am always pleasantly surprised when I read the responses to the weekly question and this week was no exception. The response sent by Betty, mother of Michael, included a picture of an item given to her at her son’s funeral. Betty wrote, “At Michael’s service at Dallas-Fort Worth National Cemetery, one of the Marines from Michael’s unit presented me with an item. Much was a fog that day (and for a period after that), but I remembered he told me what it was as he placed in my hand and gave me a hug. I got the impression that it was something he was not supposed to give me, but felt I needed to have. I’ve attached a photo of it with this email. It is shiny, with the USMC logo etched in, but had scratches on the back when I received it. I carry it in a small bag, in my purse, always. Even though I do not know what it is, it represents the love Michael’s unit had toward him—and that is sufficient for me. Do you have any idea what it is?” We hope someone will solve this puzzle for her and enjoy the rest of the message. 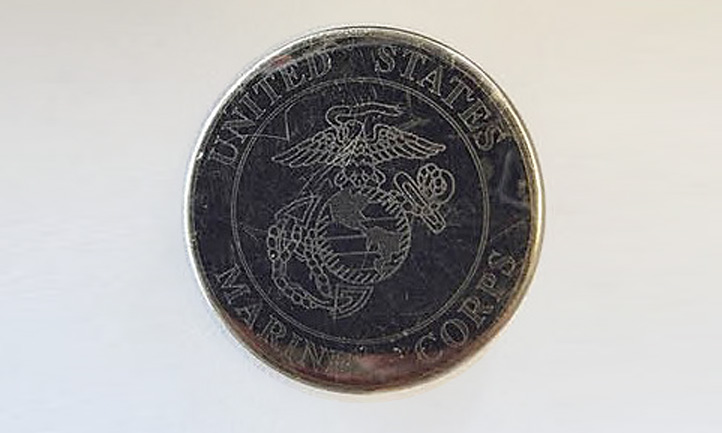 There were so many responses to this week’s question that it will be extended a week and more people can share important items, so the question will be the same as last week: Have you saved certain things that belonged to your loved one that have become priceless to you? Tell us about them and send a picture if you like. We look forward to your responses.

Would you like to share a question or read how other survivors respond to a topic or question you have? I would love to gather some thoughts for future Saturday Morning Messages. It can be helpful to read and hear how others cope. I encourage you to reply to the Saturday Morning Message by emailing online@taps.org. I directly receive all responses that are sent to this address. In order to have your reply included in the next week’s message, it is best to send your answers to me by Tuesday morning of the following week. Thank you to everyone responding this week and those who read this message.

Leslie, mother of Eugene, sent two songs this week. One is Morning Prayer sung by Jason Gould and the other is My Immortal sung by Evanescence. Leslie wrote, “My Immortal is about a spirit that stays with you to the point of wishing they might leave. First, I like the sound from the group and that it’s a ballad that gets what it’s like to want a spirit staying with you forever. I also believe the lyricist understood that time doesn’t heal...You adjust. As I listened I thought of my son who I miss dearly.”

Responses from Survivors to last week’s question: Have you saved certain things that belonged to your loved one that have become priceless to you?

From Michele, mother of Stephen: You know mothers save everything that our children make, because they made them. Gosh, even though they meant something then, they mean that much more now that my son, Stephen, is gone. My husband had an excavating business. Stephen was so intrigued with the excavators and loved to draw. So, he decided to make a couple of pictures for his dad. He was our Picasso. Of course, my husband was so proud of him that he framed them. We just cherish those mementos! This is one of the pictures. 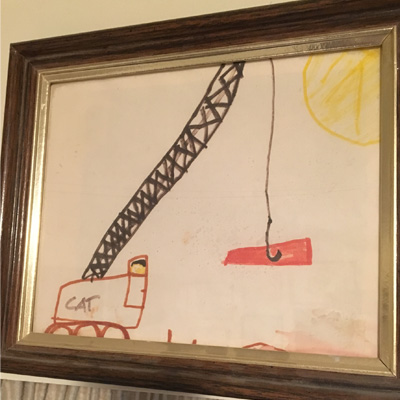 From Tabitha, wife of Michael: When my husband passed, he left behind my two step sons. Since I was their step mom, they moved in with their mother. I wanted to make sure they had something to remember him by once they moved. I found an old picture of my husband and the kids. It was one of my husband's favorite pictures. In it, he is wearing a striped blue shirt. I made a copy of the photo and framed it with the shirt. The kids loved it and I know they have a piece of their dad whenever they need it.

From Leslie, mother of Eugene: I saved a few things from my son. Actually, I saved a trunk full of things that he put in the trunk. But I saved one in particular that I will tell you about. When Gene was in fourth grade, New York City Arts sent a team to his elementary school to do art lessons for several weeks. He loved it because it was different and he had no boundaries. He created a batik drawing of a dragonfly. The visiting team liked it enough to frame it and show it and others from various schools at the New York City Children’s Art Museum where it hung for a school year.

He got it back and gave it to me. I hung it up. Years passed and I decided to reframe it. The place did a great job. Gene was now on leave and came home to see his childhood work in this new frame and questioned my sanity. He wanted to know why I would spend money on his art....but I could see how overjoyed he was. It was hanging over his flag box until we decided to sell our apartment. 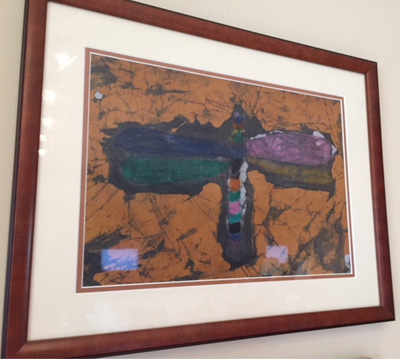 From Samira, mother of Andres: From my son, Andres, I have all his belongings. What I got from Japan and all he had at home, but I have one of his pillows and a T-shirt  that I sleep with or hold when I want to feel him. Andres’ belongings are my connection with him, and I am not planning to give them away.

From Sheryl, mother of Adam: I moved out of state less than a year after Adam died and had to really prioritize what I kept. It was very tough and I shed a lot of tears.

Pictured are the items that I moved. Adam made the gargoyle in middle school. It reminds me of his creativity and love for fantasy. The Canadian flag is from a family trip to Winnipeg when Adam was about 4 years old. We had other trips to Canada, too, that provide many happy memories. That flag reminds me of his sense of humor. As a joke, Adam liked to try to convince people, even those who knew him since kindergarten, that he was born in Canada. For a year or so he would end sentences with a Canadian, “eh.” When on stage, he often used a Canadian accent. These little things bring tears and smiles. 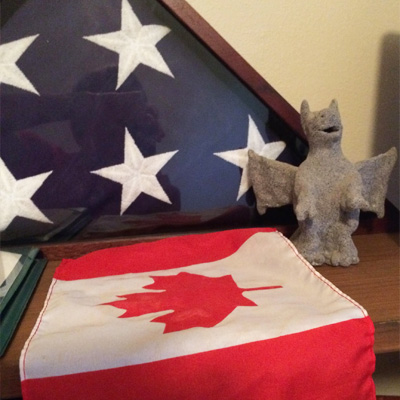