The idea for the question this week came from a discussion we had on the Tuesday general chat about activities that helped lift us from grieving. Debby, wife of Thomas was one of those participating in that chat. She talked about the quilts she makes, so I thought placing her beside one of her quilts would be a good way to open this week’s Saturday Morning Message. It is the hope that while reading the responses today, others may find an activity they have not thought about that might be helpful. 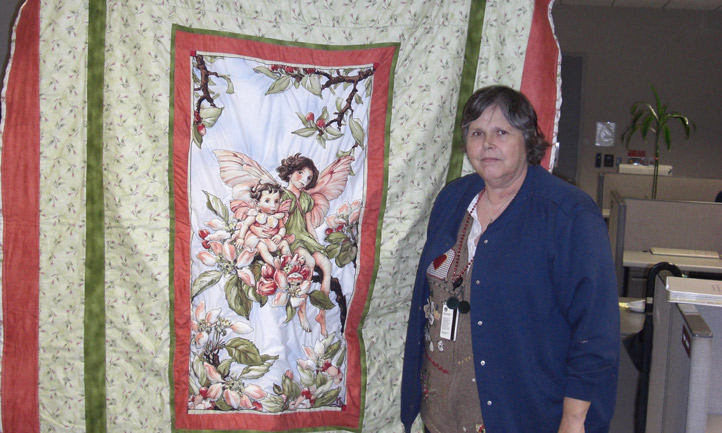 I guess that you could say that the Saturday Morning Message became my activity after the death of my son, Bryon. I have always found connecting with others to be beneficial, so when I became a peer mentor for TAPS and wanted to hear about the grief journey of others, the idea for this message was born. Now I enjoy reading thoughts from others and putting them together in a blog form so we know we are not alone. So I am going to say that writing is my activity.

Please enjoy the contributions that are in this message and if you would like to send a message thanking one or all of those who wrote this week, send it to me and I will make sure your thoughts are passed along to them.

Traumatic experiences change our lives. With this change comes a new understanding when someone we know suffers a similar experience. Let’s share some of the things we now do after learning that friends and family have been transformed by their own loss of a loved one. The question this week is: How do you pay respects to other folks after the death of their loved one — is it any different now than before your own loss?

Robin, wife of Alex, sent the song of the week, which is “Red is the Rose” sung by the High Kings, which Robin wrote “is a favorite song he used to sing to me.”

Last week's question: Do you have a craft or activity you like to do to help with your grief journey?

From Kelley, daughter of Donald: The question of the week is one I never would have put thought into until I received the email. It took me quite some time to have ANY strength to do much of ANYTHING until I was blessed to find the TAPS organization. So I have learned through my first grief retreat how to better express my feelings for the loss/murder of my dad and amazing tools to help me with the rough moments. I am able to retrieve them fairly fast when I feel an anxiety attack coming on or depression sinking in. What I do for relief from my grief is a few fold ... I reach out easily and I have decided to teach myself how to paint and sew.

Since choosing these activities, I have found a sewing club online and a neighborhood site. In the past, I would always put others before me. It began to wear on me instead of being beneficial for everyone. I am learning that a well-deserved break is healthy for everybody that I have in my life! If Kelley is happy, nobody gets hurt! Lol. The lesson here for me is: in order for me to be of service, I have to have my basic needs met — time alone, time to pray, time for exercise, and time for activities that allow me to reflect on my dad, honoring the father he tried to be. 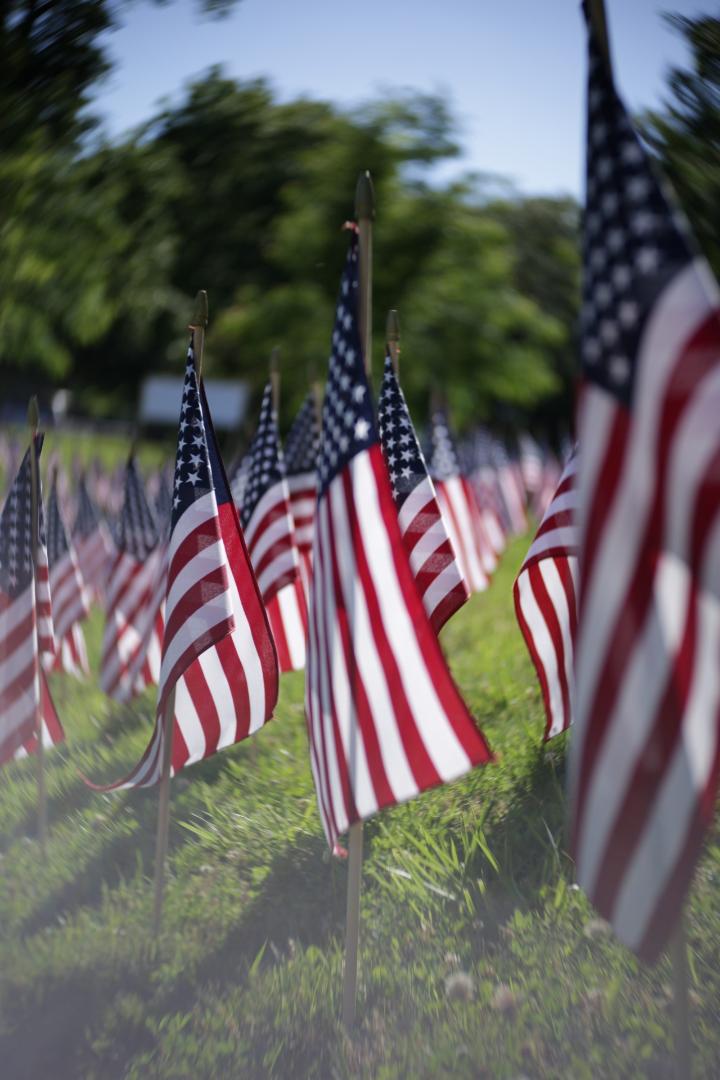 From Robin, wife of Alex: To answer the question about crafts, my husband, Alex, used to tell me that trying new crafts was my craft. I find myself struggling to do any crafts since he died. Photography is my favorite and he let me buy a new camera and lens that I had been wanting a few months before he died. I am hoping to get back into it once we have some nice weather. I like to do landscape photography or "artsy fartsy" stuff as he called it.The flag picture is from a display by Flags for Forgotten Soldiers. It is to bring awareness to veteran suicide, which is how my husband died. I met the man that started this at my local TAPS meetings.

From Kitty, mother of John: After John died, I immediately went to our photo box to make albums of our children.The time had come for John's album. When our children married, we gave them most all of their pictures, so I was worried that I wouldn't have many of John. Boy, was I surprised! I had a picture of almost every year of his life. Only God knew that someday I would need pictures to recreate his life for an album, and later into a scrapbook. This was a soothing and relaxing activity to help me get through the early stages of grieving. Even now, I take time to thumb through his photo album and scrapbook. I still plan to do a scrapbook for his widow and step-son. 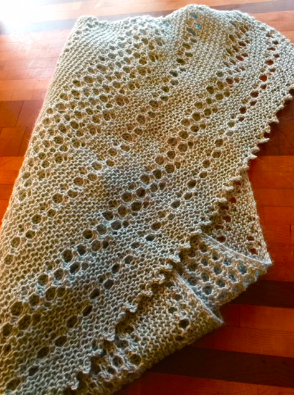 From Holly, mother of Daniel: I’ve always been an avid knitter and when my sons were growing up, I made them special sweaters and hats. I tried to make special gifts for family and close friends, but as a busy mom of four growing sons and later three step-daughters, too, their special gifts became fewer and fewer.

After Daniel was killed though, knitting became an obsession. In those early days, it was the only time I didn’t feel like everything I knew was foreign and out of control. It was the only time I felt tied to the world and grounded. It became a tangible way for me to give back to people who were there and are still here loving me through my agony. As I work on projects for others, I think about them and their lives, taking my mind off of my troubles. I feel like it is a way for me to bring blessings to others. I make socks, hats, blankets, sweaters, ponchos, etc., and each thing I make is for someone in my life.This picture is a blanket made of baby alpaca wool... super soft and though it’s open weave and lacy, it’s really big so it can be wrapped around and around or worn as a scarf, too. And it’s warm! I love watching people open the gifts and realize that they are special to me. 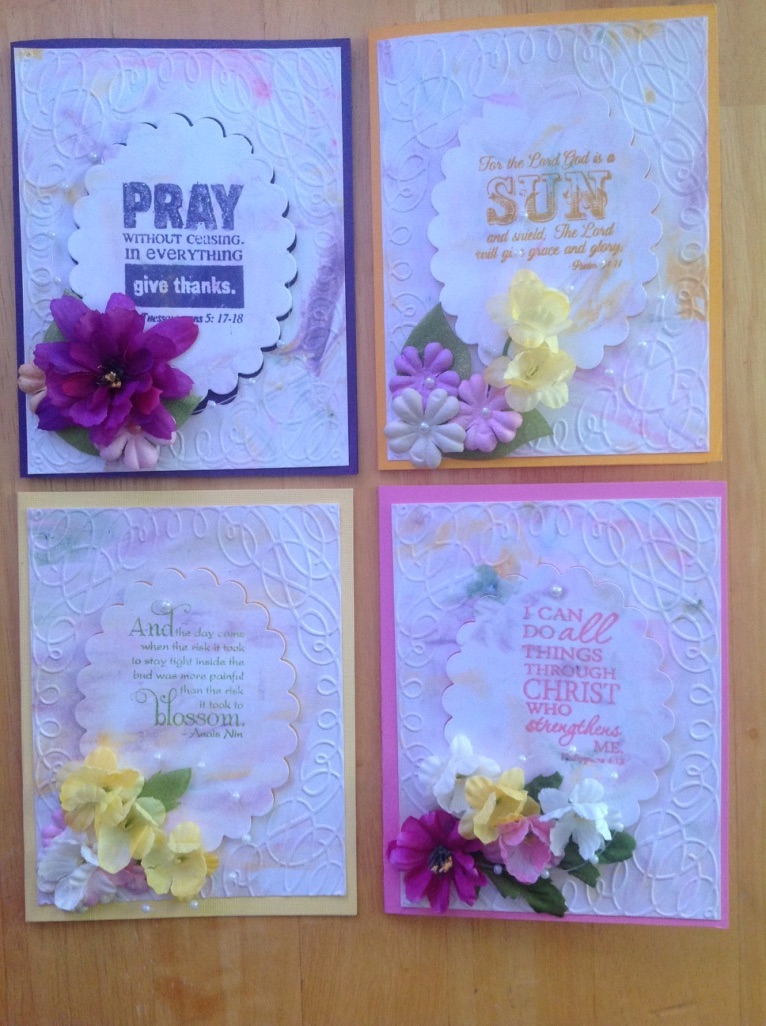 From Kathlene, mother of Peter: I have been crafting for 60-plus years and became exclusive to mostly card making from the early 90s. Before moving to Texas, I worked full time and the cards I made were used for my card ministry at churches, on the prayer teams, and for the Prison Ministry for women. I, among hundreds of others all over America, also donated cards to the Operation Write Home Organization which sent hundreds of  blank cards in boxes monthly to the deployed.

Moving to Texas to be near my son in 2012, and since I lost him, to suicide five years ago this July, I have used my time exclusively to making cards. In 2014, I made nearly 1,000 cards and last year slowed down to 464 cards for the year.

I joined Soldiers Angels’ letter and card teams and for several years sent cards and notes to deployed soldiers, and often enclosed a blank card for them to send home to their loved ones.  At this year's TAPS Texas Regional Seminar at Fort Hood, I spoke with a chaplain who asked me to contact another chaplain as they need cards for their Pray Fast for a group of soldiers.

When my son, Peter, retired after 20 years in the Army in 2013, I made him a five-fold card which told him how proud I was of him as a son who loved and served God, a soldier who served our country, as a husband, as a father, and most of all, as my hero! Watching him read and look at his card was so special to me because I could see his heart was touched. That was the next to the last day I saw him and his family.

Making cards can be like a full-time job with the quantity of time involved creating mostly one-of-a-kind cards. I do it to keep busy, and to soothe my soul. I call it soul therapy. It's also my recreation. It is my happy place. I know that God gave me this gift of creativity and I try to give cards to people who could use a bit of uplifting. I call them ”warm fuzzies!”

The Saturday Morning Message was created so survivors can share questions and read how others respond. By sharing coping strategies, together we become stronger. I am always looking for questions for future messages. You can also submit favorite songs that are meaningful to you.

You never know how your words may touch the heart of another. I encourage you to reply to the Saturday Morning Message by emailing online@taps.org. I directly receive all responses that are sent to this address. In order to have your reply included in the week’s Saturday Morning Message, it is best to send it to me by Tuesday of the following week.