Andre Roberts has made time for our TAPS families and always welcomes them with open arms and a big smile whether it's on the field or off​.  We celebrate his recent ​accolade as the recipient of the NFL's Salute to Service Award​ ​and are honored that TAPS was considered in his selection.

Most recently, ​TAPS families spent time with Andre​ and the Falcons at the Falcons Training Center.  Andre wore the initials of a fallen hero on his helmet as part of the Falcons Salute to Service. He had an opportunity to learn about the service member he was honoring and spend time with the family at the Falcons practice over Veterans Day weekend. Earlier in the season, Andre also had his cleats emblazoned with "TAPS" to call attention to our mission and the sacrifices our families have made.  As a son of parents who served in the Army, Andre is part of our military family and we are proud that the NFL and USAA recognized hi​s service.

"On behalf of TAPS and the 75,000 military surviving family members across America who have been touched by our organization, congratulations to Andre! We thank him and the Atlanta Falcons for all they do to honor TAPS and help share our message of hope and healing. We are grateful to people, like Andre, who choose to honor and remember the fallen and recognize their families," said Bonnie Carroll, TAPS President and Founder. 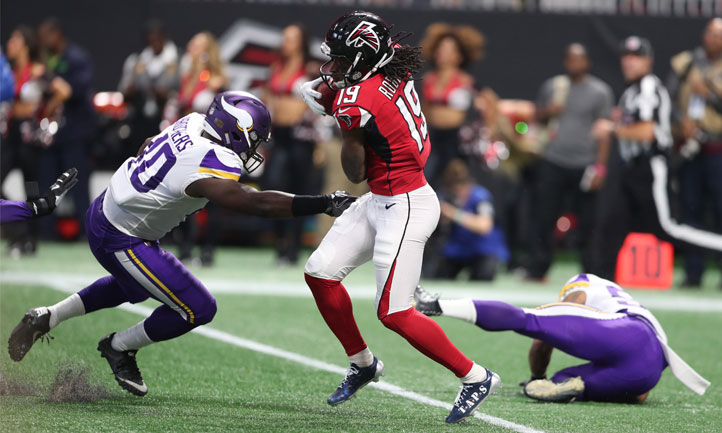 Andre Roberts honored TAPS in the My Cause My Cleats Campaign

"True heroism is measured by a person's willingness to sacrifice themselves for the safety and freedom of others. The men and women of the U.S. Armed Services are the greatest collection of heroes in our world today. I'm honored to salute their service and I'm forever grateful for the military heritage of my mother and father, both Army veterans, as well as the values of service to country and fellow man I received at the Citadel. May God bless the brave men, women, and families of the U.S. military who have sacrificed so much for our great country."  ~ Andre Roberts

The NFL and USAA awarded Atlanta Falcons wide receiver Andre Roberts with the 2017 Salute to Service Award presented by USAA. The award was created to acknowledge the exceptional efforts by members of the NFL community to honor and support members of the military community. 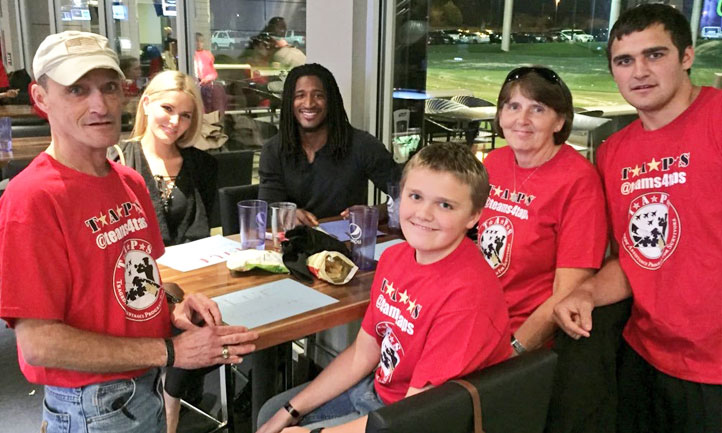 Posing with TAPS Families at the Falcons Training Center

Roberts, whose parents served in the U.S. Army and is widely engaged in military appreciation events with the Falcons, will be recognized at NFL Honors, a two-hour primetime awards special to air nationally on Feb. 3, the eve of Super Bowl LII, at 9 PM (ET and PT) on NBC. NFL Honors will be taped earlier that evening at Northrop at the University of Minnesota in Minneapolis. USAA, a leading provider of insurance and other services to U.S. military members, veterans and their families, will contribute $25,000 in Roberts' honor to the official aid societies representing all five military branches.

"Andre's support of the military community is authentic, genuine and greatly appreciated. Having grown up the son of two Army members, he knows the sacrifices military members and their families make," said Vice Admiral (Ret.) John Bird, USAA Senior Vice President of Military Affairs. "Giving back to those who are willing to give all makes Andre a well-deserving recipient of this award."

Andre Roberts' passion for the military stems from his childhood, growing up with parents serving in the U.S. Army. Throughout his time in the NFL, Andre has participated in numerous military appreciation activities with his respective teams. In his short time with the Atlanta Falcons, Andre has expressed extreme gratitude to the military with multiple visits to local VA hospitals, spending a day fishing with veterans at 'Fishing with the Falcons' and selecting the Tragedy Assistance Program for Survivors (TAPS) as his organization for My Cause, My Cleats. His coach, Dan Quinn, was the 2016 recipient of the Salute to Service Award. 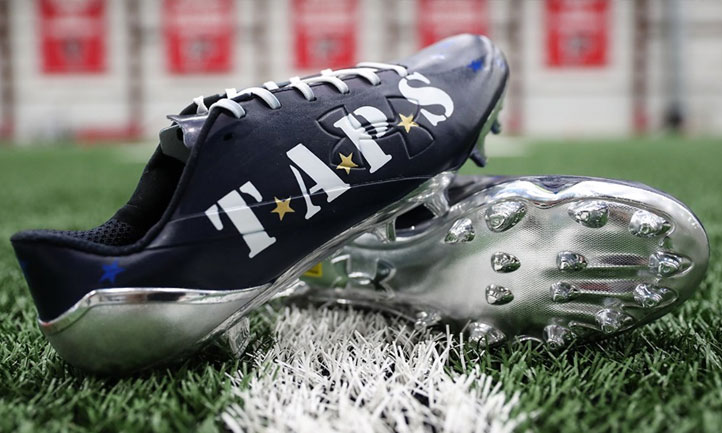 Andre's TAPS cleats worn in NFL regulation play for the
My Cause My Cleats campaign.

Andre's reach goes beyond team-based military community service and well into a deeply diversified off-season travel schedule to military bases across the nation. He volunteers his time to camps offered to youth in grades 1-8 that take place in two three-hour sessions on consecutive days. The camp consists of different stations that include instructional learning and competitive-based games. Andre has also hosted previous camps at Nellis Air Force Base in Nevada, Luke Air Force base in Arizona, Naval Air Station Oceana in Virginia Beach, Fort Lee II in Richmond, Fort Bragg in North Carolina, Joint Base in South Carolina, Schofield Barracks in Hawaii, Yankee Stadium in New York, Fort Jackson in South Carolina, Fort Benning in Georgia and Fort Campbell in Kentucky.

In October 2017, all 32 NFL clubs nominated coaches, active and retired players, and team executives and personnel, who best demonstrated support for the military community. The nominees were publicly announced in November and the submissions were evaluated by a panel of judges, including last year's award recipient, Atlanta Falcons head coach Dan Quinn who is also a staunch supporter of TAPS. Nominees' credentials are evaluated based on the positive effect of the individual's efforts on the military community, the type of service conducted, the thoroughness of the program and level of commitment.

The panel of judges, consisting of representatives from the U.S. military, the NFL and USAA, includes: 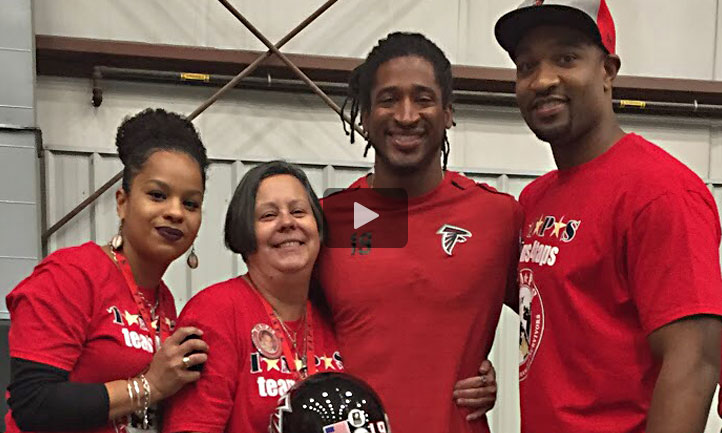