“The Marine Corps Marathon was the most gratifying and humbling yet toughest physical and emotional experience I’ve had since burying my son. It was heart-healing in so many ways.”—Diana Cross, surviving mother

Running a marathon was always on Diana Cross’s bucket list. She and her husband, Dan, found TAPS after the death of their son, Army National Guard SGT Andrew Cross, in 2009. “When I found out I could run in the Marine Corps Marathon for Team TAPS, I felt like it was my Andrew telling me, ‘This is your marathon, Mom,’” Diana said. “TAPS has done so much for us; it was time to start paying it forward.” And pay it forward they did: Diana and her son Jeremy raised more than $1,500 for TAPS by race day in 2017. 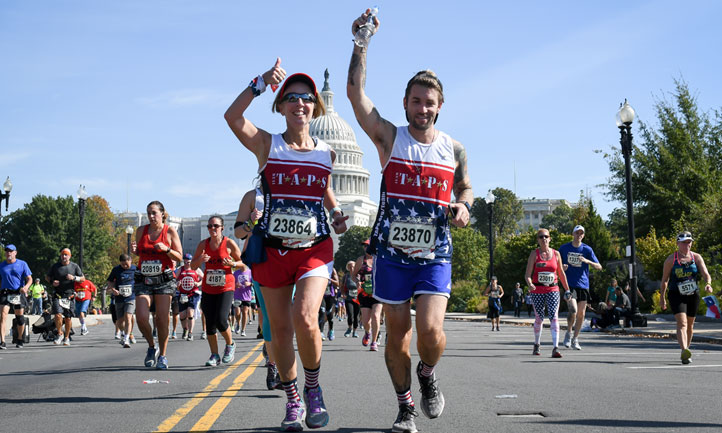 They trained throughout the summer—or at least Diana did. “I hired a local running coach, and he helped me make a plan,” she said. “I live in North Carolina, and Jeremy lives in New York City, so we weren’t able to train together. I travel a lot during the summer and did my training in nine different states, which helped make the long runs fun. I felt like I was very prepared.” That wasn’t quite true for Jeremy, she added: “He is young and fit, so he didn’t train as diligently as he should have, so he was feeling the pain weeks later. Lesson learned: He will train for 2018!”

Andrew was not a runner. “Poor guy had the shortest legs,” Diana said. “He was only 5’3”, so running was his least favorite sport. He was a serious weightlifter, though, and his shoulders seemed as wide as he was tall. But he was my number one fan—and that’s why I run. I’m making my baby proud.”

On the day of the marathon in Washington, D.C., excitement and nerves at the start gave way to physical and emotional challenges later in the race as Diana encountered the distance runner’s nemesis. She “hit the wall” at mile 20 on the 14th Street Bridge. “I honestly don’t think I would have finished if I didn’t have both of my boys encouraging me to push through—Andrew from above and Jeremy by my side,” Diana said. “I never thought I’d get to the point of saying I am so blessed, but I am.”

Dan Cross is a Marine Corps veteran, so this weekend was special for the entire family. On race day, Dan participated in the “wear blue mile,” holding an American flag beside a photo of Andrew, standing in honor of his son throughout the race. This passage, along Hains Point through mile 11 of the course, is lined with 225 posters with the names and photos of fallen American service members. It is a poignant and sobering reminder to all runners of the service and sacrifice of our military. Diana and Jeremy spent a long time in this mile during the race. “I wasn’t prepared for how emotional it would be,” Diana said. “I knew six of the young men honored in that mile, so of course I had to stop and get photos with all of them.”

The support and camaraderie Diana and Jeremy experienced as part of Team TAPS made it an easy decision to register again in 2018. “I made some great running connections with other moms,” Diana said. “And we’re all running again this year.”

Like most second-time marathoners, Diana and Jeremy gained knowledge they will take into the 2018 race. “Jeremy is going to train harder this time, and I want to work on my core muscles and plan my race day nutrition better,” Diana said.

There’s one thing they plan to do exactly the same, and that’s to honor Andrew. “He was my number one fan, and that’s why I run,” Diana said. “I’m making my baby proud.”

Registration is now open to join Team TAPS for the 2018 Marine Corps Marathon, 10K, and Kids Run. There is no registration fee or fundraising obligation for military survivors; all other runners agree to raise a minimum of $600 for TAPS in exchange for guaranteed entry to the race. Contact Team TAPS for more information at teamtaps@taps.org.