After four years and a half years of late-night study sessions, writing research papers, and sitting in lecture halls, Joanne Staral was relieved to finally be able to put on a cap and gown, walk across the stage, and receive her college diploma.

But Joanne wasn’t the typical college graduate. She wasn’t a twenty-something entering the real world for the first time. Instead, Joanne was 61 when she graduated. She had raised four children, became a grandma, and experienced the death of her husband and only son. Joanne attended a community college earlier in life, but her dream was put on hold when her husband died. 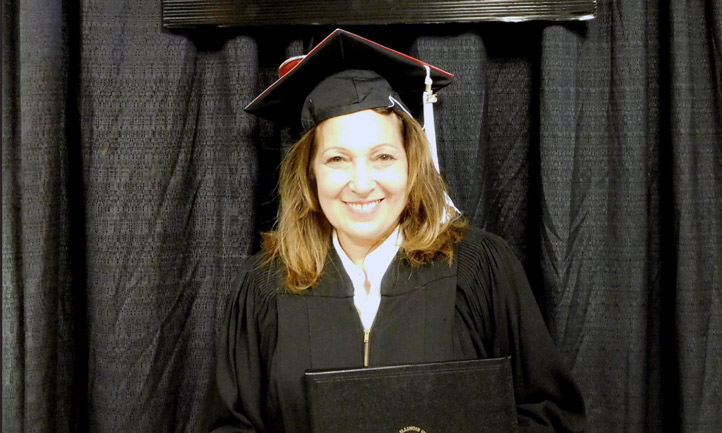 And Joanne had a different motivation for earning her college degree — she was determined to keep a promise to her son, Marine Cpl. Tom Staral, who died in 2011 from a rare form a cancer. Tommy had deployed to Iraq and was on his second deployment in Japan when he was diagnosed.

Before Tommy died, he encouraged his mom to earn her degree. “I barely finished high school, and he knew I wanted to go back to school,” Joanne said. “He told me ‘I don’t care what you go to school for, Mom, but just go back and graduate for both of us.’”

For almost five years, Joanne devoted all of her time and energy toward her degree, but once she graduated, she decided she needed to focus on herself and her grief journey. Joanne found herself at TAPS and gravitated toward the TAPS Peer Mentor program.

She realized she had spent her time in college mentoring other students who needed help with schoolwork, and helping others just felt right. Going back to school and fulfilling the promise she made to her son gave Joanne a sense of empowerment that she needed to companion others through their grief.

“When my son was dying, it was a horrible feeling to feel so powerless,” Joanne said. “But it’s empowering to be able to help others. I couldn’t help my son, but maybe I can help somebody feel a little better.”

Joanne is certain that Tommy would be proud of her — not only for earning her degree but for using her story to be a source of hope for those newer to grief.