Hundreds of TAPS survivors attended NFL football games and events around the country that brought families together to honor the lives of their fallen heroes.

The NFL’s Salute to Service is a year-round effort to honor, empower and connect service members, veterans and their families. The program culminated in a series of games and activities throughout the month of November. 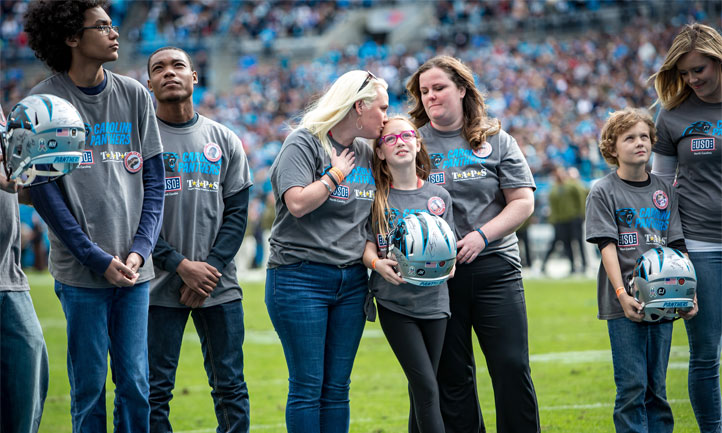 As an official military charity partner, TAPS has worked with the NFL for the last four years to help families honor the service and sacrifice of their fallen heroes while connecting with one another and creating new memories around their shared love of football. teams4taps events have included meet and greet with the players, honors on the field, participating in flag ceremonies and others.

The Los Angeles Rams, despite the challenges of impending wildfires, held an incredible two-day event for TAPS families who were honored on-field at the game. Players with the Atlanta Falcons wore the initials of fallen service members on their helmets during their Salute to Service game and met with the families of the fallen heroes at practice. TAPS families were also invited to stay onsite at the Falcons’ practice facility for the Salute to Service weekend. In Houston, TAPS families were invited to a family tailgate party and spent the day with the Texans.

See photos and video tributes of some of the participating teams:

Do you have a story about your hero and a favorite player that you would like to share with teams4taps? If your loved one had a special story or connection with a sports team or professional athlete, we would love to hear it. Submit your stories and photos through our online form or email  teams4taps@taps.org.

Photo courtesy of the Carolina Panthers