Cherry Hill resident Melinda Kane came to TAPS not long after her son, Lance Cpl. Jeremy Kane, was killed in Afghanistan in 2010.

TAPS resources were offered to her and her surviving two sons, and it wasn’t long before the family was participating in the National Military Survivor Seminar, retreats and other TAPS events. Melinda sought support for herself in the online community — scheduled chats moderated by TAPS staff that allows survivors to “meet” in virtual support groups from the comfort of their homes. 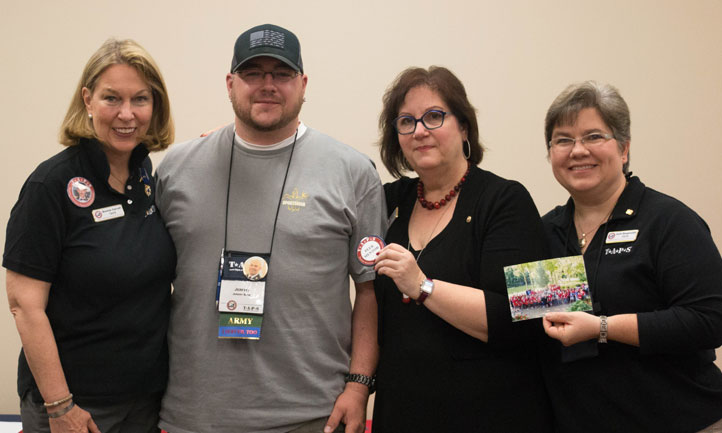 It would be a couple years after the loss of her son when Melinda felt she was in a place to give back and support others who may be grieving a significant loss. She pursued training as a TAPS Peer Mentor, and learned how to be a companion to others whose losses are more recent.

“I became a Peer Mentor after receiving so much care and compassion during my early days of grief,” Melinda said. “I have always had great admiration for Bonnie (Carroll's) vision of peer-to-peer support during the grief journey.”

Bonnie Carroll established TAPS after the death of her husband in an Army plane crash on November 12, 1992. The organization was founded on the principles of best practices in peer-based emotional support for bereaved survivors. Peer support gives those who have had a unique experience the framework to connect with another with that shared experience.

This weekend, hundreds of survivors are gathering in New Brunswick to participate in the TAPS New Jersey Regional Seminar and Good Grief Camp. The seminar is a weekend-long event that includes workshops with grief professionals, and small group sharing sessions led by peers that are designed to help military survivors connect with one another. The camp, for children and young siblings of fallen service members, is held in conjunction with the adult seminar.

These days, Melinda has turned her grief into motivation for supporting other survivors. She not only is a Peer Mentor, she has joined TAPS staff and now regularly trains groups of military survivors on the TAPS Peer Mentor model of support. She also moderates a few TAPS online chat groups a month.

For survivors who may be unsure of attending a TAPS seminar or other TAPS event, Melinda advises to take things slowly and to reach out to someone who may be in a place to support. “Seek out people who have compassion and a desire to support you,” she said. Melinda found that at TAPS.

Learn more about how TAPS supports military survivors through its Online Community and TAPS Peer Mentor Program. You can also call TAPS at any time: 800-959-TAPS (8277).