That was the subject line of the email for the TAPS Sedona Women’s Empowerment Event. I paused on it during my usual morning scroll through my inbox. I made a promise to myself to work through the heap of emails for at least five minutes every morning to try and put a dent in the mountain of correspondence. Those emails had been piling up for years, right along with so many other things in my life — tax returns, medical bills, etc.

It was almost as if that pile of unfinished business was a barometer for my life. 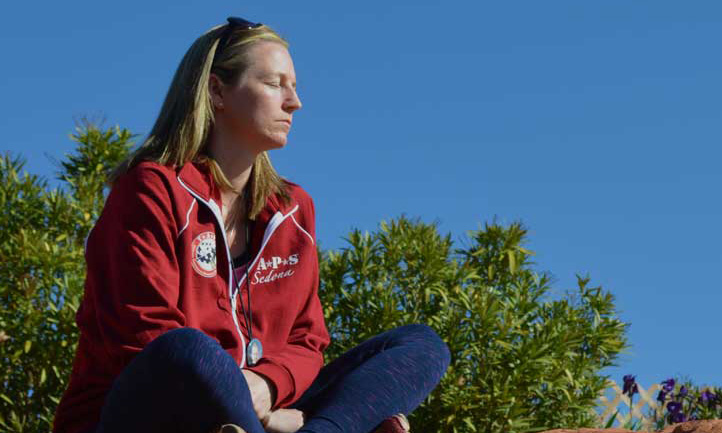 Some days, instead of spending five minutes deleting emails, I would spend an hour stressing and asking questions that didn’t seem to have answers. What happened to the organized, motivated, reach-for-the-stars woman who used to inhabit this increasingly tired and overly-stressed body of mine? I missed her. I missed feeling alive.

So, that morning, call it destiny or call it luck, I paused on an email and opened it. There was a photo of a woman in a TAPS sweatshirt, sitting on a red rock — her eyes closed, meditating and soaking up the sunshine that enveloped her body. I clicked the “Learn More” tab. I read the description and filled out the application as quickly as I could, not wanting to leave time to talk myself out of it.

When I got the confirmation that I was definitely going, I booked my flight. Once again, I didn’t want to give myself too much idle time to change my mind. Not until my plane landed in Arizona did it actually feel real.

As I hopped on the shuttle to the resort, I realized I had indeed taken my first steps toward transformation, just as the email promised.

Looking back, I know that morning I chose to pause and actually read the email from TAPS could have been completely different. I could have simply checked that tiny box and pressed the button with the little trash can image. Was it destiny or luck?

Honestly, I don’t think it was either. I think I chose to take a chance and take my first step to empower myself as a woman and as a survivor. Because of that decision, I am a better, stronger version of myself. I am on my way to finding my new normal.

Are you interested in taking steps towards transformation? Find out more about the TAPS Empowerment Program.

From the pen of…Angela Copeland is the surviving spouse of Marine Staff Sgt. Michael Copeland.