The Grand Canyon has a way of changing you.

You push through extreme difficulty, foster a community through a common bond, and learn that you are stronger than you believed and capable of doing whatever you set your mind to. On our TAPS Expeditions we truly remember the love, celebrate the life, and share the journey.

The small group of survivors who recently trekked nearly 50 miles in less than four days was strong and fierce. The expedition included a myriad of sights and experiences from many boulder scrambles, rocky and undefined pathways, hiking the unknown in the dark, countless blisters, aches and pains, and each struggle worth the awe-inspiring and rewarding views at each break and campsite. The Grand Canyon Backpacking Expedition was the most challenging of the 2018 season, and all of our survivors pushed through their struggles, leaned on each other when they needed and found strength within themselves to make it through. This was a long, personal journey that involved months of training and preparation, and a hard climb from the Bill Hall Trailhead down to the Colorado River and back out of the canyon. They are survivors in every sense of the word.

The process of joining a TAPS Expedition starts many months in advance, as these experiences are designed to challenge, inspire, and transform. For the September trip to the Grand Canyon, notice went out in February, registration opened in April, and participants were selected in June.  Once selected, meetings and training as a team began regularly via video chat. Along the way we learned that we can honor our loved ones and share their stories, all while blazing a trail of our own. If you are interested in learning more, visit taps.org/expeditions to find out how TAPS Expeditions can change your life. The 2019 schedule of TAPS Expeditions will be released soon. 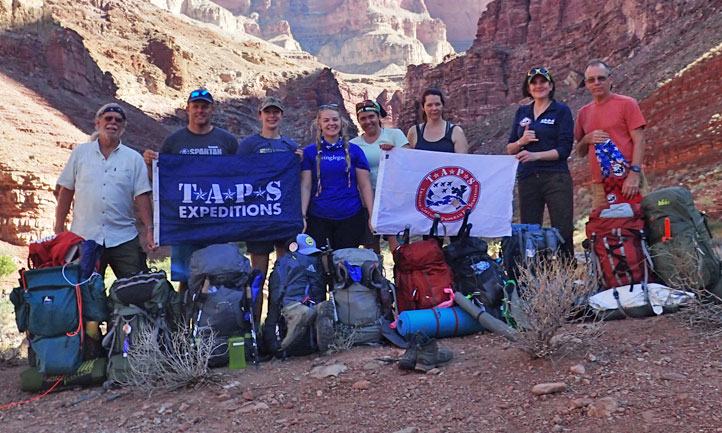 Rachel Hunsell is TAPS Expeditions Coordinator and Surviving Sister of Lance Cpl. J. Kyle Price. The Grand Canyon holds a special place in her heart. In 2015, Rachel participated in her first TAPS Expedition. She then led a group of survivors there as a staff member in 2017. These experiences gave her a sense of purpose and community, and taught her more about herself than any experience had ever before.