September is Suicide Prevention Awareness Month, and military units around the world are joining the Defense Suicide Prevention Office and its partners, including the National Action Alliance for Suicide Prevention, the Tragedy Assistance Program for Survivors and other organizations that are there for those who are struggling or are in crisis.

Suicide is one of the leading causes of death in Americans ages 25-34. But even when people know someone needs help, there are often barriers that keep them from intervening.

“Many people don’t know what to do, or they think they will make the situation worse by getting involved,” said Kim Ruocco, vice president of suicide prevention and postvention at TAPS. “The reality is that everyone has a role to play in preventing suicide.” 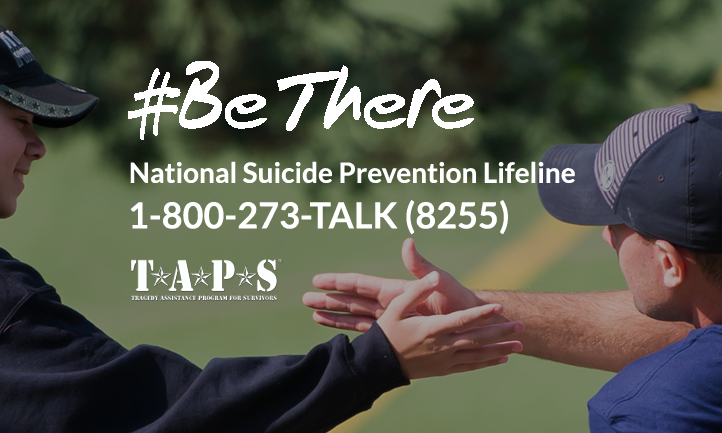 Ruocco recommends everyone learn the basics when faced with someone who may be at risk:

“If you notice your buddy seems hopeless, is withdrawing, or is using alcohol to numb the pain, talk to him about it. It’s OK to be direct and ask someone how they’re feeling and if they’re thinking of suicide,” Ruocco said. Don’t leave someone alone if you think they are at risk, take them to a professional who can help.

Suicide is a perfect storm; it is rarely caused by a single event. “Some people think that a break-up, being passed over for promotion, or another negative event can be a singular cause, but the picture is usually much more complex,” Ruocco said.

Although suicide rates for Americans have increased in recent years, the rate is even higher within the military and veteran population – about 21 percent higher than the national rate.

“Members of the military frequently compare their pain to others’, and will rationalize by saying ‘It’s not nearly as bad as what my buddy has to deal with,’” Ruocco said. “Others are afraid to seek help because they think it will negatively impact their careers.”

The military has come a long way in changing the way it views mental health issues, and it recognizes that suicide is the result of untreated illnesses—like cancer, PTS, mood disorders and TBI—and can be a medical emergency or even fatal.

If you recognize warning signs in a friend, family member or another military member, Ruocco said the most important thing to do is help connect the person to care. “We know people are much less likely to die by suicide if they are in treatment than if they are not,” she said. “If you are struggling, it’s important to reach out to someone for help. There is hope.” Care can be in the form of a medical professional, a chaplain, or even a call to the National Suicide Prevention Lifeline.

By reaching out to someone who is struggling, you help them know they’re not alone. You’re strong. You’re ready. You’re essential. Together, we can make a difference and be there for those at risk of suicide.

The National Suicide Prevention Lifeline is available 24 hours a day, 7 days a week for those who need help or support. Call 1-800-273-TALK (8255), press 1 for the Military and Veteran Crisis Line, serving all service members, veterans, military family members and members of the National Guard and Reserves.

This article was written by Kim Ruocco, MSW,  TAPS Vice President of Suicide Prevention and Postvention. Kim is an internationally known subject matter expert who uses her education, personal experience and information gathered from thousands of survivors to help others more fully understand suicide. Over the past decade, Kim has developed a best practice, comprehensive, peer-based program that offers comfort and care to all those who are grieving the loss of a service member to suicide.