In a Sept. 12 interview with Give An Hour’s Dr. Barbara Van Dahlen, Secretary of the U.S. Department of Veterans Affairs Dr. David Shulkin emphasized the importance of peer-to-peer support as a successfully adopted method of care to its veterans. Just as TAPS has learned, peer support is a critical part of healing for those who are suffering. This has proven especially true for veterans, military service members and military family members for whom peers are critical in initiating trust. 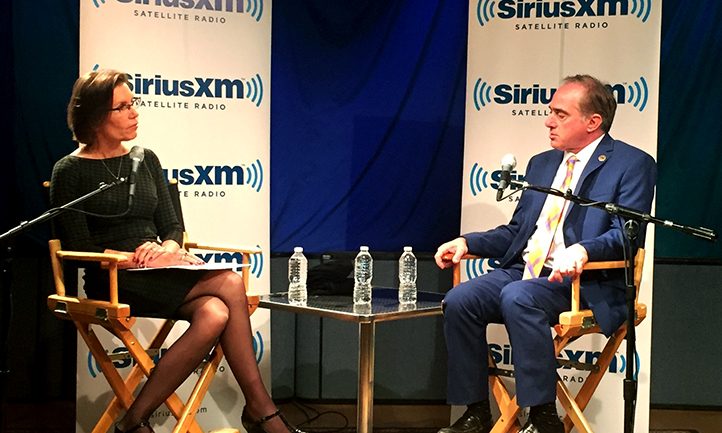 Under Dr. Shulkin's leadership, the VA is working to fix major problems that have bedeviled the department for decades. The VA is undertaking a vast strategic transformation in how it delivers health care, and in particular where it counts most: in matters of life and death. I came away convinced that the approach Dr. Shulkin laid out is a winning one.

In addition to peer professionals, he said telemedicine is another area where he plans to focus energy. This is an important part of the VA’s expansion of care. Recent studies have shown that rates of veteran suicide are higher in rural areas. Telemedicine for mental health can be a key ingredient in reaching those veterans at most risk.

In a broad sense, the Department of Veterans Affairs has embraced an increasingly popular approach to problem-solving among government and nonprofit institutions: collaboration and forging partnerships. Of course, collaboration is not a new concept to the VA, as Dr. Shulkin reminded the audience. In fact, the VA has a long history of partnering with other organizations. For example, after WWII, when Omar Bradley was secretary, the VA entered partnerships with hospitals and medical schools across the country that exist to this day. Still, it is the nature of the VA's current partnership pursuits that is unprecedented.

The VA is working closely with the Department of Defense like never before, since, as Dr. Shulkin put it, those organizations serve the same population albeit at different phases of their life journeys. "I know exactly where all my future customers will come from," he said to laughter. For one thing, a plan is moving forward to build a joint database between the departments that will allow the seamless sharing of electronic medical records, the longtime hope of many a VA critic over the years. Another feature of the new VA-DoD collaboration is to "auto-enroll" separating military service members in VA care if they don't select a health care plan before they're out. No more digging around for DD214s just to get a doctor appointment.

Beyond partnering, the VA is also focused on delivering better care than ever. The VA has instituted unconventional features in its provisions of care that are aimed directly at bringing down the suicide rate. The department now pairs behavioral health assessments with primary care visits. This does two things. It forces all care providers to stay alert to signs and symptoms of mental health problems in their patients. And more importantly, it destigmatizes mental health care among veterans by making it a standard part of a patient's routine physicals.

Dr. Shulkin admitted that he, like all professionals in his field, is distressed over the rates of suicide in the veteran community and the seeming helplessness of physicians and other care providers to curb the deaths. He reported personally getting six to seven notifications a day of veterans who had killed themselves, a terrible tolling bell that keeps his mission urgent. Still, the Secretary of Veterans Affairs gave reason to hope. He said that among women veterans — the VA's most rapidly growing demographic — who were not enrolled in the VA, suicide rates have risen 30 percent in recent years. By contrast, women veterans in the VA system experienced a two percent drop in the suicide rate during the same time period.

That is progress. That is hope.

From the pen of…Matt Mabe, the TAPS Red Team Director of Strategic Operations, is a former Army officer, journalist and writer. From 2002 to 2009, he deployed twice to Iraq, first as a platoon leader and later as a company XO and battalion staff officer, and once to Afghanistan, as an Information Operations Officer.