The picture this week is the card that Carmen, mother of Charles wrote about later in the message. I thought it was so special that it deserved to be the first thing people saw when they opened this week’s Saturday Morning Message. Survivors shared the many different ways they they honor their loved ones. I thought I would add mine as well. This Saturday Morning Message is one of the ways I honor my son. It started out when I was a Peer Mentor and I wanted to keep in touch every week. Now it has grown and I am able to not only honor him, but also your loved ones as we get to know them more and more. Thank you to those who read and also to those who respond to the message each week. We are indeed a family. 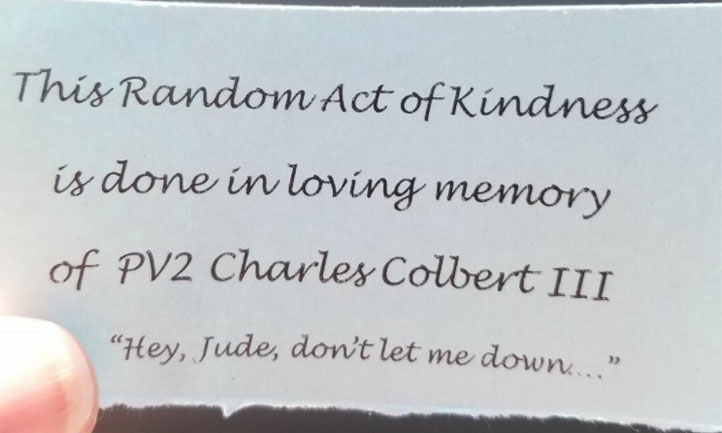 You are an integral part of this weekly connection. You can also submit favorite songs that are meaningful to you.

Since this is a time of year when you may be feeling overwhelmed and want to take some time off from work, Kelly, sister of Samuel sent the question for this week which is: How do you explain to your employer about the emotions of grief and how it may affect your work performance?

From Samira, mother of Andres: “I’ll Fly Away” sung by Ransomed Bluegrass. Samira wrote that this song is special because the death of her son changed her life.

From Carmen, mother of Charles: We lost our son in October 2016. It has been a real struggle to move ahead and also figure out how to honor and remember him. One thing I have done is create Random Acts of Kindness cards with his name on them. I am trying to do at least one act in his name each month. I have attached a picture that was posted on Facebook after one time. I have used this card to donate to missions, send money to people who have lost someone, sponsor two 5k runs (one for a child with a life threatening illness and one for a homeless shelter), and made bags for the homeless. Our school community also responded to our request to send boxes to soldiers that were from my son’s unit and deployed to Afghanistan last Christmas. We sent 54 boxes!.

My sister and her grandchildren volunteered at the above-mentioned homeless shelter last year to serve a Thanksgiving meal. This year my daughters and I plan to join them.

I have also started Wreaths Across America at the small cemetery where Chaz is buried. Last year because of the late start, we only had the ceremonial wreaths. This year all 72 veterans will have a wreath placed on their grave!

From Michele, mother of Stephen:  After Stephen passed away, I received a book that was called, The Empty Chair: Handling Grief on Holidays and Special Occasions. After reading it, one thing that stuck in my head was a quote, “God doesn't cause death, he allows it because of human brokenness.” That quote gave me some peace, to understand my son was so broken after his return from Afghanistan, which caused his death by suicide. So I thought to honor Stephen, I found a bookstore that sold them in bulk. I sent them to the casualty department at Fort Bliss to hand out to other parents to help them in their grief. I also now belong to a group called Soldiers Angels. It makes me feel that I am honoring my son by giving back to the soldiers deployed. When Stephen was deployed, young school children had sent letters to soldiers overseas and Stephen was one of them. He kept them, which made me think it meant something to him. So that was another reason that I wanted to do this, hoping I could make soldiers feel loved and appreciated for what they do for us, just like our loved ones felt at the time they were serving. God bless our loved ones and their families this holiday season.

From Merry, mother of Wesley: I go to his grave and his tree and have a chat a couple times a month. I will place a wreath on his grave at Fort Logan National Cemetery on Dec. 1. In terms of doing something large in the community, I have to think about that.

On Thanksgiving or through the holiday season, I'm going to set a place for him at the table and keep it there.  A website, "A Seat at the Table, Honoring Those Who have Made the Ultimate Sacrifice," is a beautiful example of what can be done.

I may take all the children's books that were his and donate them to Mark Twain Elementary School, which he attended in kindergarten and the first grade. (I've had a hard time "moving him" into the garage rafters so it will be difficult to actually give the books away out of the house.)

From Ruth, mother of James: Jim started a group called “Hats for Heroes” before he went to Afghanistan. It was cold in Germany where they brought the wounded. Jim was stationed in Germany. He called and said that the wounded soldiers (youngsters as he called them) came with very little and could I have the ladies at the church help out with sending hats, gloves and scarves to protect them against the cold. Almost immediately fingers were busy knitting and sewing. Hats were mailed to Germany where most of the wounded were sent. When Jim went to Afghanistan the hats followed for children who were experiencing the coldest winter in many years. The hats are still being made beneath pictures of Jim, along with letters of gratitude for work well done. They go to small children to protect them from the cold, cancer victims and so many more.