Mother's Day is tomorrow, and it can be difficult for many. If support is needed, keep the TAPS Survivor Helpline number, 800-959-TAPS (8277), handy. This week Caryn, mother of Nathan, sent a song that brings her some relief. You will find it in the Song for the Week section of this message. 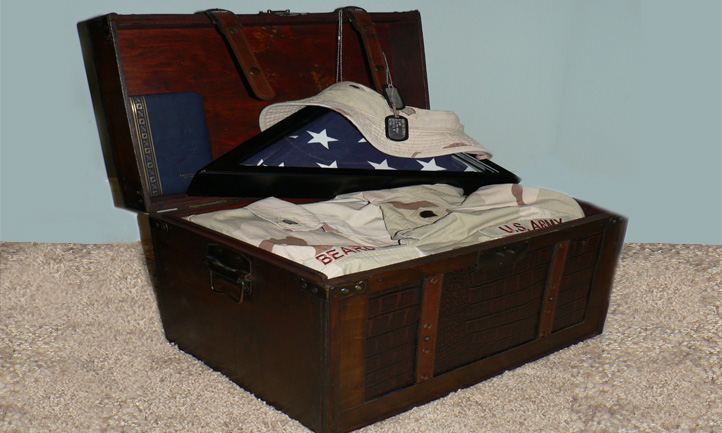 Last week's question was about how we care for our loved one's belongings. In our family, we bought a large armoire with two glass doors and drawers below them. We put it in our son's bedroom, which now serves as my husband's office. Behind the glass doors, we hung our son's dress uniform and some of the pieces that were given to us by the military at or around the time of his funeral. In the drawers, we put scrapbooks and some of his favorite clothes.

There are two articles, "Boxes in the Attic" and "Boxes in the Attic: Part Two," written by Betsy Beard, from the TAPS Magazine archives that give ideas to last week's question. I hope you enjoy this message, but remember that whatever you decide to do is what is right for you and your family.

You never know how your words may touch the heart of another. I encourage you to reply to the Saturday Morning Message question by emailing online@taps.org. I directly receive all responses that are sent to this address. In order to have your reply included in the week's Saturday Morning Message, it is best to send it to me by Tuesday afternoon of the following week.

If you have questions or topics you would like to see addressed, you can send them to me anytime or just write to communicate or share your thoughts. Songs that are special to you are also needed to share with others. I look forward to hearing from you.

Looking through the TAPS Magazine archives, I was attracted to an article titled "Godwinks: Special Gifts from Our Loved Ones," written by Bevin Landrum, MA. A godwink is a sign that your loved one is with you. It could be a song that comes at just the right time, a phrase your loved one said, or a moment or feeling that you experience. For example, in the article, a mom was standing by the water's edge and "she felt something wash over her foot. Looking down, there was a small, green plastic toy soldier in the sand at her feet. She knew then that her son wanted her to find healing and that she was in exactly the right place, dare we say, at the right time." So this week's question is: Would you tell us about a godwink you have had? We look forward to your answers.

Caryn, mother of Nathan, sent the song "A Song For Mama" by Boyz II Men this week. Caryn writes, "Listening to this song brings to mind the sweet words Nathan would say to me over his lifetime. The song brings me some peace on Mother's Day!"

The Saturday Morning Message goes out to individuals as well as the TAPS peer groups in the TAPS Online Community. The first three responders are from one of those groups. They are replying to this week's question and to each other.

From Robert, father of Louis: It's 12 years for us, and we still haven't sorted through the boxes. I tried a few years back and had a meltdown. One day I'll have to sort through it with his boys, but I'll wait until the youngest is around 18. There's really no rush. There's a ton of memories in there, but I have all the memories of him in my heart.

From Kay, mother of David: Robert, I bet that maybe MOST of us who have lost loved ones, are just like you - we have things we haven't gone through at all and other boxes not examined thoroughly when sadness overwhelms us. I still have those same boxes that you do, and as they were important to David Jr., I won't throw them away, but I also know what he would say: If it brings unspeakable torture and heartaches, put in the nearest Dempsey Dumpster. They wouldn't want us to do anything that piles on the pain.

From Annette, mother of Joseph: Joe's room is exactly the same as it was. I keep telling myself I will deal with it when I retire or move. Today I made a decision to give one of his backpacks to his best friend. She has asked and I keep avoiding the issue but know he would want her to have it. She is having her third baby, and I plan on filling it with baby gifts and giving it to her. This is a big step for me.

From Cheryl, mother of Jack: I would like to try to answer the question of the week about what has been done with our loved one's belongings. I have an assortment of answers. Some of Jack's things are on display in our home, some are in bins, some of them are in rucksacks or backpacks. Yes, we have an assortment. When our son died, his wife received these things. When she relocated a few years after his death, she went through his personal belongings, clothes, etc. that she had in their home and asked us if we wanted them. Maybe the time delay or maybe not knowing I would have these things delayed me from processing what to do with them. I don't have any panic about my husband, my children, my grandchildren, or close family going through them and taking something they can use. But for some reason, I will get a panicky feeling if I think of going through them and cutting them up and making things out of them. Maybe it is something I will want later on; I will still have them for that purpose or for when I am ready. Right now, my thinking is associated with the destruction of the things rather than remaking them into something for me to hold or show. This is the feeling I have. I have none of these feelings as I see people with quilts or purses or things like that made out of their loved one's things. I feel no judgment toward them, and I hope no one is offended. As I write this, tears are streaming down my face. This is where I am right now.

Adra, mother of Kyle: Caring for Kyle's things over the past two years has been an emotional challenge that I would never have guessed would be so difficult. We started with cleaning out his apartment, bringing home the most personal things like his journals and some of his clothes, and putting everything else in storage, furniture and all, until we could be in an emotional space that allowed us to cope.

I still keep some of Kyle's things here at home and some in storage. The things most precious to me are the things that, two years later, still have my son's scent on them, like the cap he wore in Afghanistan and some T-shirts. I carried that green cap in my purse for six months. Now, that cap is in a heart-shaped metal box on my dresser. I keep some of the other items in plastic storage bags. His medals and campaign ribbons are displayed with his photograph and the precious flag that draped his coffin. I've wondered what I will do with his flag someday considering he left three children. How do you decide something like that?