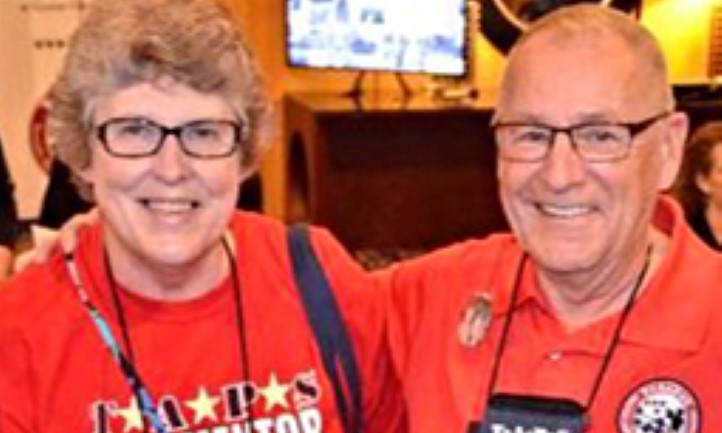 My wife and I found TAPS in May 2010 after my grandson's death by suicide the previous year. We were overwhelmed at our first TAPS National Military Survivor Seminar - to have to admit this loss is real is so difficult. But we found the family and comfort we needed.

My wife was determined to be a TAPS Peer Mentor. As a Marine who served in Vietnam, I wasn't sure I could be a mentor to another person because of my own post-traumatic stress. I was a bit hesitant, but I accompanied her to the training. And even though I was not signed up, TAPS encouraged me to complete the training, and I found myself joining the group. Through that training, I was equipped with the tools to take my own loss and grief and help others.

In the summer of 2012, the TAPS Peer Mentor team matched me with my third mentee Simon. Simon's son died by suicide earlier that year. I called Simon two or three times a month, never connecting directly with him but leaving messages or speaking with his brother. While Simon's brother said the calls were appreciated, Simon just couldn't talk. I never gave up. I continued calling and speaking with his brother for almost two years.

Then, in 2014, I was reading an old issue of the VFW magazine I had saved. The magazine listed the military deaths during the Afghanistan and Iraq conflicts. I read the list, and there was Simon's son's name. A thought came to me. Could this be another way to reach out to Simon and make that personal contact? I found his address and mailed the magazine and a card with a note to him. I still had not spoken with Simon one-on-one, but my phone rang at 6:30 the following Monday morning. It was Simon. He told me how grateful he was for the magazine, my card and all the phone calls to his brother. I was overwhelmed with happiness on so many levels. Our contact has continued to this day.

In September 2016, Simon indicated he was giving up. My peer mentor training kicked in, and I immediately contacted TAPS. The TAPS Peer Mentor program saved a life. Simon has thanked me many times for my help. He calls me his angel and says he would not be here if not for me. It's so powerful! The gifts Simon and my other mentees give me cannot be replaced. They have given me happiness, helped me to open up more and my post-traumatic stress symptoms have lessened. My mentees help me go on and honor my grandson's legacy.

This reluctant peer mentor is so grateful for TAPS.

Dana O'Brien is the surviving grandfather of Marine Cpl. Daniel O'Brien. Dana was born in Presque Isle, Maine. Dana joined the Marine Corps in 1966. During his time in Vietnam, he served with the 1st Battalion/9th Marines, The Walking Dead. Dana has three children, five grandchildren and two great-grandchildren. He lives in South Carolina with his wife.