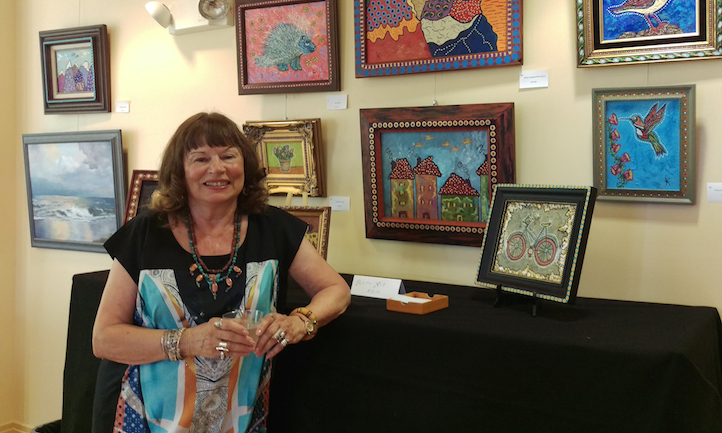 I never heard my father’s voice. There were photographs of him, and I know his handwriting from letters he wrote to my mother. But I always wondered how he sounded. Did his voice reflect the French Canadian dialect of his parents? Or did it have a masculine North Jersey sound to it? Was he soft spoken or a deep baritone? He died in World War II when I was just an infant, and I will never know. Louis La Pointe, my father, enlisted twice before the Army finally accepted him. The war was raging, and like most of his friends, he felt duty bound to defend his country.

After the war ended, my father’s friends returned home to the neighborhood and learned that their childhood friend was killed in action. His “old gang” from Jersey City’s DeKalb Avenue decided that they wanted to do something special to remember him. Someone asked the question, “What would Louie want?” I don’t know how long they tossed the idea around, but as a group, they finally agreed on an answer. He would want his daughter, Lois, to have the same opportunities he would have given her. And to them, that meant a college education. But how could a bunch of “regular Joes” make such a thing happen? They resolved to form an organization and raise the tuition money by sponsoring special fundraising events. It would be called The Louis La Pointe Association. Their decision changed my life.

I was only 2 years old, but my future was being decided by a group of men I didn’t even know. Every Christmas, Easter and birthday I would get dressed up in my best outfit because members of “The Club” were paying us a visit.

The only member that I clearly recall was Stanley Moore. He owned the local pub where they held meetings. He was the Club’s treasurer for life. It was assumed that because he was a businessman he could manage money. I guess the others took turns coming to see us, but Mr. Moore was a constant. Like caring uncles, they indulged me with special gifts. Once I received a gold locket with a real diamond chip in the center. I wore it for years until I lost it on a class trip. One Easter they presented me with a 3-foot-tall chocolate bunny. Right out of the store window. I was about to tell them that I didn’t like sweets, but my mother squeezed my hand as a signal and I kept quiet.

Every year, The Louis La Pointe Association held a dinner dance as a fundraiser. I dreaded attending. As a child, I felt self-conscious and awkward walking into the hall with my mother and hearing whispers of, “There’s little Lois.” But, of course, I had to be there. I didn’t understand that these events provided the means to build up my college fund. They were honoring my father’s memory by raising money for my future.

Thanks to the efforts of the La Pointe Association, I did attend college. When I received my degree in English I made a big decision. I asked myself how I could possibly repay the Club for all they had done for me. The answer was so obvious, and yet it had eluded me. Perhaps I could inspire children to succeed even if it seemed that the odds were against them. I was proof of that. My decision was to become a teacher.

Fortunately, there was a teacher shortage in New Jersey at the time, and I had three job offers. I applied for an “Emergency Teaching Certificate” and I walked into a sixth-grade classroom the September following my graduation. At the end of my first day, I realized that this was the place where I belonged. It meant returning to college at night to earn a permanent teaching certificate that was followed by a Master’s Degree. This time I was paying the tuition, and thanks to The Louis La Pointe Association, I was able to do it.

The highlight of my career came in 1987 when I became the New Jersey Teacher of the Year. At a large gathering that honored the outstanding teachers in each county, I stood at the microphone and told the story of a young man going off to war only to be killed on the battlefields of Italy. I held back his name, but I described the efforts of his friends to help his infant daughter achieve her potential. They wanted to provide her with tuition money for a college education. After many years of fundraising, they accomplished their goal. I explained how, as a college graduate, she wanted to pay back the gift of an education that they had given her. And so she chose a profession that would help children become all they could be. She became a teacher. I paused and closed my speech with the words, “That young man’s name was Pvt. Louis La Pointe, and I’m ‘Louie’ La Pointe’s daughter.” Amid the cheers and applause of 1,400 teachers, I could finally imagine my father’s voice. It was saying, “Good job, daughter, I am very proud of you and of my friends in the Club. Their friendship and loyalty have made all this possible.”

Read Lois’s complete story in “Chicken Soup for the Soul for Military Families.”