Celebrating the Life and Service of our Loved Ones

A petty officer in the Coast Guard, my 22-year-old son Paul died by suicide when he took his own life on July 18, 2012, in what was determined to be a homicide-suicide. He was just months away from completing his enlistment in the Coast Guard with hopes of pursuing a career in law enforcement. 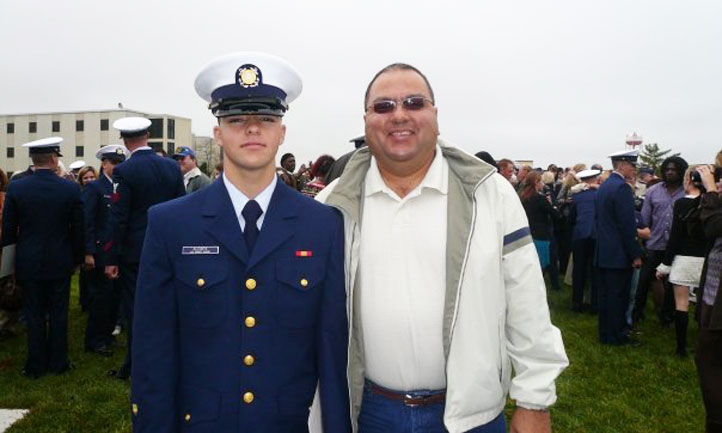 Prior to his death, Paul and our family embraced his time in the Coast Guard and I enjoyed his calls home telling me about the encounters during his various duties. As a military retiree, I already had a connection to the military community, but after Paul’s death, I felt lost with no connection – as if I no longer belonged to a community. Looking back, the connection in which I feel was lost was talking to my son about Coast Guard topics, such as stories in the news or when there was a new Coast Guard boat – and these are reminders of all I would have liked to discuss with him.

I served 22 years in the Air Force and Paul’s brother was serving as a Navy corpsman. At first, I felt that I had let my son down. As a veteran, I had attended suicide prevention briefings and studied the subject in preparation for promotions. Paul was seeking help for anger management issues and because he feared that seeking professional help might tarnish his military record, he did this independently from the Coast Guard. During his service, he hadn’t seen combat and he was never diagnosed or treated for post-traumatic stress or any other mental health diagnoses. With time behind us and in looking back, we now know there were signs that something wasn’t right.

My first priority was taking care of my family, and while I eventually found a therapist for my wife and a suicide survivors’ group in the area, something was still missing -- we had yet to meet anyone with a military connection -- but then I found TAPS and a safe place to talk about our loss. Then, we attended the TAPS National Military Suicide Survivor Seminar and found a deep connection with other people who understood our unique grief. This showed me that I wasn’t alone and I learned more about the issue of suicide that military families are facing. I also attended a local TAPS Care Group for support and learned the importance of taking care of myself. The facilitator used an analogy: just like the instructions given on a plane -- put on your own oxygen mask before helping someone else. That was something I could understand and I later sought counseling for myself, learning that it’s okay for men to shed tears and to share feelings.

In time, I become a TAPS Peer Mentor to support fellow survivors. This allowed me to reflect back on my experiences and understand the different emotions that one goes through in the grieving process. I also made the decision to step out of my comfort zone again and I attended a TAPS Men's Retreat. I had reservations at first, but knew there would be survivors of all manners of death, not just suicide loss, and I discovered I wasn’t alone. The other men reassured me of how I “belonged,” regardless of the way Paul died. Once again, I found a way to keep connections with Paul’s life and his military service. TAPS helped me understand how I celebrate the life Paul lived in selfless service to our nation. My wife noticed a difference in me and when looking at photos, she said that I “looked so happy.”

So what does the future look like for me? This year, I attended my fifth TAPS National Military Suicide Survivor Seminar in Phoenix. I helped facilitate a sharing group for survivors of homicide-suicide loss, making more connections with fellow Coast Guard families and volunteering my time to help other surviving military families. I wish I never had the need to “join” this family, but I'm glad I found them. They have been there for me on every step of my journey.

From the pen of…Mike Aldapa, surviving father of PO Paul Aldapa, is a California native, married over 33 years with three children and one grandson. He retired from the Air Force in 2000 after 22 years of service. Since then, Mike has worked for the City and County of San Francisco. He became a TAPS Peer Mentor in 2014 and has enjoyed assisting other survivors.