Now in its 12th year, the Colorado Celebrity Classic combined the several events we’d held in previous years into one spectacular weekend of music and golf.

It worked well. We netted just over $256,000 for TAPS, bringing the total of monies donated over the tenure of the CCC to almost $4 million! 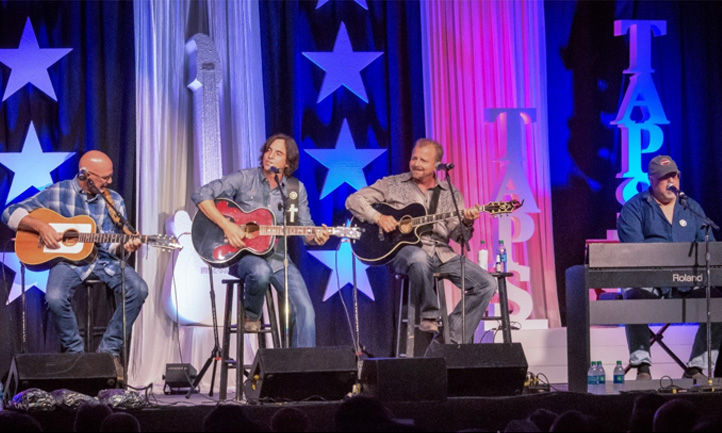 On Friday, June 16, more than 400 guests attended the Saluting our Fallen Heroes Dinner Concert. Held at the Grove Family Ranch at Cherry Creek, the spacious show barn was transformed into an intimate listening room with thousands of lights and patriotic-themed bunting.

Emcee Stephen Tubbs welcomed everyone and introduced Nashville songwriters, Billy Montana and Frank Myers, who sang “I’m Here for You”, an original tune they wrote for TAPS.

The evening’s entertainment was presented in two acts.  We opened with a Songwriters Show of story-telling and songs featuring Grammy and Country Music Award winning Nashville songwriters, Billy Montana, Frank Myers, Jimmy Nichols and Keni Thomas.  Together, these talented artists have written or produced 30 #1 hits and 4 Top 10 hits.  They were a big hit!

Act Two was as exceptional with the Grammy Award-winning, internationally renowned R&B/ Pop group, All-4-One. Delious Kennedy, Tony Borowiak, Alfred Nevarez, and Jamie Jones are still together as the original band.  The audience loved their performance, including “I Swear”, which has won multiple awards and was named by ASCAP as one of the greatest love songs ever and written by a TAPS favorite songwriter, Frank Myers. 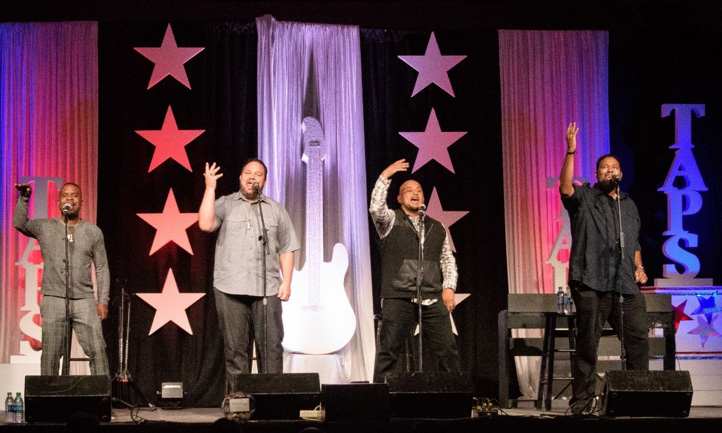 It’s important to note that the entertainers donated their talents for the cause.

Tony David & Wildefire performed during the dinner. The Coors Cowboys “Chuckwagon Crew” came all the way from Amarillo, Texas to prepare and serve an authentically-cooked western heritage meal; the pit-roasted prime rib was melt-in-your-mouth delicious. 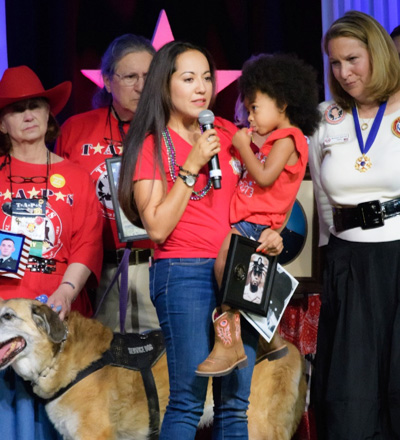 TAPS Founder and President Bonnie Carroll explained the tradition of wearing a button with a picture of the lost loved one, and she was joined on stage by 18 Colorado survivors.  TAPS Survivor, Laura Benton, told her personal story about her husband, Kevin Benton.

Kevin was an independent duty corpsman trained in tactical medicine. He spent 16 of his 19 years of service to America deployed on sea duty. He spent six years with the Marines, ten with Special Forces, and three years non-deployed at military clinics. Kevin and Laura, who was also in the Navy, were both stationed in Stuttgart, Germany and met at the commissary there through a mutual friend. Kevin and Laura were together for five years and had a daughter, Gabriela.  They lived in Virginia Beach when he died by suicide. TAPS reached out to Laura two weeks after Kevin’s death.

There was no Silent Auction this year, instead we put a lot of effort into the Live Auction, headed by volunteer extraordinaire, Liza Patton.  Seven packages were offered and included House Concerts, a Nashville Insiders Tour, an Elite Colorado Golf Experience at three private courses, a Make it Memorable Date Night with dinner and jewelry, a Romantic Mountain Get-Away with Trace Adkins concert tickets, and a special Denver Broncos tickets on the 50-yard line for a TAPS family. Additionally, guests could donate set amounts to offset expenses for various TAPS programs, seminars, and operations. The packages were amazing and sold for record-setting amounts, thanks to our generous gift donors and the talents of Auctioneer Roger Sierens.

On Saturday, June 17, 24 lucky golfers played 18 holes at the prestigious Eisenhower Golf Club at the US Air Force Academy near Colorado Springs.  Golf was followed with cocktails and a private dinner in the Eisenhower Room.

This year’s event was made possible by our 58 amazing volunteers, Title Sponsor, The Boeing Company, and the 125 private companies and individuals who donated products and services, and our Executive Committee, led by Directors Lynne and Bo Cottrell.

We are grateful to be part of TAPS and to help the families of America’s fallen heroes.