Now in our12th year, the TAPS Colorado Celebrity Classic combines the most favored elements from our past events into a ONE and ONLY event in 2017, the Saluting our Fallen Heroes Songwriters Show & Dinner Concert. Presenting Sponsors and Gold Sponsors will also enjoy a special day of golf at the USAFA Eisenhower Golf Club. 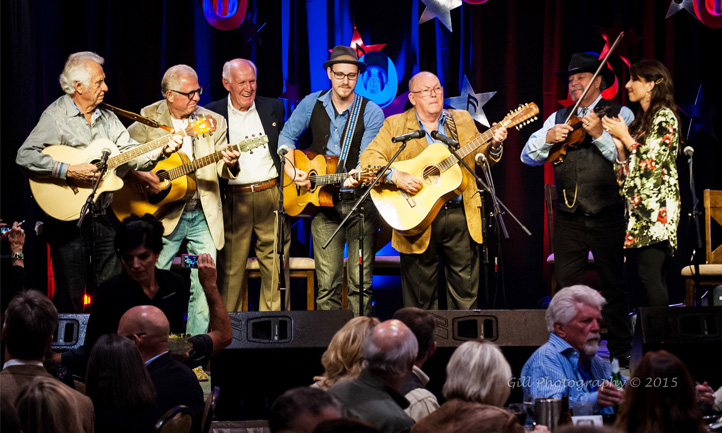 The TAPS Colorado Celebrity Classic began in 2006 when Lynne and Bo Cottrell took on the challenge of putting this unique and wonderful event together at the urging of Brigadier General Steve Ritchie, Retired, who served on the TAPS National Board.

Popular singer, songwriter and friend, Gary Morris, offered to serve as Celebrity Host, and entertainers, athletes and media personalities from all over America also quickly gave their support to our effort. Larry, Steve and Rudy Gatlin took the reins in 2010 and hosted again in 2011.

Helping to get the tournament off the ground was Jake Jabs, CEO of American Furniture Warehouse, who was our first Title Sponsor and continues to provide his support. David McIntyre, CEO of TriWest Healthcare Alliance stepped in for 2007-2008 and maintains his strong support. AIMCO and Bartlit Beck Herman Palenchar & Scott LLC were our Title Sponsors from 2009 through 2011 and AIMCO graciously continued from 2012 - 2013. We are grateful to the Dyk Family and the Harris Family for joining together to be our 2014 Title Sponsors. In 2015 and 2016, Jake Jabs and American Furniture Warehouse served as Title Sponsors.

We have also been very fortunate to have the involvement and endorsement of some of Colorado’s most prominent patriots! Please see this year’s list of distinguished Honorary Chairs, Corporate Committee and TAPS Patriots.

From our modest beginnings in 2006 raising $40,000, the TAPS Colorado Celebrity Classic has now presented close to $3.7 million to TAPS! This tremendous success is due to the generous support of elected officials, business leaders and corporations; the selfless donations of time and talent by numerous entertainers and other celebrities from all over the country; and, through the tireless efforts of a dedicated team of volunteers.

A significant part of the TAPS mission is to minister to the mental, emotional and spiritual welfare of the children of our fallen military, whose average ages are between 6 and 11. TAPS will hold its 23rd Annual National Military Survivor and Good Grief Camp in Washington, DC on Memorial Day weekend. Through the Good Grief Camp for Young Survivors, children learn coping skills through education and age-appropriate grief work activities, develop lasting friendships with others, and learn how America honors its fallen service members.

It had always been our dream to expand this concept throughout the country, and we are proud to say that the money raised by the TAPS Colorado Celebrity Classic funded the first regional Good Grief Camp for Young Survivors and Survivor Seminar at Fort Carson, Colorado in August 2007, and has continued every year thereafter. Your contribution funds the Colorado TAPS Regional Survivors Seminar and Good Grief Camp for Young Survivors, and helps underwrite the TAPS National Suicide Survivors Retreat, which was held last year in Colorado Springs.

We invite you to join our team! TAPS is the best organization to help the families of our fallen heroes who have given their lives in service to our great country. To learn more about TAPS, return to the TAPS home page.