November 16 is Children’s Grief Awareness Day.  As leaders in the field of children’s grief, TAPS works with partners like New York Life, The Moyer Foundation and the National Alliance for Grieving Children to provide cutting edge support and care to our youngest survivors who are grieving the loss of a loved one in military service.  New York Life just released the findings of the New York Life Foundation 2017 Childhood Bereavement Survey. Together we want to help encourage conversations about supporting grieving children and families on Children's Grief Awareness Day and beyond. 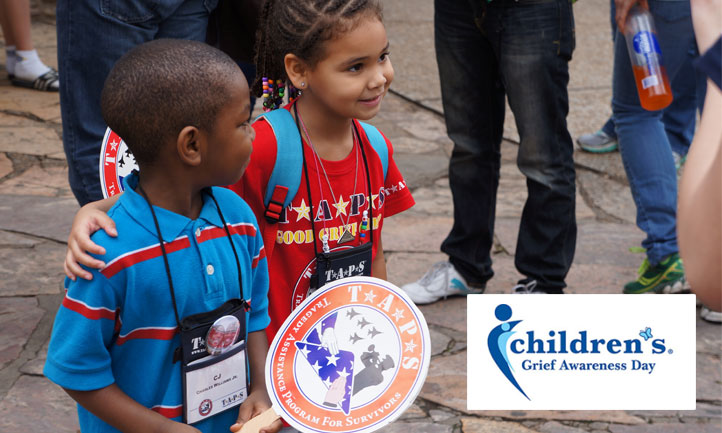 They reported that key survey findings include:

TAPS annual National and Regional Good Grief Camps help thousands of children ages 4-18 learn how to cope with their grief, find support and resources throughout their childhood and remain connected with the military through their military mentors. Many of our Good Grief campers grow up to share their own challenges of losing a parent with younger children new to loss. One Legacy Mentor said, "Nearly 20 years after my first Good Grief Camp, I now get to pay back some small piece of the incredible benefits I received from TAPS by mentoring kids who now stand where I once stood." Stories like that of Capt. Nathaniel Lee, USAF prove that long-term support and care for grieving children changes lives and better prepares children to model healthy grief practices and grow into well-adjusted adults who share their experiences with others.

TAPS is proud to stand with our partners in efforts to raise awareness for Children’s Grief Awareness Day.