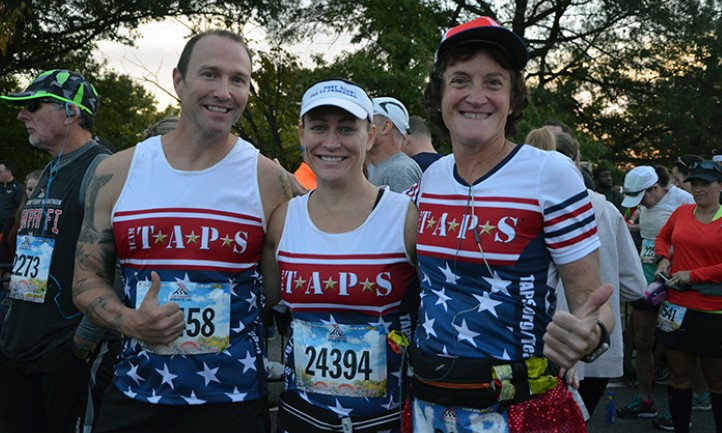 Just like grief, running is a journey, not a destination. My journey with running began nearly 41 years ago. While I was once pretty fast and I was a collegiate runner, I run for other reasons now. Running is the essence of who I am and it is the gift that I give myself. When my husband, Phil, was killed nearly six years ago, running became my way forward. It allowed me to process the tears, the fears, the confusion, the devastation and, at times, the misplaced anger. Here are seven lessons I've learned about my grief as I've pounded the pavement:

1. Focus on the next step. I have run 113 marathons. Never once did I think I had a marathon in the basket. I know the race will hurt. I am going to want to quit. I may fall down. I may veer off course for a brief time. But if I concentrate only on the step ahead, I will get there.

2. Go places you never thought possible. Running has given me a hard fought independence. I didn't know who I was when I became a widow and my children all left the house. Last year, I ran the Great Wall of China Marathon because it was the last thing on my first bucket list. I pushed myself out of my comfort zone. It was the hardest marathon I have ever completed - both physically exhausting and liberating.

3. Trust your training, your body and yourself. People always want to tell a griever how to grieve and to put a timeline on grief. I had doctors try to prescribe antidepressants and sleeping pills shortly after Phil's death. I had friends want to ply me with alcohol or set me up on a date. I knew none of those would help and I would feel worse in the long run. Running is about trusting one's training, body and self, when everything screams to quit. Yes, it hurts. Yes, I want to quit. But I will continue to pursue the finish line.

4. Find a spark of hope. I used to run status quo, wearing all black and thinking it made me look thinner. After Phil's death, I was tired of darkness. I started wearing pink, sparkles and costumes. I now run happy. Humor is part of spiritual resiliency. Thus, if one can genuinely find laughter in grief, it can be a jump start. Humor produces optimism; optimism produces hope in what lies ahead.

5. There is light to be had in the darkness. Running gets me outside in the light. In my darkest hours, I lace up my running shoes and run until the moment of heartache has passed. I always feel better when I am finished. It quiets my soul and drives out the darkness.

6. Connecting helps on the journey. Running has brought me to people and untold friendships. Grief is isolating, and as a shy introvert, I withdrew into my house after Phil's death. I ran the Vermont Marathon just weeks after Phil was killed. I will never forget the runners who came out to support me and to laugh with me when my polka-dotted skirt fell down mid-race. Team TAPS has allowed me to connect in a comfortable and safe way with other surviving families. I wasn't comfortable talking about my grief initially, but these connections gave me a way to reconnect to a world I thought I wanted no part of.

7. You can face your fears. I was at the Boston Marathon in 2013. One stop light from the finish line. I could see the end, and as I pressed on, the first boom hit. While I was processing what that boom meant, the second blast came as mass chaos erupted all around me. I ran for my life and found myself cowering about a half mile from the finish line. That day lives in my nightmares and flashbacks, but in 2016, I took back my finish line. I simply could not let terrorism take my running too.

Running is my journey of life and living. It isn't always easy, but I run the road ahead, one step at a time, and know that I honor Phil and myself.

Are you ready to find your own resilience? To find your feet on your grief journey and connect with others who are part of Team TAPS, register now to secure a spot in the Marine Corps Marathon or Army Ten-Miler.

Linda K. Ambard is the surviving spouse of Maj. Phil Ambard, killed in action in April 2011. She works as a violence prevention specialist and in resiliency for the Air Force at Whiteman Air Force Base in Missouri. Linda has completed 113 marathons to include the Great Wall of China Marathon and the Boston Marathon. She is the author of "Courageously Alive--A Walk through Military Loss."