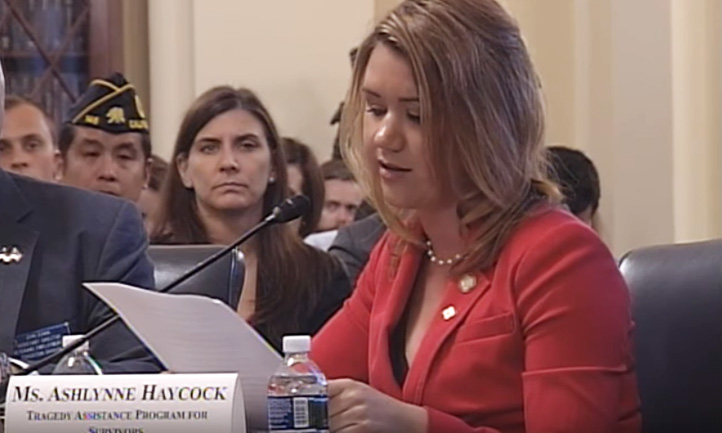 I lost my mother Air Force Veteran Nichole Haycock to suicide when I was only 19 years old, which is a really complicated age. Legally, I was an adult and had to make adult decisions, but in my mind I was way too young to be making these decisions. After all, I still called my mom to ask what temperature was to wash my laundry. I didn’t know how to make adult decisions without her. Six years later, I have accomplished more then I ever thought I would, but there are still so many things I wish I could share with her, like these:

1. I’ve carried on her legacy.

I would follow my mom around Capitol Hill and was always amazed by her grace. I thought the work she did was the most amazing thing, which is why I wanted to go to college in D.C. and study government; I wanted to continue her work. And I have.

This year, I have advocated for a bill to expand GI Bill benefits for veterans and survivors. It expands the work she was doing when I was in high school. Last week, I testified before Congress on the expansion, and all I could think about was how much she would have enjoyed being there. It gave me the strength I needed to be up there.

2. I never wanted to be her, but I’ve picked up where she left off.

My mom was always my go-to call for everything. If I had a question about when to get my oil changed or needed someone to listen to me freak out over a term paper, she was always there.

Now, my brother is in college and he calls me for the same things. I have answered questions on how to deposit a check and pretended to be him to make doctor appointments because he doesn’t want to do it. All the things she used to do for me, I now do for him. I do it because I know she would want me to.

In high school I used to “borrow” her pearls all the time. She used to come yelling down the hallway for me to give them back. She and I made a deal that I would inherit them when I got married, but she would let me wear them on very special occasions. I inherited them much sooner than I would have liked, but I have kept my promise to only where them on special occasions.

In the last six years, I have worn them three times - at her funeral, the day I graduated college and last week when I testified before Congress (all occasions I think she would have approved).

4. I still go to our favorite places.

While we were visiting D.C. one time, we wandered into this cute little tavern in Georgetown. We loved it so much that every time my mom visited me in college, we made a point to go there. It was our thing. For a while, I couldn’t go there. Now, I eat there every year on her birthday and angelversary. I can feel her presence there in a way that I don’t often feel anymore.

From the pen of…
Ashlynne Haycock is currently the Senior Coordinator for Education Support Services for TAPS. She is the surviving daughter of Army Sgt. 1st Class Jeffrey Haycock, who died in the line of duty in 2002, and Air Force Veteran Nichole Haycock, who died by suicide in 2011.