In high school, I ran to be the best, but stopped running competitively due to injuries in 2000. Now I run for a totally different reason. 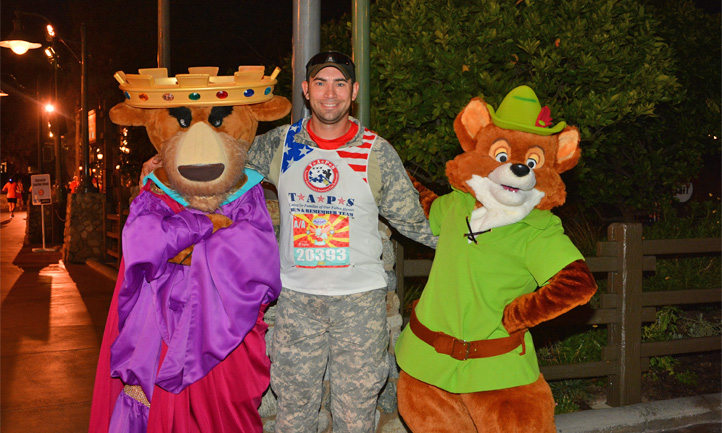 I started running road races again in 2012. This time, I wasn’t on a quest for the golden fleece but needed an outlet to honor Soldiers with whom I served.  From the high school classmate who became a Marine, and a Ranger buddy with whom I spent 62 awesome days, to the Mogadishu Ranger mentor at Mountain Warfare School, the SEAL I came to know through his father and the officer whose scholarship I received at the University of Oklahoma.

When I take to the streets with my boots laced tightly, I carry their memories with me. Their memories often trigger a tear. Most of the time, the tears are with gratitude that they served and saw me through some of the worst times in combat, allowing me to run today.

It’s not about time. I do not train. I run to bring awareness to TAPS and the men whose images I carry on the back of my race singlet. A successful race is when someone asks me about these brave men. As fellow runners pass me, some thank me for my service; some give me fists bumps. I only hope that these runners look further into TAPS when they return home.

I also run to give back to an organization I know is helping families find their new normal after suffering the loss of a loved one who has served in our nation’s Armed Forces. As a mentor, senior mentor and group leader at TAPS Good Grief Camps over the years, I’ve seen remarkable growth and healing in the lives of young survivors. I know with confidence that the funds I raise go into the programming that supports them.

So for me, running for TAPS is two-fold: 1. I honor the men I run for and 2. I fundraise to support families of our fallen service members.

Running at Disneyland over the past year has been great. I ran every 2015 race there minus one. By far, the greatest run was the Disneyland Half Marathon. Team TAPS was there in full force. I always enjoy meeting other members of Team TAPS, whether they are survivors, fellow service members or individuals who have joined just to take part in the run.

It is amazing to see everyone come together to support TAPS. Many times I am the lone Team TAPS runner on a course, so when I race with fellow Team TAPS runner I get excited. The miles are many and I always hope I provide a little boost by sharing words of purpose with them.