Football is a favorite pastime for many Americans, but for many of us in the TAPS family it's more than that - it's a special connection shared with our fallen heroes. 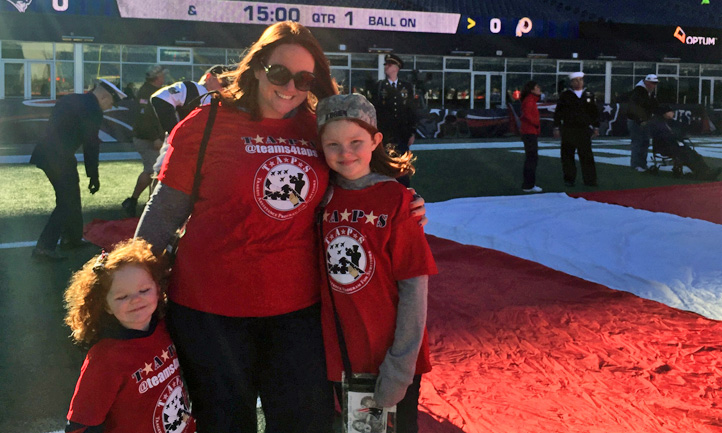 "Every game day when my husband was with us, he would have all our Patriots outfits laid out, ribs on the grill and nachos in the oven. Our two girls, Lani and Loralei, were his little cheerleaders and enjoyed the game as much as he did," Siobhan O'Brien, surviving wife of Gregg O'Brien, recalls. "After Gregg passed, our oldest, Lani, transformed into her version of a tomboy and wears Patriots apparel every day. It's her way of keeping her dad with her."

Thanks to a special partnership between teams4taps and the NFL, the O'Brien family and other TAPS survivors have been able to honor their loved ones alongside their favorite NFL teams and football players at games, training camps and more.

In November 2015, Siobhan O'Brien and her daughters took the field at a New England Patriots' game to help carry the American flag and see their dad honored on the Jumbotron. teams4taps was thrilled to work with the team to make this happen after Siobhan shared her family's memories about the Patriots with teams4taps staff.

Halfway across the country, Don Lipstein, surviving father of Josh Lipstein, was able to stand on the field of his favorite team, the Denver Broncos, to honor his son. teams4taps helped create this lasting memory for Don and his family after he shared a photo of Josh in a Broncos jersey on social media.

The Kalafut family got to interact with NFL players in a different setting after responding to a teams4taps invitation. Mary and her three sons, Christopher, Keegan and Michael, toured the Georgia Aquarium and World of Coke with Atlanta Falcons player Matt Bryant and went on a Christmas shopping trip with Pat DiMarco and other players as part of the Shop with a Jock program.

Mary said the experiences her family has had with the Falcons has been meaningful in their grief journey. "It's a glimmer of happiness, or joy, back in our lives. So I think that's helped with the whole healing process."

teams4taps will continue to work with NFL teams across the country for the 2016-2017 season to remember and honor our fallen heroes. Plans are underway for honors with the Atlanta Falcons, Carolina Panthers, Los Angeles Rams and Oakland Raiders, to name a few.

Be on the lookout for details about upcoming event opportunities via email and social media and check out our special events calendar for upcoming teams4taps events. Remember, if you have a special memory or connection to a team or player, please share your story by emailing teams4taps@taps.org.