The picture today comes from Allicia, daughter of Burr, who sent it for use in the Saturday Morning Message. It seemed like a good photo to share as it shows a road and some beautiful mountains in Utah. Whether you have decided to stay in your home or move, driving down a road and looking at the scenery can be a relaxing thing to do. This week, there were many replies to the question from Caryn, mother of Nathan , about moving or staying in the place you shared with your loved one and how you handle going to places that were special if you decide to stay, so I will keep my comments short. Thanks to all those who read the Saturday Morning Message and also those who shared their experiences this week. 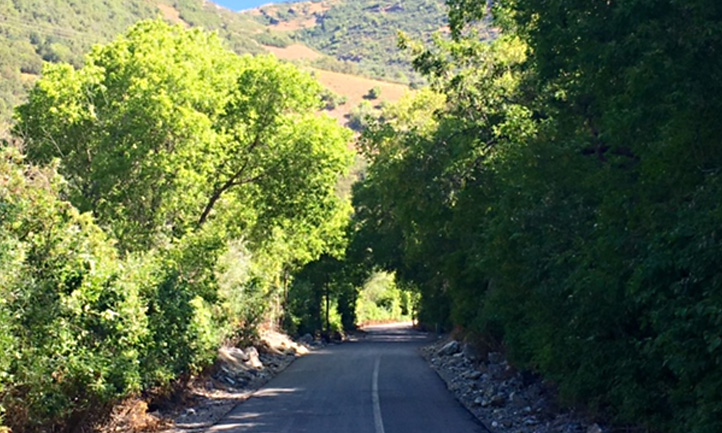 This week, we are going to use a question that came from the editor of the TAPS Magazine: "As we face the holidays, what words would you share with a new survivor to convey the message that there will come a day when you can put up the ornaments, send a Christmas card, start a new family tradition, etc.?" We look forward to your replies.

Mary, mother of Nick, sent the song of the week. I included a link that shows the song lyrics since Mary felt they showed the way her son lived his life.

Mary wrote, "Oct. 21 was the 10-year anniversary of my son, and only child, being killed in Ramadi, Iraq. My son faced many challenges throughout his lifetime. One of the most difficult was losing his father to a sudden heart attack when he was just 12 years old.

The song "Drive" by Incubus was one of Nick's favorite songs. He even had his cellphone ringer set with the words from the song: 'Whatever tomorrow brings, I'll be there with open arms and open eyes.'

This was how my son, Nick, lived his life, with strength and perseverance. Only a couple of weeks before he was killed, his Humvee hit an IED and he suffered loss of consciousness with a level-three concussion. He was back out on patrol two days later. Nick knew that every moment over there might be his last moment on earth, and yet he faced the dangers. I miss him more with every breath that I take, and as I read the words to his favorite song, I will try to face my fears, especially in living life to the fullest without my beautiful son, Nick, here with me.

This year, a Team TAPS runner will be running the Marine Corp Marathon in honor of Nick. I told him about Nick's song, and he said he would be blasting it as he started the marathon.

From Leslie, mother of Eugene:  I raised my sons by myself for 26 years in the town where they went to school and basically grew up. After my son passed, I couldn't look at the walls. I moved about two months afterward.

They say you take your problems with you when you move. This is true, but I found it easier to be in a new place and in a new town making new memories.

From Merry, mother of Wesley:  It occurred to me to travel around where Wes was residing when he was first in the Marine Corps. I would have loved to be next to Camp Pendleton, Fort Sill, etc., but I don't know if we would have seen each other more than living in Colorado. Eric and his wife live in California now because she is still in the Reserves out of Camp Pendleton, but I have no interest in living in California. I'm going to have to make a decision about where to live in the next four or five years and get the house ready during that time to move out or rent.

From Susan, spouse of Charles: That's a very good question :) It was a blessing to me to be able to stay in the home we shared. The change of losing him unexpectedly was difficult enough, without having to move as well. It's been a little over a year now, and I feel like I could move if I needed or wanted, but it was a precious cocoon for to me to rest in. My little dog and I added another little dog "to keep us company," and that has been a blessing. She's a sweet, little rescue who came from another widow, and she needs lots of hugs, which matches my need to hug! These are pictures of Mickey (brown) and Daisy (blonde) relaxing at the pool here at home during the summer. 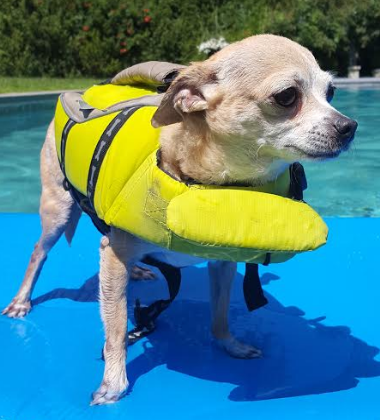 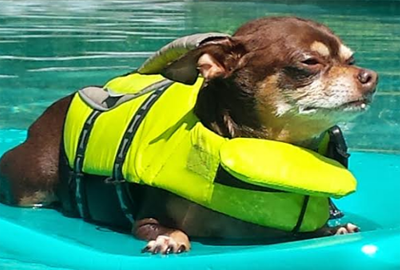 From Robert, father of Louis:  When we pass a location where he used to live or work we tend to go quiet and get a bit sad. It's been 11 years, but that is still our reaction.

We love this house and the memories we have and intend to leave home "feet first." At home, the good memories outweigh the bad and always will.

From Diane, mother of Caleb:  I've had no problem living in our home with all the memories. It soothes my soul seeing us around the dining room table or sitting in the family room. Even though his bedroom isn't the same as it was when he was home, it's still Caleb's room to me.  Sure, it's sad at the same time. I miss him a lot. It's hard not having him here, but we shared so many wonderful times here at home that the happy memories in our home bring me comfort.

As for those places/events I shared with Caleb, memories are all over our little town. It's sad but good. I miss him but am so glad for the little while we were able to share his wonderful life. There are a few things that are really hard for me, though. I have a hard time when we go to California where he was based, where he last lived. It's usually the hardest the first day or two, but then I'm glad we're there and I don't want to leave! I find comfort in being places where Caleb's been, even though it's hard. As for events, school events have been hard, but I have attended a few high school football games. The first game I went to was so hard. It didn't seem that long ago that Caleb was No. 1 on the field. But now, no longer was he in high school, he wasn't even on this earth. THAT was hard. I haven't attended band concerts yet but maybe one day. Caleb played the trombone, and for some reason, that wound is still too raw. I don't know why. Things just don't always make sense, and that, I have found, is part of the journey.

From Linda, mother of Eric:  My son never lived in the house I am living in now, but I know people who regret moving or selling a house that has all those beautiful memories. They found it painful in the beginning but comforting after some time has passed and they have done some grief work via therapy or whatever. Several therapists told me NOT to make any major decisions in the first years, for sure. I found that advise to be very true.

Traveling in the same areas after roughly five years made me smile. I could cherish all those childhood memories of my son at the park, skating rink, the school he attended, etc. Those public places are where I go to find the most peace when I'm missing my son most. I feel his happiness.