Survivors from many parts of the country want to know what to expect before they go to a TAPS event. For many, it may be helpful to read a bit about what others have found when they traveled to a TAPS event. In the most recent TAPS Magazine, there is an article titled "What to Expect at a Seminar" by Dr. Carla Stumpf-Patton that describes how you will meet TAPS staff and other survivors when you attend a Seminar as well as what is offered at a Seminar. The article also talks about how it is normal to be nervous when you first come through the doors, but you will meet others who have had a similar experience and will welcome you with open arms and warm hugs. 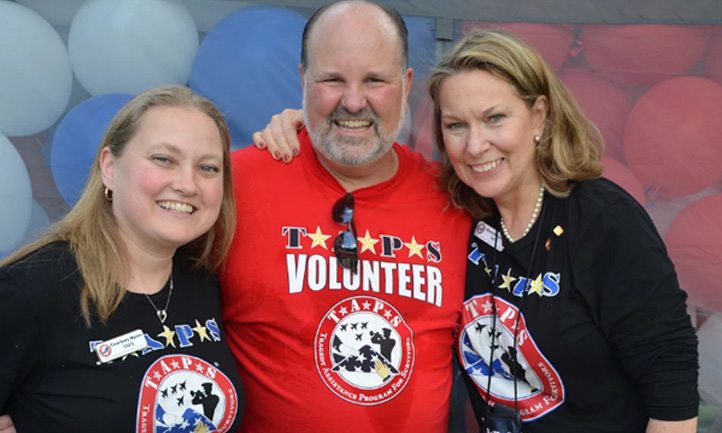 In this issue of the Saturday Morning Message, two survivors talk about their experiences at Seminars and one survivor describes her experience at Retreats. We hope you will read this installment and think about joining your TAPS family at event. You can find a full list of upcoming events on our TAPS calendar.

Caryn, mother of Nathan , sent in the question for this week. Caryn wrote that, lately, she has found it uncomfortable driving around her state. Her question is, "For those who lived in the same home with their loved one, did you ever feel the need to move? Or was it easier to stay put? How do you handle traveling around the same areas (city, town, vacation spots, etc.) you shared with your loved one?"

♫  Song for the Week

Allicia, daughter of Burr,  sent the songs this week. She wrote, "I've had a lot of God winks in my life that have given me a treasured relationship with my dad, Burr N. Johnson III, who was killed in the Navy via homicide when I was 2 years old. One of the most dramatic and long-lasting God winks relates to Kenny Loggins' song 'House at Pooh Corner.' Mom used to play it on the piano and sing it to me. Every time she played it, I felt a combination of love and sadness I didn't really understand but just naturally knew Daddy used it as my lullaby. Years later, when I was 20 years old and I was in beauty school, I heard a familiar chorus that brought tears to my eyes. Kenny Loggins released a new version of the song for kids with an added verse at the end called 'Return to Pooh Corner.' A few years after that I was able to meet Kenny Loggins in person and thank him for creating what was the closest thing to a memory I have of my dad."

From Diane, mother of Caleb:  My fondest memories are from the first TAPS event I attended about six months after my son went to heaven. I was apprehensive and when I walked into the room, I wanted to turn around and walk back out the door. I decided to stay since I had traveled three hours to get there. The girls at the welcome table were very kind, which helped a lot. I wasn't sure about anything, and when I attended the workshops I was taken aback by the transparency of so many broken people like myself. Bonnie Carroll was one of the facilitators, and her sweet spirit and understanding warmed my broken heart. I met some Gold Star moms who are some of my closest friends to this day. I felt like that event was the beginning of knowing that I really wasn't alone. There were others walking this journey and there were people who really cared. Thanks, TAPS.

From Allicia, daughter of Burr:  I've only been to one so far, and there are just too many memories to choose from. Nationals changed my life in such a good way! If I had to narrow it down to one thing it would be the almost-instantaneous deep friendships I made. I've been involved with a lot of wonderful organizations my entire life. I'm a social girl, always have been. I went to girls' camp every year as a teenager, I was in a sorority in college, I have a huge family and I've worked with conventions for years. I have been involved in so many awesome groups and have made some incredible friends, but nothing compares to the experiences I had at TAPS and the immediate feeling of "family" that embraced me the minute I got to Nationals. I was nervous and worried that where I was in my grief (it has been a loooonnnggg time since Dad died) that I would feel out of place. I had just traveled cross-country and hadn't met anyone in person, so I definitely felt like I would be a fish out of water. I remember walking down the hall early the first day since I was going to Peer Mentor training and standing starstruck as the first person I saw was THE Bonnie Carroll, a hero of mine since I first learned about TAPS, at the end of the hallway. She walked toward me and gave me a big hug and actually knew who I was! Talk about being welcomed to the family in a big way! That was the first of countless hugs I received from the greatest people! Another highlight was turning a corner in the hotel and running into a dear Facebook friend who actually told me about TAPS. That was the first time we met in person.

The friendships since have been priceless to me. I take my Tuesday nights to participate in the online chat or video chat, and I look forward to them. I was talking with a friend yesterday, whom I met during the God winks class, and the subject of Nationals came up: "Well, you're going this year, right?" And even though this past May was the first Nationals for both of us and we were both nervous to go, it was just a given that we will be there again this next year. So for those of you who haven't decided yet, JUST DO IT! I came so close to backing out last minute. Whatever event works best for you, just go - and you will want to go back! :)

From Janet, mother of Steven:  My fondest memories of TAPS events are the friendships formed and the chance to smile and laugh again without judgement. I enjoy meeting up with my TAPS family at the Seminars, but I enjoy the Retreats the most. At the Retreat, we are with a smaller group of survivors. The smaller group allows for better opportunity to meet and get to know people. Activities are planned to get us outside our comfort zone while forming bonds with our new families. The staff go above and beyond to make it a meaningful experience.

This past summer, I joined a group of women in Milwaukee. This was my third Retreat. We enjoyed kayaking on the river and a yoga class. The best part was the walking food tour that started out in a downpour. We were soaked but no one cared as we were treated to some delicious food and drinks at some of Milwaukee's most famous restaurants. As we finished our trip, we started our own Facebook page so that we can post our photos and keep in contact. I look forward to seeing the Retreat schedule for next year.