Last week's question asked how to turn the anger that comes with grief into more of a focus on the pride for our loved one's service. This is a tricky question as it asks us to focus on ourselves, and that is something many of us are not taught to do. First, we must find strategies to help reduce the anger. This is where looking in the TAPS Magazine archives can be helpful. 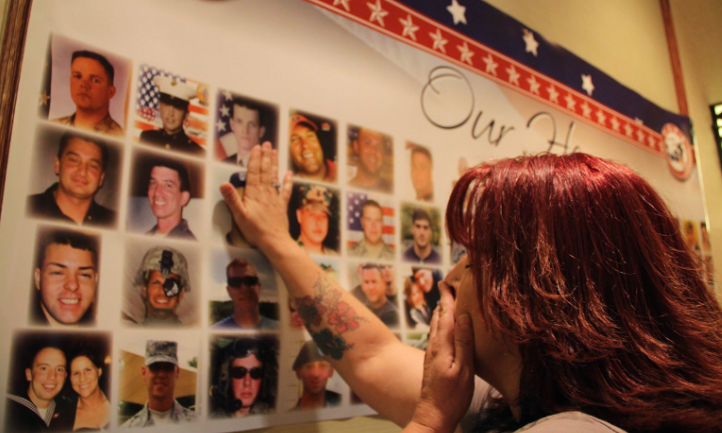 In an article written by Susan R. Blankenship and Rebecca I. Porter,  titled "Physical Reactions to Loss and Grief: It Isn't All in Your Head (or Your Heart)," the authors offer some ways to help reduce the stress of grief:

In addition to these ideas, I would like to add listening to music. Andy, father of Danny,  makes a playlist on Spotify of the songs that appear in the Saturday Morning Messages   along with a few other songs special to him. The playlist is free and called "Tragedy Assistance Program for Survivors Songs of Love and Remembrance." He has also started a new playlist for the holiday songs survivors sent called "TAPS Holiday Music While we Grieve" You can continue to send in your favorite holiday songs in addition to songs that remind you of your loved one.

Survivors have sent in their approaches to releasing the anger they sometimes feel in grief. I hope you can find comfort from their responses. Thank you to all who responded this week as well as those who read the message.

Would you like to share a question or read how other survivors respond to a topic or question you have? I would love to gather some thoughts for future Saturday Morning Messages. It can be helpful to read about how others cope. If you would like to send a message thanking one or all of those who wrote this week, send it to me and I will make sure your thoughts are passed along to them.

This Thursday is Thanksgiving, so there will be a short Saturday Morning Message on Nov. 26. Therefore, I am going to pose a question that can be answered anytime from today until Nov. 29. The question is: What has made you most thankful on your grief journey?  I look forward to your responses.

♫  Song for the Week

Michele, mother of Stephen,  sent the song of the week along with her comments. Michele wrote, "My son, Stephen, was such an old soul. I always said he was born in the wrong era. One of my wonderful memories was seeing him come up the driveway on a nice, sunny, warm day, with the biggest smile on his face, his windows down in his SUV, playing "Ain't that a Kick in the Head" sung by Dean Martin. He really liked listening to him in addition to Frank Sinatra and Louis Armstrong. It was hard listening to Dean's song without shedding tears, but now it is a memory that warms my heart."

Karl, father of Tre,  sent this song to be added to the holiday list. Karl wrote, "My favorite Christmas song is "O Holy Night" sung by the Vienna Boys Choir. Purely angelic."

From Karl, father of Tre:  Wow! I have the same problem. I go from sad to angry and back again. I think the anger was something felt because I did not get the cooperation that would have saved his life. Sometimes, I'm just angry at him for leaving me. Everytime I hear of another soldier being killed over there, I am angry and so saddened. I take it quite personally now. His sixth-year angelversary is coming up on the 28th, and I STILL do not celebrate Thanksgiving. I run away somewhere every year.

It probably sounds crazy, but I started going to casinos. I also went on a cruise the second year when his angelversary was actually Thanksgiving Day. I got off the ship in Mexico by myself. I went up into an observation tower and cried. The lights, noise and all the people in the casinos take my mind off the holiday and the "dreadful" day. I prefer to be around strangers because they don't know my situation, and I feel I can pretend to be somebody else. You know, somebody who hasn't lost a child. I can then fake it, sort of. If I go around family I just think of him as a boy playing with his cousins and I see them growing up. I love them but just can't be around them at this time. I love driving through the mountains or walking on the beach - anywhere but home with my thoughts.

You need to remember the life your son lived. Do not concentrate on the day he died; it takes away from his life. Bring Eric back into your life by telling stories, remembering all he did from a tot to a grown man. Let others tell about the Eric they knew. You would be surprised at what they say.

The anger gets you nowhere. There is no answer to WHY. And the truth is you don't need the answer - you need to remember his love.

From Diane, mother of Caleb:  When I first read the question, I thought, I haven't been angry. Then, I thought again. I have been angry. Angry that it happened. It didn't have to, you know. I've been angry that Caleb isn't here with us and he should be. Angry at God? At times, yes, and I've let him know. I don't know what happened to this mom's son. I know what happened with Caleb - as much as we can know. Even if I've been angry, I'm still so proud of my son, proud of the man he became, proud of the way he lived his life. I don't know her situation, so I can't say how to stop being angry. My heart goes out to her, though. I've been angry at times, but not for long. When I have been, I talk to God about it. Cry to him. I've shouted at him, but I  take it to him. That has helped me to deal with any anger. Then there is peace.